Wedding Cake and the Colts 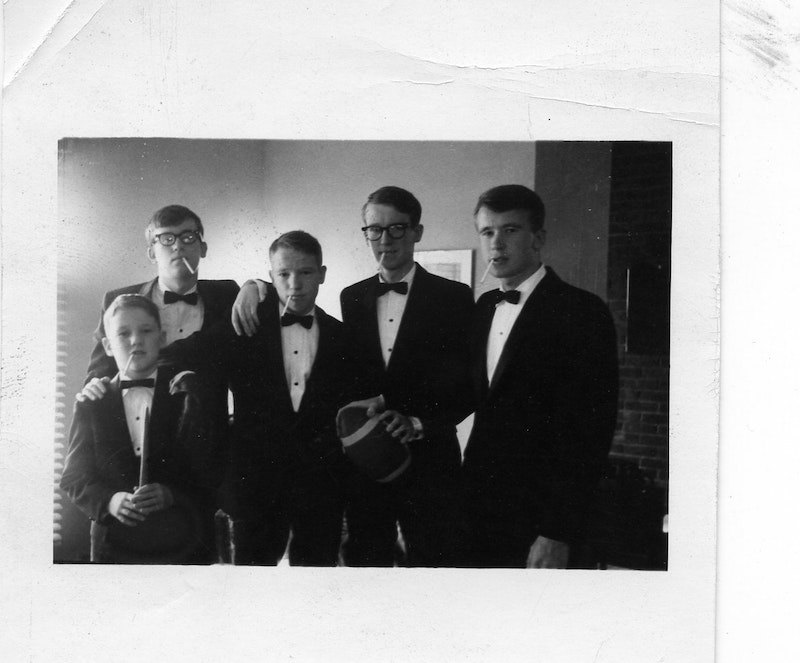 The first wedding I ever attended was at a Lutheran church in northern New Jersey, where my oldest brother Randy was betrothed to a lovely woman named Kathy whom he met at Cornell University. As the picture above shows, my four brothers and I, fixed up in rented monkey suits, were in a jovial mood that morning, Dec. 26, 1965. I can’t recall whose idea it was to have us dangle cigarettes out of our mouths. Probably not our parents, although as was the custom at the time, ashtrays sat on a half dozen tables throughout the house.

It was an evening affair, and the car ride from Huntington, Long Island to the Jersey destination wasn’t an easy one: not surprisingly, there was filthy black and yellow snow on the ground and the ’65 turnpikes were somewhat hazardous. The wedding itself was sort of a blur: at 10, I was the youngest usher, and was fairly nervous escorting guests down the aisle. I barely remember the reception, held at a typical middle-class hall, although I think I ate a lot of Swedish meatballs. After a long day, I was exhausted, and took a short snooze while the adults danced to a live band playing polka that was foreign to me: let’s just say it wasn’t the Kinks or Byrds (later on, I’m told, more contemporary tunes—Stones, Chubby Checker, Del Shannon, The Beatles—were attempted by the guys in suits).

There was some talk the following day that one of my brothers, Doug, 18, spent a fair amount of time in the john, ralphing after partaking too enthusiastically of the bottomless pitchers of beer at each table. Given my age, my mother hushed the chatter (she always concocted a “cover story” for untoward incidents), but within earshot—the “little pitchers have big ears” old saw—I got the gist. And it barely registered. It all seemed normal to me; I didn’t even notice that my 15-year-old brother was also imbibing, drawing a gentle scold from Mom, and a “boys will be boys” smile from Dad.

In fact, my clear-as-a-bell remembrance from that day was the drive to Jersey, all seven of us stuffed in a Dodge station wagon. Actually, now that I think about it, there was an eighth passenger: Eddie Hafner, our next-door neighbor and close friend of my two oldest brothers, hitched a ride. Unlike a lot of “older” guys, who ignored or tolerated me, the runt of the family, Eddie was kind-hearted and made an effort to engage me in conversation. I was especially appreciative that he called me “Cat,” in the Maynard G. Krebs lingo of the early 60s.

As my dad drove carefully to avoid ice patches, I strained to hear the Baltimore Colts/Green Bay Packers playoff game on the radio. I don’t care for football anymore, but back then I was a huge Colts fans—Doug was a freshman at Johns Hopkins in Baltimore, and on a fall visit there (which is when I decided I wanted to attend JHU; I’d never seen anything like the then-wondrous and thriving Lexington Market) he told me about a game he saw at the old Memorial Stadium, and his description was so vivid and larded with hyperbole that right then, on the spot, I decided to be legendary quarterback Johnny Unitas’ biggest fan on Long Island. The Colts and rival Green Bay Packers had ended the 14-game season tied for first in the Western Conference with identical 10-3-1 records.

Johnny U., injured a few weeks prior to the game, was shelved, as was his back-up Gary Cuozzo, so Colts coach Don Shula was forced to rely on Tom Matte, a halfback who became the emergency QB. The Colts led early on, with Matte wearing hand-written plays from the bench on his wrist, but Packers kicker Don Chandler connected on a controversial field goal with 1:38 left in the game to draw even at 10-10. Even in the car I felt like I was at Green Bay’s Lambeau Field, howling at the refs for a botched call. It still burns me. As we drove into New Jersey, the game, now going in and out on the radio, ended in “sudden death,” on another Chandler field goal, and the Colts hung up their cleats. No one else in the car was paying attention—although my brother Jeff, an enormous sports fan, caught highlights in between the banter—so my “loss,” particularly on such a scrapbook day, went unnoticed.

A few years later, when the Colts were stunned by Joe Namath and the Jets in the third Super Bowl, I lost a bundle of cash (50 smackers) on bets, depleting my snow-shoveling stash, and even worse, had to face the music at junior high the next day. Not long after, I converted to a one-sport guy, the Red Sox, and am barely cognizant of football results today, except for the periodic news of NFL thugs receiving wrist-slaps for heinous crimes.

Yet that Dec. 26 was an action-packed and delightful day. A bonus was that my now-married brother was given a draft deferment from Vietnam—as LBJ escalated the war, that option was soon eliminated—and two years later my first niece became part of the family.