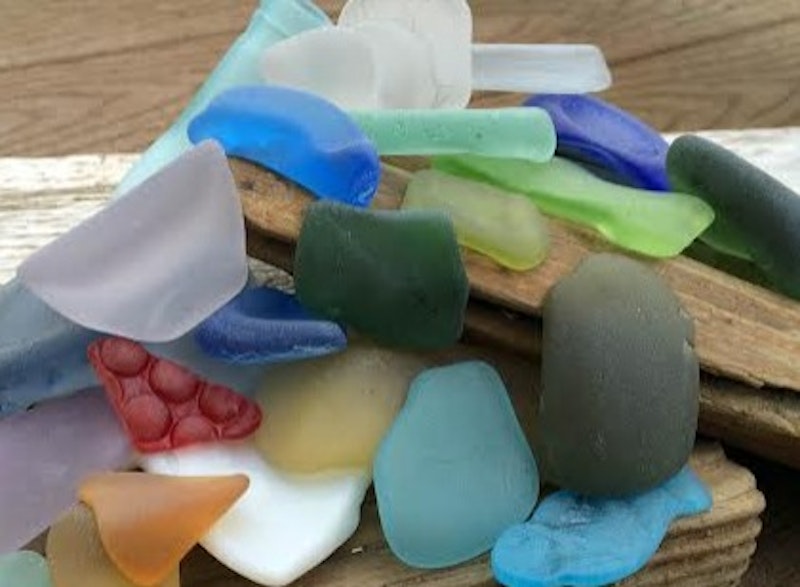 This year I attended the North American Sea Glass Association (NASGA) Festival in Cape May, NJ. An avid collector, I signed up to display some of my findings at the collectors’ booth. My 12-year-old daughter ended up manning it while I helped out a jewelry vendor. It was really fun to see private collections of glass from around the world, and my favorite part of the weekend (though the venue was too small for the unprecedented crowds that showed up) was being a part of the “Shard of the Year” contest to choose the best sea glass finds in various categories. Two of our finds (including a pink sea monster found by my daughter) won Honorable Mentions and out of 800 entries, we were pretty proud of that.

There are two controversial issues that come up often within the sea glass community. One is tumbling, or the practice of taking broken glass and placing it into a rock tumbler to tumble it until smooth. Tumbling changes the appearance of the glass: it takes on a smooth, frosty sheen that’s different from what you find in a piece naturally tumbled by ocean waves. It’s controversial because there are many vendors who sell “sea glass” that is really tumbled glass. Tumbled glass is not allowed into the NASGA show. “Pure Sea Glass,” a term coined by Richard Lamotte, the author of the book of the same name, and the go-to reference book for collectors, is far and away the preferred collectible because it’s natural and as-found on beaches.

The problem with tumbled glass is that you don’t necessarily know where it came from. Someone could be sitting in a garage smashing Bud Ice cobalt blue bottles, tumbling the shards and selling it as sea glass. In our hobby, the “provenance” of a piece is important: meaning where it’s found and the search to discover its source. Was it a piece of 1920s carnival glass? The corner of an 18th century shipwreck bottle? A stopper from a 19th century medicine bottle? Part of the joy of finding sea glass is researching its history. This brings me to the second issue.

“Seeding” sea glass means taking broken glass and throwing it into the ocean or other body of water such as a lake or bay. I read a comment on Instagram once where an alleged sea glass enthusiast would break old bottles on the side of the boat and throw them into the water while boating to “create sea glass for future sea glass hunters.” No. This is controversial for a number of reasons, the main one being safety. Children play on beaches, obviously, so purposefully throwing broken glass onto them is dangerous. It is littering, and illegal. It also puts a piece of glass on a beach that wouldn’t have otherwise been there, making it impossible for whoever finds it to attribute it to a source if they research it. It’s glass out of context. If you hunt for sea glass in an area where there is no public beach, like I do, throwing an unfinished piece back into the water is fine, since it’s going right back where it came from to simply let the waves tumble it some more. Marbles are my favorite things to find, so I never throw them back no matter how unfinished they are; they’re still vintage and such fun to discover.

I used to have a rock tumbler which I since gave away. I did not smash blue Bud Ice bottles and tumble them. I used to tumble pieces that were primarily rare colors I found on the beach that were not 100 percent ready (“cooked” or “frosted” as some sea glass hunters say). See the photo above for an example. Although I don't tumble anymore, when I did I kept tumbled glass separate from pure sea glass so that it could be used for craft projects or given to artists I know who use it for projects. If I sold the glass (I once had an etsy shop but was too busy to keep it up), I called it “tumbled beach glass” (because mine comes from the bay versus the sea). The important thing is to call things what they are.