Living wills are important but difficult. 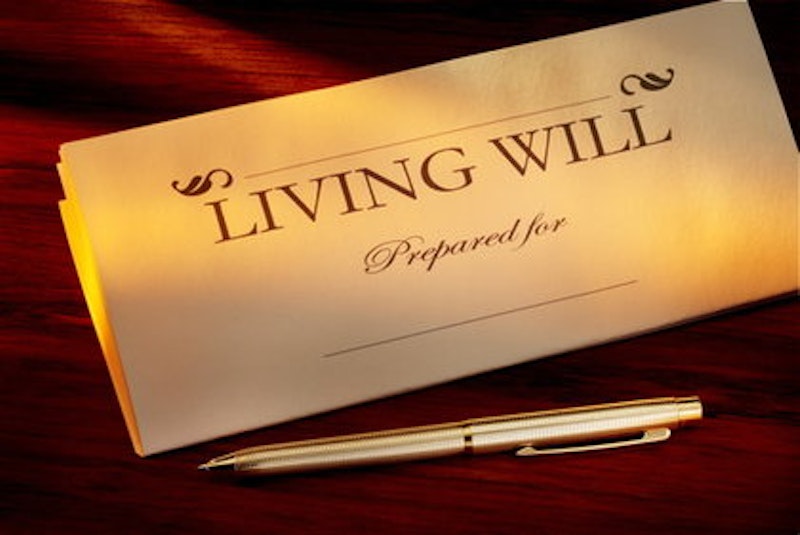 Last week I found myself at my attorney’s office writing a living will. It’s not like I have millions in assets to give away, but I feel like I’m approaching the “autumn of my life” and I should probably have things in order. When walking in, I assumed we’d be discussing the future of my real estate, meager belongings and what music I want played at my funeral.

Several minutes into the meeting, I realized my attorney was not really all that interested in Aunt Ginnie’s diamond ring that I’d inherited. A living will apparently had more to do with end of life questions than who will get what. It’s a legal advance directive that will, one hopes, assure that we’re treated as we want at the end of our lives.

“What about life support?” he said.

“What about it?” I said. He explained that I must be specific about my end of life choices.

Usually a living will states that the maker does not want any procedures that will artificially prolong life, including intravenous feeding, hydration, or medication other than pain relievers. Sometimes, a living will may dictate the opposite, that the maker wants his or her physician to take all measures possible to prolong life. This is all, under assumption that the person is unable to communicate and in an irreversible state.

“This is really creepy,” I said. “It’s not what I thought we would be talking about today.”

“Yes, it can be uncomfortable but you need to put this together,” my attorney responded, trying to soothe me.

I left his office in a daze. My fear at this open discussion of death reflects widespread difficulty accepting mortality in our society. All humans’ lives end in death yet most of us don’t think much about it unless our health is poor or someone we love is terminally ill or has died. If we did think frequently about end of life, we’d be viewed as depressed. Some Buddhists often meditate on their own deaths, supposedly to help ease the fear and anxiety that the thoughts associated with it create. For those who believe in an afterlife with continued awareness, perhaps there is less fear in being non-existent in this world.

But for people who believe that immortality is found in memory or non-conscious merger with the universe, there is no presence at one's own funeral, no looking down from heaven smiling on those we love.

It’s not easy for those of us who are older to accept the inevitable. Some of us live in denial. Some are afraid. Some are angry. Some grieve for ourselves and for the people we will lose when we’re dead. Some achieve a state of peace about death. Some never do. But most Americans, statistically, are in the last chapter of life.