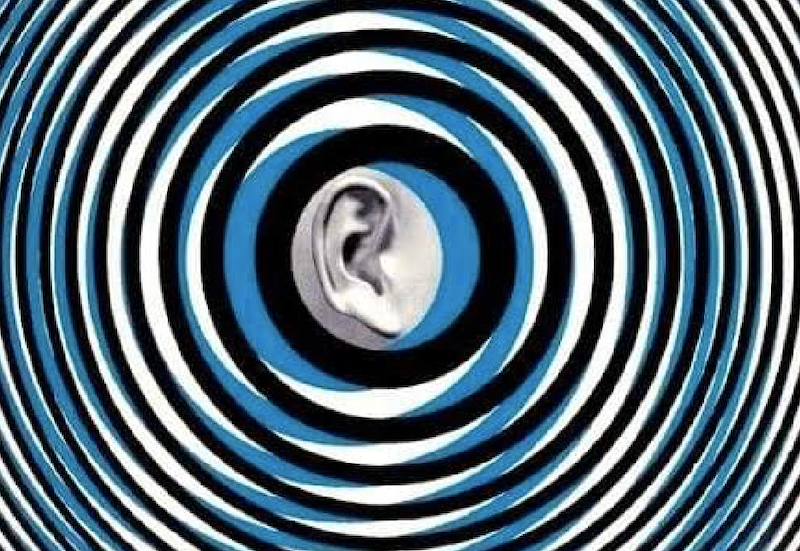 I want a little bit of silence. Stop it! Just stop everything, shut it down, turn if off! Can there be any release from the roar, and hum of this noisy world? The commotion of humanity's manmade machinery, going all at once. What's the ruckus about? This racket falls on deaf ears, if you listen too closely. The incessant babble of millions of mouths chewing the fat. The swoosh and shush irritates the senses and muddles minds. The ceaseless din of horns, beeps, dings, dongs, bells, alarms, buzzers, sirens, and whistles continues, wreaking havoc in its constant electric buzz. The clamor of clangs, bangs, slaps, knocks, taps, and beats continues on the collective skulls of cracked heads.

The quietest place on earth is inside the research lab Orfield Laboratories, located in Minneapolis. Acoustical consultants for multi-sensory independent design research, a branch of Microsoft. Inside, there's a space called the Anechoic chamber where no sound exists. It resembles a state-of-the-art high-tech recording studio. There’s also the world's first digital recording studio in house. The biggest bunch of sound nerds on the planet The walls, floor, and ceilings of this room have a three-foot layer of soundproof fiberglass foam baffles that cancel every decibel and 99.9 percent of echo. Behind that, additional heavy steel and foot-thick solid concrete double insulates the structure.

Inside this chamber, one must sit perfectly still, for every movement is a thunderous explosion of sound. You can hear only your own heart, every breath, stomach gurgle and swallow amplified, the blood pumping in your head magnified to annoying levels. According to the Guinness Book of Records, only one test subject lasted 45 minutes before the silence screaming in their head drove them out of the quiet room. It turns out the more quietude you have, the more noise you’ll hear, including auditory hallucinations. Occupying the anechoic chamber for longer than 15 minutes can cause extreme symptoms, from claustrophobia and nausea to panic attacks. You’ll start hearing things. A renowned violinist once tried it and hammered on the door after a few minutes, begging to get out because he was so disturbed by the lack of sound and the strange music in his head.

Libraries, churches, and funeral parlors are some of the quietest public places where people usually whisper and speak in hushed tones. In outer space no one can hear you scream. The absence envelops, devouring all in a vacuum, an endless void of quietus, like a tomb. Where sound has no place to go. The rush of air moving tones to the inner ear drums modulates frequencies of silence. You must be hearing things. Like some call of the wild, there’s no relent from nature. Seeking solace in the natural world is preferable to manmade sound. Nature sings its song of life. Birds chirp, wind whistles and rustles grass, amongst the dry leaves, insects buzz by, listen closely and hear the sound of sound itself. Rain drops hit a hot tin roof and sizzle, steam, and evaporate. The nearby river rushes through the landscape. Barnyard critters, moo, cluck, oink, whinny, bah, bark, and meow in life’s symphony. It’s a calmer noise than the city soundscape. All that hustle-bustle grates on frayed nerves. Creates anxiety and tension. Who needs the stress? Unplug. Sit back. Feel the calm take over. A meditation of quietude. The singsong of some heavenly paradise on earth. There is no news that’s important. Nowhere is the destination. No war. No hate. No poverty. No nothing. Only that soundtrack playing in the head. For a bright moment from a brief note, freedom rules. Floating away, drifting in a wavelength all around. Then, buzz! The alarm goes off. Wake up! Welcome back to reality.