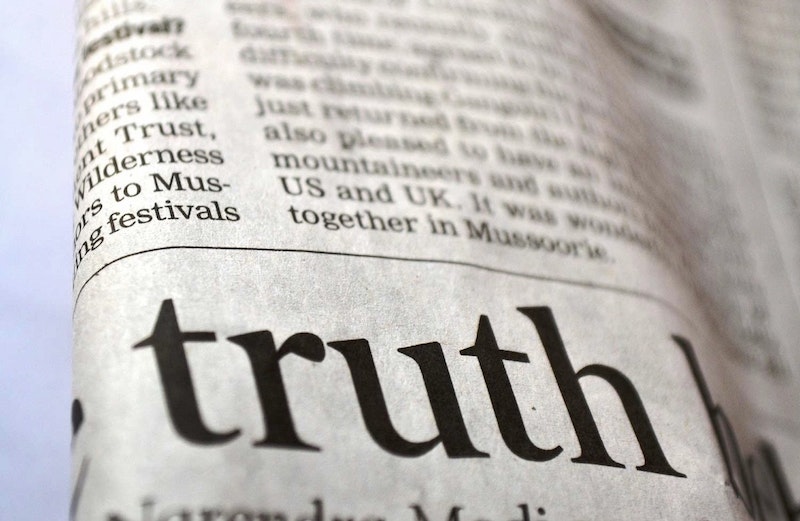 You may be familiar with the idea that "We live in an era in which objective truth is under assault." In "the post-truth era," people won't accept the objective truth: they accept what's true for them, true in their own little group, true in their sub-culture. They accept what's emotionally satisfying to believe. Right-wing science denialists won't accept the objective truth, but neither will left-wing nihilists. Everyone purports to defend the objective truth and says of the truths purveyed by their opponents that they’re stunted truths, merely subjective, or true only for people like them. There’s our pure truth, unsullied by interpretation, and then there are defective truths, relative truths, and so on. You’re entitled to your own opinions, it’s sometimes said, for those are your subjective truths. But you’re not entitled to your own facts, which are objectively true no matter what anyone says.

I’m a truth fan, a truth-monger. But the alleged distinction between objective and subjective or relative truth is completely confused. And deploying this distinction against your opponents is worse than useless, amounting to mere table-pounding. When you insist that “vaccines work” is the objective truth, you haven't given any reason to accept it. “It’s objectively true that vaccines work” means exactly the same as “vaccines work.” You've merely repeated yourself. All truths are equally objective in the sense of being independent of any particular person's opinion, and nothing in the universe corresponds to pseudo-concepts like "true for me" or "true in sub-culture x." Talking this way only confuses matters.

Let's consider a candidate for subjective truth: for example, "I feel happy right now." That's a truth about my subjective state. But if it's true, then if you say, "Crispy is happy now," what you say is true. Anyone who denies it is, by hypothesis, wrong. Now it might also be false when I say it. I might be concealing my pain. I might be misapprehending my own emotions. But if it's false, it's false no matter who asserts it, including me. That is, there are truths about subjective states, but they’re as objective as any other truths. But that’s not a kind of truth; that I'm happy right now is true, if it's true, in just the same way that, to just the same extent that, to just the same people (everybody), as the claim that the vaccines are effective or climate change is real.

You believing x really hard with all your heart does not make x subjectively true, because there are no merely subjective truths. That God exists "for me": I don't think that says anything but that I believe it. That God exists "for you": I just hear that as saying that God doesn’t exist. However, none of this has any bearing on whether God actually exists or not, and it has no bearing on whether the sentence “God exists” is true. "Subjective truths," that is, are objectively true, or else they're just false, however you feel. How sincere you are doesn't bear on the truth of x whatsoever. All of us together believing x does not make x true, unless x is the claim that “there’s something we all believe.” It doesn't make x culturally true or true for us. You can see that because, obviously, what we all believe together could be false. We might find that out at some point.

"True for me (or us)" is a raw conceptual flub. And it’s easily avoided. What “Sally believes that x” means is that Sally takes x to be true. If x is indeed true, then she's right. If not, not. In other words, saying that it's true for her, insofar as it means anything, means only and precisely that she believes x. I'd suggest putting it that way, because the idea that it's becoming truer and truer as she believes it harder and harder isn't going to end sensibly. “X is true for me” and “not-x is true for you”: here, a situation in which people with a completely ordinary disagreement in which at most one of them is right is portrayed as a situation in which reality itself is melting down. Every false belief, on this picture, lands you in a different reality, where your subjective or merely cultural truths reside. And the false belief, on this picture, is true in that reality: true for you. Sometimes people talk about “my reality” and “yours.” That ought to end the matter. We're allegedly arguing from different realities about different realities. We're both right "subjectively." Time to give up the fight.

Appending the adjective “objective” to “truth” hints that there are other sorts of truths, the non-objective kinds, the personal or cultural kinds. This hint will land you in a heap of bewildering contradictions. All truths, we might say, are perfectly objective, which is why it's misleading to describe any truth as “objective”; there are no other varieties of truth. By pounding on the objectivity of your own truths and the subjectivity of those of your opponents, you've pounded the concept of truth into a powder and scattered it to the wind. There’s not a super-duper kind of truths, superior to all the defective kinds of truth.

I'm glad that you think I'm entitled to my opinions. My opinion is that the claim you just made about vaccines, or whatever it may be, is false. Now, are you willing to give reasons, or are you just going to pound the table some more?