George Orwell and His Dumb Mortar 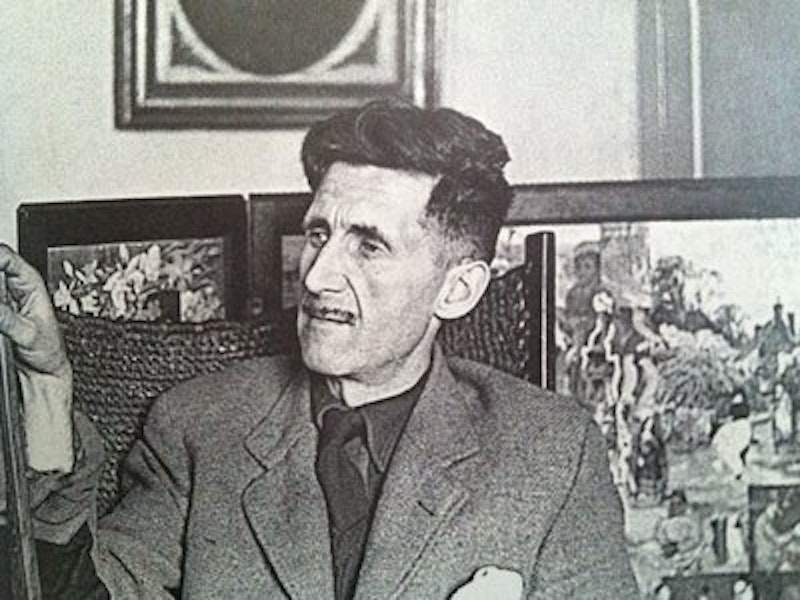 George Orwell caused one soldier to lose his front teeth and another to pass a full day unconscious. Perhaps “soldier” isn’t the right term. They were volunteers in the Home Guard, a militia made up of British subjects who were too old or infirm to be useful in the army. Orwell was their sergeant. Just their luck to have an intellectual in charge. There was a mortar that had to be fired, and their sergeant loaded the wrong sort of bomb.

This incident is described in light-hearted fashion on page 201 of Orwell: Wintry Conscience of a Generation, a decent short biography of everybody’s flinty voice of truth. On page 200 there’s the indignation Orwell felt at listening to an aged general addressing the men. “Orwell was savage about the appalling leaders who marched to imaginary battle under the Old School Tie,” writes biographer Jeffrey Meyers. Then a quote from Orwell gives us the low-down about the general: “The usual senile imbecile, actually decrepit, made one of the most uninspiring speeches I ever heard.” On the next page, we have the business about the mortar. The damage done to the men is tacked on at the end, as a sort of punchline.

I suppose the general might’ve done some damage in his time. Then again, maybe not. The general, whoever he was, struck Orwell as a useless old duffer, but the fellow hadn’t always been old. And maybe he was bad at giving speeches but good enough at discipline and administration. Perhaps mortars weren’t as likely to be loaded with the wrong sort of bomb when he was in command. Meanwhile, of course, he was lamentable at formulating original thoughts. He might have no idea if the cause he fought for was good or bad; like a dope, he’d just assume it was. But that doesn’t mean he was operationally incompetent, whereas the case on Orwell seems clear.

Orwell, of course, had an idea and fit the general into that idea. Britain was fighting Hitler because the nation’s elite had screwed up so badly. The privileged fools had to be moved aside for the people to take over. The general was a specimen of the incompetence that ate through Britain’s established order. Orwell knew this because the general was a general, and because he gave a bad speech and was old. Orwell’s supposition might’ve been right, but only by accident. We don’t know that the general did much harm to his soldiers.

But Orwell… “Sergeant Orwell was clearly a greater danger to his men than to the invisible enemy,” chortles his biographer. One of Orwell’s best-known observations is that W.H. Auden, that valiant armchair warrior for the proletariat, wrote about murder as if he had no clue that it was more than a word. Meyers seems the same way about danger. Nor does it seem Orwell cared that much about the mortar accident, since there’s no mention of it (that I’ve seen) in his essays, fiction or journalism.

None of this means that he was wrong about totalitarianism or the battle to keep the individual consciousness alive. Every time he wrote a sentence (all right, most times) Orwell committed a triumph of intelligence and honesty over the need to show off for oneself. His prose is some of the best we have because it shows what can be done through the simple attempt to spot truth, nail it down, and communicate it. His intelligence and liveliness and ability to care all made a difference. But Orwell added to these his determination to be ethical, and that decision shows up in the particular beauty of his writing. He didn’t always manage to see the truth; if so, he’d have written something about his mortar. But he did better than most people.

To tackle the subject from the other side, I admit there’s no guarantee that an intellectual is a la-dee-dah screw-up. A man at the hardware store told me that he had an MA in Lit and that he’d worked at places where most of the staff had graduate degrees. A professor interviewed by Colbert had a book about his life-long experiences putting together kitchens and laying pipes. These people do exist. But then there’s Orwell and the wrong mortar. An intellectual who lives his truth on the page can still flake out in real life. Under the right circumstances, even a senile general may be less of a menace.