Trumpism as a Rural Identity Movement

It has something in common with black nationalism and gay pride. 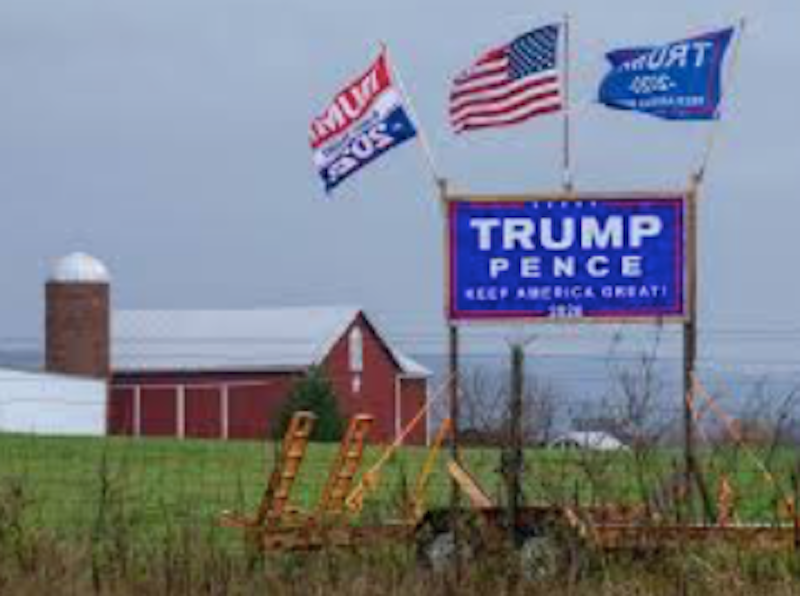 I don't think that America has ever seen a political movement like Trumpism, which I experience as dividing us, almost neatly, by the population density of the places we live. Trump achieved an unprecedented mobilization of rural voters. Here in Adams County, PA, and all over rural America, people in the run-up to the election festooned their trucks with Trump flags or replaced the American flag on their flagpoles with "Trump: No More Bullshit." They—and by “they” I mean typical rural people—appeared in caravans moving around the square in Gettysburg, or rolling up and down Rt. 15, or invading your suburbs. People had giant Trump inflatables in their yards, or papered their houses with signage. I've lived in various bits of rural America for a long time, and I've never seen anything like it. Mitt Romney and Bob Dole didn't get that kind of play.

Very little Trump stuff has come down since the election, and Trumpism is the first national political movement to crystallize rural identity, or even redneck pride, in a way that country music has relentlessly done for decades. In it, rural people came to a sort of self-consciousness as a political force; they learned to say "we." One might draw an analogy between this and the Marcus Garvey movement, or some kinds of early feminism, or Act Up in the early-1990s: a "nationalist" movement in which people learn to see themselves as having a collective identity that is oppressed and devalued.

They’re right about that, and the sneering condescension with which many, for example in academia, have regarded country people is hard for me not to notice, as someone who commutes between the two cultures.

A classic country music theme is the rural or small-town kid, trapped by narrowness and boredom, who needs to get out and see the big city. (Another classic theme is finding the city harsh, incomprehensible, and inhuman, and returning home.) I went in the opposite direction, growing up in NW D.C. but yearning for the countryside. Since I reached the point of making my own decisions, I've lived as rurally as reasonably possible, in Batesville VA, Cottondale AL, Whiteford MD, and Seven Valleys PA, among others. Overall, life is less of a hassle in places with fewer people; there are no traffic jams, for one thing. And when I return from the city to the countryside, my whole body relaxes; I stop hating the world.

But in these decades I’ve seen rural America sag severely: small manufacturers disappearing; farms foreclosed or folded into much bigger operations; small-town downtowns shuttered; kids living the song and leaving as soon as they can; schools and churches becoming abandoned buildings; waves of meth and opiates. For decades, there seemed to be an effortless but bizarre assumption, even in the sociological research into rural pathologies, that everyone wanted to live in a city and eventually would, more or less, as the economy somehow transformed from making concrete things to providing abstract services. Rural Americans were living in a way that was over, and the question was how to assimilate them into the globalized information economy of the 21st century, or whatever Al Gore was on about.

But what are y'all going to do, abandon 93 percent of the country and eat information? Country people are often derided for ignorance, but they often deride you for living in a realm of delusion. There are some problems with Barack-Obama-style technocracy I’d like to point out. Rural people have been approached, at best, pretty much the way Daniel Patrick Moynihan and Bill Clinton approached black people: How can we address your pathologies? Maybe if y'all went to college...

Trumpism appears out here as a rural pride movement. Such a movement strikes me as justified, necessary in some form: a culture, a way or ways of life, and the connection of people with the physical landscape of America have been endangered, devalued, sneered at, and devastated. Country and small-town America has similar reasons as black America or trans America to unite and resist. I'm surprised that it didn't happen before.

But I wish it hadn't been Trump. I wish the sense of rural pride that has arisen wasn't tainted with white pride, that there could be a rural nationalism that wasn't connected in any way to white nationalism, that people out here weren't falling for lies. Rural America needed an avatar, but that New York developer with his rattletrap demagoguery and his relentless narcissism was both an unlikely and extremely unfortunate selection. But personae as compelling and mercurial and bold as Trump's, and as willing to smash the stultifying rhetorical conventions of American technocracy, are rare.

One wonders whether the sense of rural identity could’ve arisen at all without a big dose of these dark sides, and one bad thing about the ironic embodiment of rural identity in Trump is that it tends to confirm everything that Harvard profs and Atlantic staff writers think about us: that we're ignorant, easily manipulated, evil, and stupid. On the other hand, everyone is sort of paying attention now; everyone is sort of realizing that country people have them surrounded, that driving in any direction from any big city in America gets you to Trump country really quick.

They're talking again about fixing rural people, or beaming more diabolically effective propaganda into our homes to relieve us of our ignorance, or educating children out of their parents' values, all of which is just going to piss people off and exacerbate the divide. But what I dream of seeing is a rural politics and a representation of rural people in the corridors of power that proceeds by some sort of expansion rather than various forms of exclusion, that demands recognition and concrete steps to help rural communities but does not configure around racial identities.

I admit that seems unlikely, but even with all the Trump paraphernalia weathering on the trucks and in the yards, there are people here in rural America, and there are many who understood the attraction of the Trump movement perfectly well but were uncomfortable with the racial content, or clear-eyed about the idiocy of Trump's response to COVID. He lost some votes this time around, though the supporters were even more united and vociferous.

I don't know whether the rural identity movement rallies around Trump '24, mutates into something less toxic, or peters out again into resentful silence. But I see why it was necessary.