Too Much Monkey Business

Is it possible we never saw the end coming? 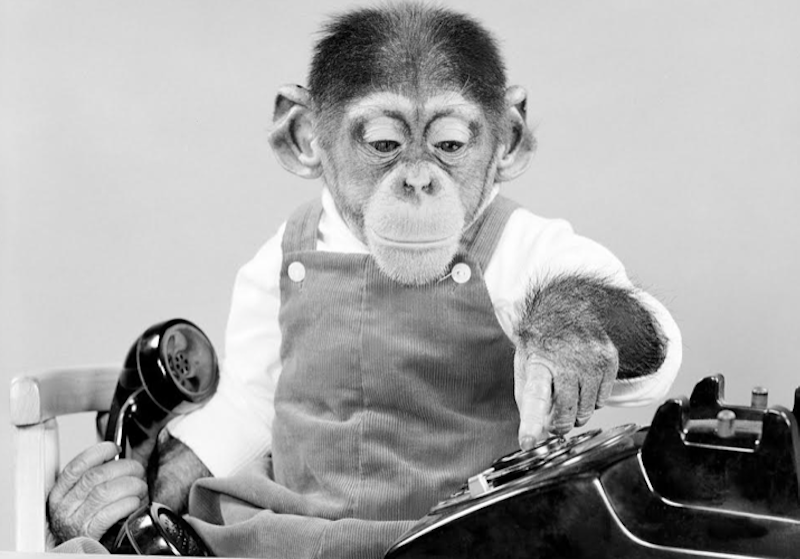 Who’s first? What did they do when they got there and where did they go? Why the hell did they do it in the first place? How come nobody knows a damn thing? Questions to ponder about a storied formula that covers all the bases on Journalism 101, or how to write a true tall tale. Not an Abbot and Costello routine. No easy question to ponder the big bellybutton questions. Who are you?  Why are we here? No single silly question for the ages. No reply. No answer.

The mystery of life, death and simply living while still alive. Those shiny monoliths appearing in remote locations around the world. Vaguely reminiscent of 2001: A Space Odyssey. The opening scene where pissed off primates jibber jabber, jump and lurch, howling while banging large bones against a black monolith. The feeling it evokes is similar to our present-day truth. The oddity of outer space inner vision. Someone’s idea of conceptual sculpture with an obscure message or clues to alien acts. The obscure reference of our inability to grasp existence. Excursions in to unknown territory. A place where nothing’s familiar yet everything appears completely normal.

A silly throwaway song from over three decades ago with gibberish lyrics is playing in my ears. Recorded by a band whose name is an abbreviation for rapid eye movement. The chorus, “It’s the end of the world as we know it...“ plays continuously in my head. We’re not fine and Lenny Bruce is not afraid most likely because he’s dead. I routinely contemplate my own demise in the middle of this pandemic.

A zoological cage full of hopes and dreams. Looking for answers in the stars or under the microscopic scrutiny of prying eyes. To watch a chamber full of chimps argue law while flinging shit across the filibustered aisle of no return. Monkey see/monkey do keeps that money flowing. Monkeyshines remind me of that old joke. You know the one. The one with the devil in it. That one about the moon and monkey astronauts in orbit. How many monkeys does it take to change a lightbulb? Listen bub, nobody makes a monkey out of me. I’m perfectly capable of monkeying around on my own.

Is it possible we never saw the end coming? It could be the prophecy we missed on the way to now. A tour de force of nature. Tarzan the apeman dancing a la Fred Astaire, singing Hollywood Gene Kelly in the rain. Ugly American in Paris. Holding hands across America singing the Coca-Cola theme song. Prehistoric cousins of Darwin’s theory of relativity in perfect harmony. Where George Washington and Abe Lincoln are meaningless figureheads printed on cheap paper of the failed national debt. The curse of the Kennedy’s weekly variety reality show. The indignities of old age. Sour wine of youthful piss and vinegar. A wink to old-fashioned values. A teenage flea bit monkey... all my friends are junkies. Flunkies for the big chief. A Congress of fools.

The crime of the century. Lancelot Link and Red Rose Tea commercials. A barrelful of monkeys could dismantle the machines. There are no overweight skeletons. Hey, hey we’re the monkeys. Thirty feet of intestinal fortitude and 30 teeth in your hollowed head. Thirty pieces of silver. Or was it gold? Everything is easy with the mouth. Lips flapping away, unimportant things to say about nothing. This is how we got here in the first place. Allowing others to do the bidding. Relinquish control of the senses.

A trick that our hairy cousins taught us. Sock monkeys with Curious George asking for more candy. King Kong sea monkeys high atop the Empire State Building. Flying monkeys got nothing on the gorilla’s way to the path of civilization. Metaphors for modern civilization. Monkeys on a mission, marching forward to the American way. Looking back to see how far we’ve gone. Many miles still to go.