Totalitarian Tchotchkes and Other Collectibles

The 20th century’s dictatorships survive in the political fringes and the business of collectibles. 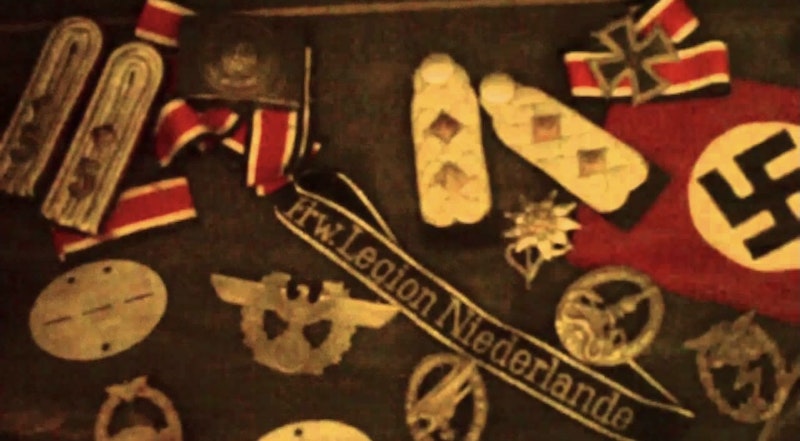 Nearly five years ago, I meditated on my need for the superfluous while preparing to move from Bay Ridge in Brooklyn to Antrim, New Hampshire. For instance, I remember coming across a mail-order catalog that had arrived unbidden from Sovietski Collection, offering all manner of Russian “memorabilia”: windup gramophones, skeleton pocket watches (their faces and covers are crystal, so one may watch their works as they spin), arithometers (an early and wholly mechanical type of adding machine) and the usual array of mechanical toys, telescopes, compasses, and so forth, as well as MiG aircraft ejection seats. My taste for the recherché does not extend that far.

What intrigued me most was what I considered “totalitarian tchotchkes”—the mass-produced aluminum busts of Lenin and Stalin, from four to 10 inches in height; colonels’ uniforms encrusted with gold braid and flamboyant insignia of rank; steel coats of arms, pried off first-class railroad cars; gym bags, boxer shorts, tea glass holders, liquor flasks, cutlery, watches, stuffed animals, daggers, and flags, all bearing the hammer and sickle; pocket watches enameled with the image of the cruiser Aurora, whose forecastle gun fired the shot signaling the charge on the Winter Palace; and the infinity of medals, decorations, badges, and enameled commemorative pins that seem the natural bumpf of 20th century dictatorship as one finds the same things from Nazi Germany, Fascist Italy and their puppet states.

The American utopian writer Edward Bellamy unwittingly foresaw this element of the all-powerful state in his novel Looking Backward, where service in the national industrial army is rewarded with numerous marks of rank and badges. It makes sense. Under liberal capitalism one’s effort is supposed to bring its own rewards. When the state is the sole font of individual distinction, one yearns for the slightest mark of official recognition. More disconcerting than the objects themselves was the gushing sales copy for this detritus—the decorations for an “Honorable Worker of the KGB,” for the Ministry of Interior’s “Excellent Propagandist,” for an “Outstanding Border Guard.”

Most vendors of Nazi and fascist tchotchkes carefully explain in their catalogs that they don’t support totalitarian ideologies and their wares are merely historical artifacts. To my surprise, the Sovietski Collection catalog said nothing of the kind. Perhaps they thought these things were kind of cool.

Generally speaking, the 20th century’s dictatorships survive in the political fringes and the business of collectibles. The traffic in original and reproduction Nazi stuff, from uniforms to lapel pins, from mail order to auction to gun show, is elaborately documented. Several American rightist Internet sites provide links to a store in Benito Mussolini’s native town of Predappio. It offers ties, pins, paperweights, hats, t-shirts, flags, and portrait busts of Il Duce, some 75 years after the Milanese strung up his corpse by its boots in the city square. Some Internet sites forbid the sale of Nazi memorabilia, even to collectors (no one seems to bar trafficking in the communist stuff), restrictions that reflect the laws of the European Community, particularly the French Republic, which emphatically prohibits any manifestation of Nazism, whether political or commercial, a law that post-dates the Vichy regime.

The impulse to accumulate is instinctual. Even animals collect things. Magpies adorn their nests with bright and gaudy objects. The brown rat, Rattus norvegicus, hoards small gadgets and coins: Joseph Mitchell, in one of the essays collected in The Bottom of the Harbor, describes rats’ nests found on post-demolition construction sites containing such artifacts as “an empty lipstick tube, a religious medal, a skate key, a celluloid teething ring, a belt buckle, a shoehorn, a penny, a dime, and three quarters.” James Roy King, in Remaking the World, argues that the urge to collect is as firmly rooted as the erotic drive, perhaps stemming from “some primitive determination to squirrel away supplies for bad times and amass trophies indicative of one’s valor.”

Others might argue that the objects have a certain numinous quality. In Michael Flanagan’s novel, Stations, the narrator, surveying a junk sale, ruminates, “I suppose it’s like archaeology, to go digging around through books and papers and other people’s things.” He goes on: “The shards of life. You handle these used objects and you realize there’s no one to shelter them anymore, objects that might have been sacred to somebody once.”

I think of this when considering a handful of worn Roman bronze coins, part of an army payroll buried in the North African desert to keep it from invaders’ hands and lost for nearly 2000 years, recovered long after the men for whom they were meant and the institution that had authorized their issue had vanished with yesterday’s sunset. The odds are on objects.

Collecting requires discrimination. A collector’s pleasure is enhanced by knowledge of the objects that he collects; he practices something of the artist’s restraint in rejecting things that will detract from his collection’s overall effect. Thus he imposes order by selection upon the chaos that is the universe of things.

Mere accumulation is mindless. The rats’ nest contained merely a pile of shiny stuff that somehow appealed to the animals that lived there. People do this, too: the Collyer brothers, living in their Harlem brownstone with more than 100 tons of junk, are only the most famous.

Such accumulations are merely assemblies of objects without plan, art, or elegance. Still, accumulation and collection may be uncomfortably close in effect, if not in meaning. When we moved to our house in Antrim, the moving men and women came in, hauling boxes through our back door. After my initial elation, I began wondering if the Sorcerer’s Apprentice had felt like this. Worse, I watched my wife deal gallantly with her mixture of emotion as she watched our living room come to resemble the closing shots of Citizen Kane or Raiders of the Lost Ark.

So I had to exercise my discrimination once more by discarding most of my collections for want of space. I felt no sorrow. The move forced me to consider why I kept these things. And in most cases, the reasons had faded away. In some, I had no reason beyond a long-ago moment’s impulse.

Most of what I’d collected stemmed from emotional responses to things seen in childhood. Like Miniver Cheevy, I felt born too late, sighed for what was not, and cursed the commonplace. I had nostalgia for things I hadn’t known, developed through hours of watching silent films that now in memory consist of Charlie Chaplin, Buster Keaton, and steam locomotives. Being a kid, I loved watching trains and planes and things that go. Yet I felt happier with steam locomotives and biplanes than diesels and jets, and found the frock coats and silk hats of the years before the Great War far more elegant than the grownups’ clothing of my time.

I identified with my father’s irritation when he came home from work fuming about the Ford Motor Company’s decision to discontinue the full line of parts for the Model T. This must’ve been some time between 1965 and 1967. The last Model T had rolled out of River Rouge in 1927. Forty years is a long time to carry a complete line of parts, efrom nuts and bolts through fenders and grilles, for an automobile no longer in production. My father had wanted to build a Model T new, ordering the parts and assembling them over time in the barn. To me, this seemed like a romantic rejection of modernity. In fact, my father’s impulse was much simpler: his first car, back in the late-1940s, had been a Model T and he’d wanted to build one just for the sheer, joyous, unadulterated hell of it.

Like most kids, I collected things. Well before my 10th birthday, I was fascinated by the Mexican Revolution of 1910-1920 and its personalities: the old dictator Porfirio Diaz, the idealist Francisco Madero and the real revolutionaries, Carranza, Villa, and Zapata. The same held true for China of the Republican era, say 1910 to 1930, with the nation torn by warlords, internecine strife, foreign protectorates, and the steady infiltration of the Japanese Empire into Manchuria. These eras were long gone, and I might not have enjoyed living through them. But I could collect the postage stamps and paper money of the ephemeral Mexican and Chinese regimes, which proved far more enduring than the governments that authorized their issue.

Such objects are madeleines, like the teacake whose scent, flavor, and texture evoked an unfolding lifetime of memories for Marcel Proust. I’m less subtle than he, my associations more crude. The beautifully lithographed and intrinsically worthless paper money of the State of Chihuahua, Mexico, issued by authority of General Francisco “Pancho” Villa and forced on merchants at gunpoint to legalize the Villistas’ seizures of guns, ammunition, food, clothing, and other supplies such as entire railroad trains, locomotives and all, intensely evokes the Mexican Revolution in all its flamboyance, savagery, courage, and valor as well as the self-delusion that usually lies at the root of political involvement. So, too, the Chinese paper money, nearly all of it printed by the American Bank Note Company in New York, issued in dollars, yuan, or customs gold units, with its innumerable images of dragons, biplanes, steamships, railroads, Sun Yat-Sen, and Chiang Kai-Shek, of bemedaled warlords, splendid temples, and gleaming skyscrapers, recreates its world of political, economic, and military instability.

The same motive drove my stamp collections. I had a childhood fantasy of equaling the great stamp collector Count Ferrari. Armed with the foresight, imagination, and energy to inherit the equivalent of $60 million in the mid-19th century, Ferrari began collecting stamps when he was 13, eventually spending roughly $10,000 a week on his collection. He may have been the last philatelist to have one of everything, including the unique British Guiana one-penny magenta, then as now the most valuable stamp in the world.  There are other unique stamps: such things happened in the 19th century, particularly before stamp collecting became widespread, but none have enjoyed the renown of the one-penny magenta.

Unlike Ferrari, I outgrew the hobby, stopped actively collecting some 30 years ago, and simply toted the dozen or so dark-blue Scott’s International Albums with me from apartment to apartment, never opening them. Now, this seemed perverse. Toys are meant to be played with, not hoarded in some closet or old cigar box. So the old coins, paper money, and postage stamps have largely gone to dealers or charities.

Collecting is one means of bringing order out of chaos, the universal impulse to imitate the Creator on His first day of creation. It may be a kind of prayer. Even my father’s dream of building a Model T in the barn may reflect this. After all, the car itself would’ve been orderly enough, I think. Yet its hundreds of parts, once laid out on the barn floor, would’ve suggested chaos to my mother.