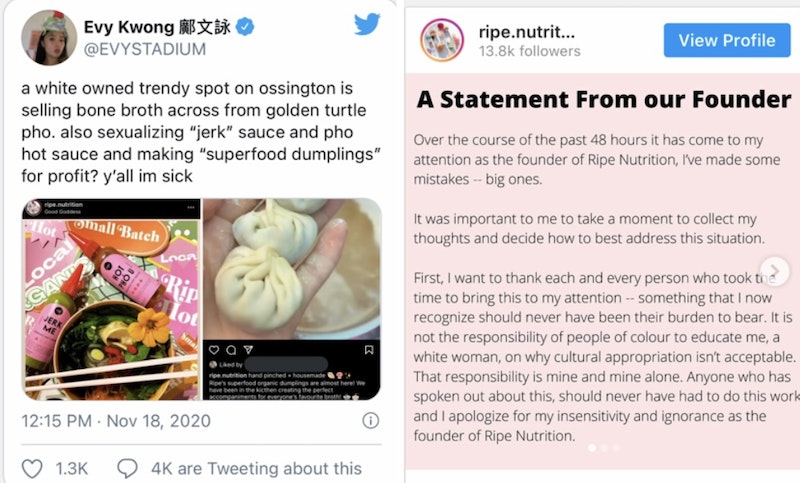 We live in a time when those who've unintentionally offended others try to salvage their livelihoods by making an apology using boilerplate language taken from some PR manual. After their sudden epiphany, they all talk about how happy they are for the education, sounding like they're reading cue cards.

The last depressing mea culpa I've read started out: "In the past 48 hours it has come to my attention as the owner of Ripe Nutrition, I've made some mistakes—big ones." It gets worse: "First I want to take the time to thank each and every person who took the time to bring this to my attention—something that I now recognize should never have been their burden to bear." And what was the heavy load this penitent (Alexandra Baird, owner of a firm called Ripe Nutrition) imposed on these helpful and generous people? She opened up a pop-up "broth bar" (Asian-style bone broth is a newish health food trend) in Toronto in an athletic apparel shop called PERMISSION. But Baird, who's white, forgot to get permission to sell Asian food, so she's been tried and convicted of the crime of "cultural appropriation."

Let's hope that the culture cops don't find out about the $22 cocktail containing the new elixir, bone broth, at Pistola, an Italian restaurant in Los Angeles. These people have deemed it acceptable to experiment with the fruits of other cultures within the confines of your own home, but profiting off of other cultures sets them off, for some reason. Probably it's envy that they're not doing it. People are now so afraid of self-appointed gatekeepers that they begin their apologies by thanking their accusers for trying to get them cancelled. That's how it works in our updated version of the struggle sessions that the Red Guard once used to enforce conformity during China's Cultural Revolution 50 years ago.

Alexandra Baird has been identified as Canada's latest "running dog of capitalism," but we're civilized in North America, so she won't be dragged down to the town square to be screamed at and beaten by her own relatives and neighbors. Baird just has to acknowledge all the "hurt" she's caused, and understand that her business can no longer continue. The modern progressive concept of "justice" is Manichean—no quarter is given to allow for redemption.

Toronto Star editor Evy Kwong became the leader of the posse after posting a Twitter thread that began: "a white owned trendy spot on ossington is selling bone broth across from golden turtle pho. also sexualizing 'jerk' sauce and pho hot sauce and making 'superfood dumplings' for profit? y’all im (sic) sick." Ripe Nutrition did sexualize the jerk sauce, calling it "Jerk Me," which is corny, but talking about a white-owned business makes it sound like Kwong's obsessing over the racial aspect of this situation rather than any perceived cultural ramifications. Notice that Kwong's bone-broth outrage was compounded by the fact that Baird had the temerity to sell pho hot sauce right across the street from a pho restaurant. Try to imagine how the owners of the Golden Turtle felt about a nearby establishment charging an exorbitant price to well-heeled health nuts for a beautifully-packaged hot sauce that they give away for free. They couldn't care less. It's the pandemic that's killing their business.

Evy Kwong continued (grammatical and spelling mistakes have been left intact): "the cultures they are taking from literally fight daily for legitimacy. the *wellness* cleansing of the food, the lack historical understanding, and the number of followers is alarming. im not tryna knock small businesses but damn, this one hurts." But is anything about this situation "alarming"? Kwong claimed that she wasn't knocking small businesses, but PERMISSION succumbed to the pressure and booted Ripe Nutrition out of their store. Then they posted this on social media: "We acknowledge the hurt this has caused and apologize sincerely. Our pop-up was not in line with community values or our company ethos, and we have decided to part ways, effective immediately."

Evy Kwong was bullied as a child due to her ethnicity. She tweeted: "i legit threw out my chinese food lunches cos white kids would make fun of it all day. i bought into pizza day and dry ass turkey burgers. so did many others. and now you taking our culture and selling it? and people think it's legit? damn." Bullying in any form is wrong, even if it only entails the forced embrace of dry burgers, but when you eventually get a platform do you use it to seek revenge on proxies for your grade school oppressors?

The comments on Ripe Nutrition's Instagram were flooded with outrage over cultural appropriation and lack of diversity. On the podcast Kwong co-hosts, the hosts linked the bone broth skirmish to BLM and the lack of black fitness instructors. They were talking with a quasi-religious fervor that only makes sense to fellow adherents. I'm getting worried about Canada, which seems to have caught an even worse case of the wokeness virus than we have in the U.S. In another disturbing incident, staffers at Penguin Random House Canada (also in Toronto) recently broke down in tears after hearing of the publisher's release of a self-help book written by conservative clinical psychologist Jordan Peterson. Perhaps the staffers were already in an emotional state after hearing about Ripe Nutrition's hurtful broth appropriation.