Pools I swam in on a recent vacation. 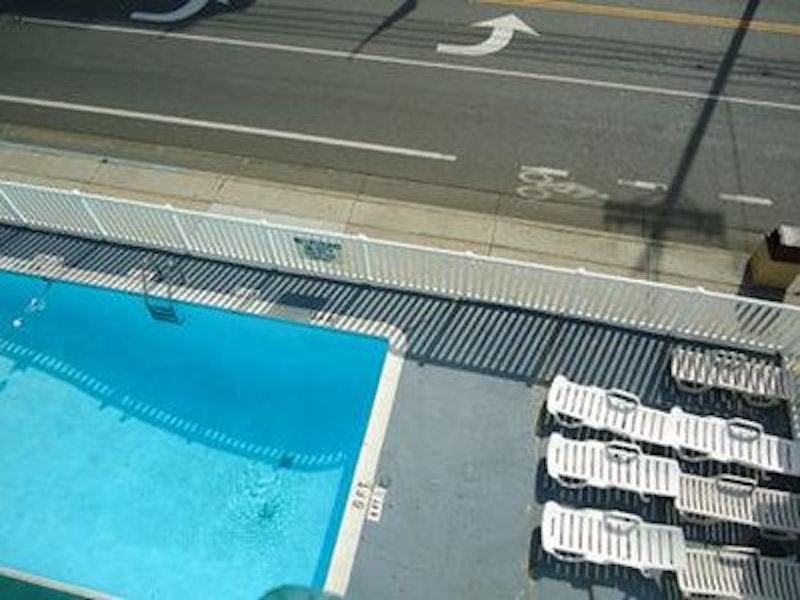 I’ve been away in Texas on a trip that doubled as a chance to visit my son and a vacation. Not entirely coincidentally, I swam more during these two weeks than I have in any two-week period in at least 15 years—to the extent, almost, that I’m now sick to death of chlorine and bare hot concrete and cheap deck chairs. What follows is my vacation, in pools.

The Neighborhood Pool, Round Rock: My son and his mother reside in a relatively healthy apartment complex in Round Rock: young enough that management repaints facades and resurfaces parking lots regularly, but not so young that its pool wouldn’t benefit from a touch of TLC. Shaped like a baby worm somehow exploded to monstrous size,  the pool meanders from three feet at one end to a maximum depth of four feet, six inches and then down to 19 inches at the far end. Trees and bushes are set far away enough that the sun’s full intensity hits the water—creating psychedelic ringlets of heat as one glides under the surface on a cloudless afternoon—but not so far away that the abundance of flowering fauna doesn’t wind up littering the water with flower buds, which sounds whimsical in print but is gross in practice. We observed a team of staffers skimming the pool with nets on a few mornings; their efforts didn’t make much of a dent. Trash was everywhere; this could be interpreted as a management fail, but I choose to point a finger at inconsiderate residents who don’t see the point of cleaning up soda cans and snack wrappers prior to leaving a non-public pool.

Underwater swimmers, beware: the pool bottom is stucco-esque, which is wonderful if you enjoy scraped knuckles and shins. (What is the rationale for surfacing a pool this way, ever? Contempt? Laziness? Cost savings?) At times the disinfecting chemicals overwhelmed, and like every other shallow Texas pool, no lifeguard was on duty. But it was so relentlessly hot that we made a point of going there every day for an hour or two to play “Marco Polo,” practice handstands, challenge each other to swim long stretches underwater, or engage in the kind of expansive father-son conversations that are possible when nobody else is (usually) around to enjoy the pool their rent payments are subsidizing.

The Pool at the Super 8 Motel Near the Houston Space Center: Two notable firsts from this vacation for me: asking Siri for help and depending heavily upon privacy-dissolving GPS technology. The odyssey from Round Rock to Houston was soul-crushing enough to deserve its own column. That the motel I’d booked was a dump seemed like a bad omen for our trip to the Houston Space Center. Of course the pool, glimpsed quickly through a gate, appeared tyke-sized—a parody of a hotel pool. Given the day we’d just survived—the Rothko Chapel being a joke, the Houston Natural Sciences Museum being overpriced and killjoy crowded, all the driving and confusion—it all made sense. Until, that is, we threw up our hands and decided to swim. The pool was wider and deeper than anticipated, an L-shaped oasis that went to five feet with a smooth, sloping bottom and umbrellas ensuring that patches of cool concrete were available. Again, we had the lifeguard-less area to ourselves most of the time. One notable exception: when two senior citizens got in and proceeded to make out while we were drying off. This had happened at the neighborhood pool as well, when a pair of thirtysomethings caressed and fondled and snoggled while pretending to pay attention to their son, who was not yet an accomplished swimmer. A word to the aroused: “sexy time” is as insufferable poolside as kids running, pissing in the pool, or jumping onto other people. Build your own damn pool.

The La Quinta Inn (University Area), in Austin: Along Interstate 35 a few miles south of Round Rock and a few miles north of downtown Austin, there is an area I call “Overpass Gulch”—a wasteland clustered with storage centers, restaurants and hotels. It’s a miserable place bereft of drug stores and gas station on the side of the highways where hotels predominate, busy with traffic and bleak; this is where the La Quinta Inn I stayed at for the last couple days of my vacation is situated. Not an especially terrible establishment to hang one’s hat, but the surroundings scuttle the friendliness and helpfulness of the staff, the relative generousness of the complimentary breakfast spread. It certainly doesn’t help that all of the rooms face outdoors and that the walls are thin: a constant soundtrack of people yelling, laughing, slamming doors, flushing toilets, cars and delivery trucks rumbling along the avenues and crowding the highway. The pool is a saving grace that feels like a secret, wrapped in the hotel’s looped caterpillar-like structure and shrouded in shadow. A sparsely attended, writ-large version of the Super 8 pool, it offers an adequate length for a tall adult to indulge in lap swim, though there’s something uncomfortable about the fact that two dozen rooms overlook the pool space. The failure of the sun to slice through lends this pool a feeling of ease and escape, but because the constant churn of traffic does penetrate, so it’s almost as though you’re swimming around on an island abutting a highway at rush hour. Very peculiar.