I Fake Out a Cop 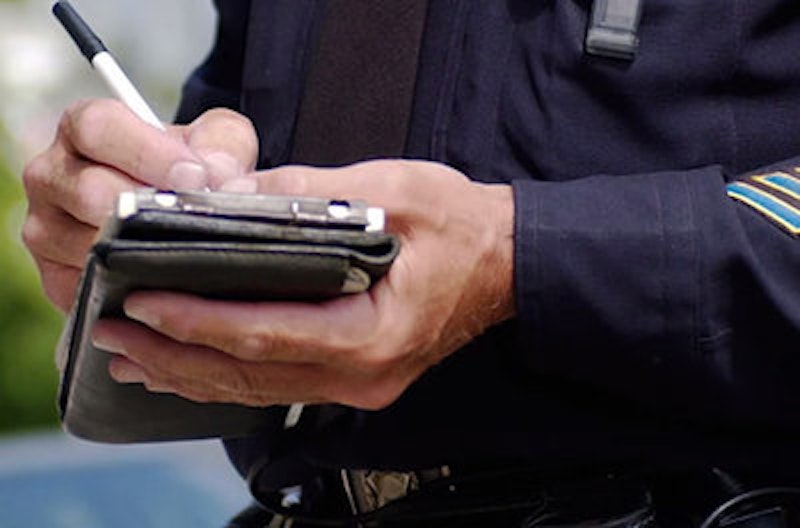 The cop is a brute, a big fellow who beckons me over with a sardonic double-twitch of his four fingers. He holds these before him and moves them like a flipper, all in one piece. The twitch is leisurely. That's what makes it sardonic: the fingers barely flex, only their tips can be bothered to move, but I still have to come over. Of course, it takes me a moment or so to realize what I'm supposed to do. He does the twitch again. An ancient gesture like that, the “c'mere,” and I have to see it twice before I'm clued in. As far as I'm concerned, I don't get into trouble. But this time I have.

“You cross red light,” the cop says after we establish that I don't speak French. I nod. The cop smiles to himself. “Okay, my friend, okay,” he says. But who knew crossing mattered so much? I've made a few dashes before and nobody objected. I recognize that it's not the legally mandated thing to do, but really—a problem?

The cop stands taller and wider than I do, and the underside of his chin has an air bag of fat. (I think there may have been stubble climbing along the air bag, plenty of stubble.) He has on camouflage pants because that's how cops in Montreal are protesting their pension troubles. “Identification,” he tells me. “Come on.” I say I don't have any on me, which is kind of true: I have my library card, but there's no picture.

The cop motions at my book bag. “And in there,” he says. I get busy hauling open the zipper, a tricky job since the tab snapped off a year or so back. I have to pinch the zipper carriage between my fingers and hope for the best. Really, I ought to be wondering if he can search my bag at all. Don't cases get thrown out this way? But I go to work.

Not that he's paying much attention. At this point the cop has pulled a stumpy dark notebook out of his pocket, and the cap is off his pen. He's going to write something, and that's what he's concentrating on. I pull my bag open like a flap and hold it out to him; inside is an umbrella. “Yeah,” the cop says, taking a glance. Then he's back to his notebook.

“Address,” he says, still loud. I think but I can't think long. “Three-six-one-seven,” I say, because that's similar to the address at my previous place. Now a street name. I want to pick a street name from wherever, but I don't know what streets are in what neighborhoods. Too easy to catch me out. “Saint-Zothique,” I say. That's literally around the corner from my real apartment.

And there the questions end. The cop sniffs and writes. He doesn't look up. “Goodbye,” he says into his notebook, and I trot off. I notice that construction is going on. A street’s getting torn up and traffic is getting routed here and there. Police have been stationed to make sure cars go and people cross when they're told. Hence my friend.

I suppose the point of our exchange is to make sure I don't try a dash at the next red light. If so, the plan works. I am scared straight and spend five minutes before the traffic has been flagged along and a lady cop motions me to cross. Later, though, on my way home, I'm back to my old habits.

What did I learn from my brush with the law? That some people think they're innocent even when the law's against them, and that in this case I was one of those people. It's great for the nerves.