Down on Vernon Blvd.

Auspicious sights of future stars (like The Talking Heads) and architechtural treasures taken in during the recent Thanksgiving break. 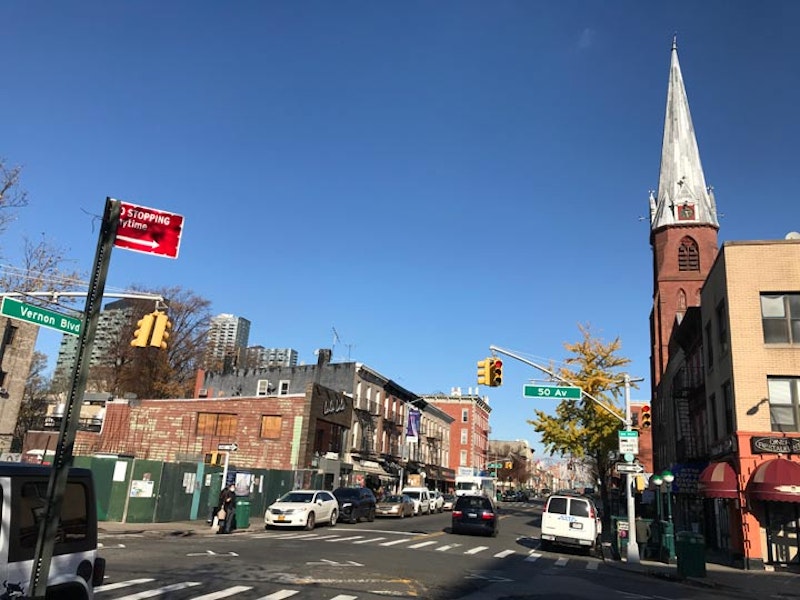 Mild weather got me out of the house three out of the four days of the recent Thanksgiving holiday, and for once, I wasn’t weighed down with the turkey feast as I did not join relatives as usual. Though I’d tested negative two weeks previous, I didn’t want to take any chances with their health, since I see them only a handful of times per year. I was able to walk for 17 miles over three separate trips along Vernon Blvd., over the Kosciuszko Bridge, and into the tonier realms of Brooklyn Heights in which I explored the new Brooklyn Bridge Park (remembering a few years ago when it was an industrial wasteland, I was surprised the wealthy burghers of The Heights allow me admittance to their new waterside park).

In the above image we see Vernon Blvd. looking north at 50th Ave. in Hunters Point, Queens toward the steeple of St. Mary’s Church. Until 1954 this was an approach to a bridge spanning Newtown Creek, which is behind us in the photo. This spot has been the location for a succession of bridges that crossed Newtown Creek from Hunters Point to Greenpoint, the first built in 1840 by the Ravenswood, Hallett's Cove and Williamsburg Turnpike and Bridge Company (that also constructed Vernon Blvd. along the shoreline). In 1903 that bridge was replaced by a swing bridge across the creek, but it was doomed when the Pulaski Bridge was built in 1954. In 1939, the first Kosciuszko Bridge had spelled the end for Penny Bridge, which also spanned the creek.

St. Mary’s, at Vernon and 49th Ave., was built in 1887 and designed by church architect Patrick Keely. St. Mary’s, with its distinctive clock steeple, was the tallest structure in Hunters Point for over a century until the Queens West development of the 1990s set off the current spate of glass-clad residential skyscrapers in the blocks to its west. The church is built from brick and brownstone in a simple Gothic design, featuring multiple pointed arches across the façade on Vernon Blvd., and a tall steeple that rises several stories. Clad in gray slate, the steeple houses clocks on each side, and marks the skyline as it rises over Vernon Blvd. 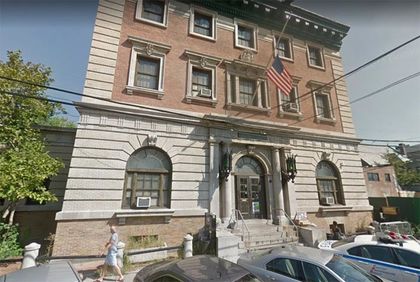 The three-story neo-classical 108th Precinct Police Station was built in 1903 by architect R. Thomas Short on 50th Ave. west of Vernon Blvd. in a flamboyant neo-Baroque style. It continues to serve its original use and is one of the most architecturally significant buildings in the area. What were perhaps the stables are adjacent on 50th Ave.

The 108th, as with most police precincts in NYC, displays two green lamps at the entrance. The tradition of green lights dates back to colonial times. According to the NYPD website, "It is believed that the Rattle Watchmen, who patrolled New Amsterdam in the 1650's, carried lanterns at night with green glass sides in them as a means of identification. When the Watchmen returned to the watch house after patrol, they hung their lantern on a hook by the front door to show people seeking the watchman that he was in the watch house. Today, green lights are hung outside the entrances of Police Precincts as a symbol that the ‘Watch is present and vigilant." 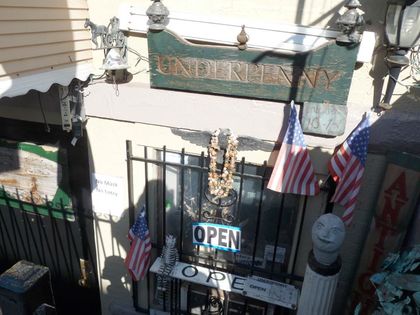 This is a fairly new addition on 50th Ave. just east of Vernon Blvd. Underpenny Museum is a junk shop, but it also bills itself as a museum of kitsch, a tribute to ephemera, in the vein of the City Reliquary in Brooklyn. Inside you’ll find rare art, sculptures, jewelry, and most notably, a large collection of 19th- century cast-iron pieces. Some is for sale, but some is on exhibit only: hence the “museum” moniker. 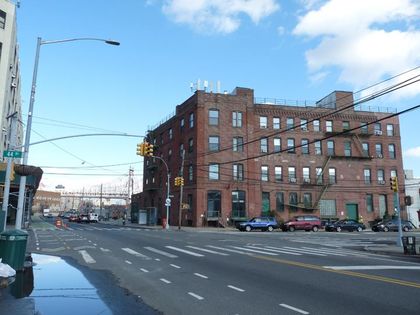 Talking Heads are perhaps more associated with the Rhode Island School of Design in Providence, where the band originated, or the Lower East Side, where they made their name in the club scene of CBGB and the Mudd Club. However, they’re associated with southwest Long Island City as well. The band practiced in this industrial loft building until 1979 at 9-01 44th Dr. at Vernon Blvd., and bassist Tina Weymouth and drummer Chris Frantz lived in the building as well in 1976-1977. 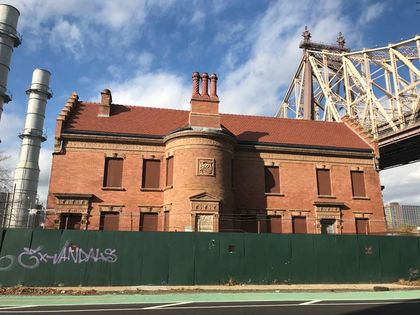 The New York Architectural Terra Cotta Works was established in 1886 by James Taylor, who was fresh off successes in the Boston firms Lewis and Wood and the Boston Terra Cotta Company. The New York works would go on to produce terra cotta for Carnegie Hall and the Ansonia Hotel. While Taylor died in 1898, his NYC terra cotta works would continue to thrive until 1928. Its small office/showroom building, built in 1892, still stands at 42-10 Vernon Blvd. The little brick building has been landmarked, and recently the exterior was rehabilitated by Citigroup, but any future uses for the building are still undetermined. 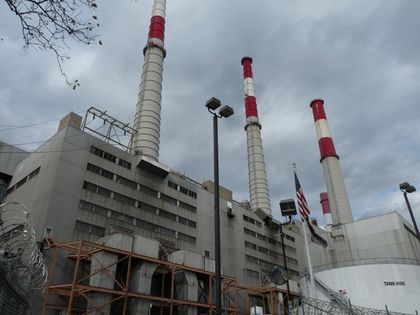 “Big Allis,” officially known as the Ravenswood Generating Station, at Vernon Blvd. and 36th Ave., provides 21 percent of the electricity consumed by New York City. It was constructed by the Allis-Chalmers Corporation; when it opened in 1965, it was the world’s first million-kilowatt power plant. It has been owned by several: Con Edison, then Keyspan, National Grid, and TransCanada since 2008. Its red and white smokestacks can be seen for miles in Queens and Manhattan. The plant sits on the former location of the 1744 Blackwell Mansion; the northwest Queens colonial-era family also originally owned what we now call Roosevelt Island. 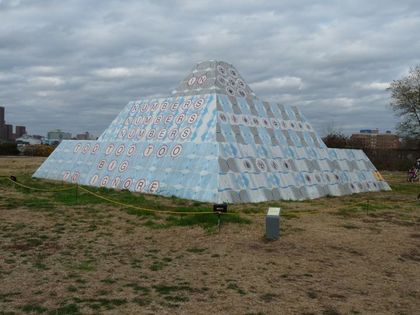 Named in tribute to its proximity to Greek-flavored Astoria, this waterside area along Vernon Blvd. between Main Ave. and Broadway was a dumpsite until it was “rescued” in 1986 by a coalition of artists/activists headed by Mark di Suvero. It’s now an outdoor workshop for aspiring artists and as a waterside park.

Exhibits change frequently but a recent visit provided views of a wall filled by what looked like Delft pottery tiles screened with images of Colonel Sanders and Chairman Mao; the pediment from the top of one of the old brick buildings in the neighborhood detached and placed on the ground; what looked like plaster casts of human torsos and rear ends arranged around a pile of hay bales; a large group of human-sized plaid doughnuts; and other bizarre images. 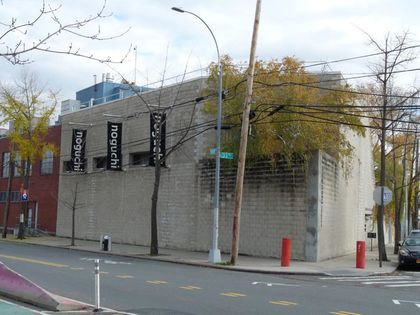 Just south of the Socrates Sculpture Garden, at Vernon and Broadway you’ll find a museum dedicated to Japanese-American expressionist sculptor Isamu Noguchi (1904-1988). Though born in Los Angeles, Noguchi spent most of his childhood in Japan before attending Columbia University to study sculpture. Among his more notable works are the bridge in the Peace Park in Hiroshima, sunken gardens for the Beinecke Library at Yale University and Chase Manhattan Bank in Manhattan, the Billy Rose Sculpture Garden in Jerusalem, and Moerenuma Park in Sapporo, Japan. Noguchi also designed stage sets and furniture pieces.

250 of Noguchi’s works are on permanent display here, including stone, bronze and wood sculpture, “Akari” paper and bamboo light sculptures, his sets produced for choreographers Martha Graham and George Balanchine, and an outdoor garden. 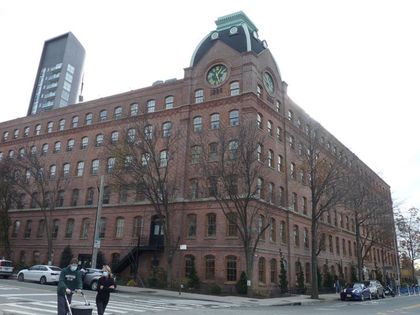 I first encountered the former Sohmer Piano factory, at Vernon Blvd. and 31st Ave., several years ago when it was still occupied by the Adirondack Chair Company and spoke with John Pupa, Vice President of Operations for Adirondack. He said that Adirondack no longer heated the building with coal but still maintained its old Hewes and Phillips coal-burning oven and took coal deliveries. It’s not the only piano factory converted to luxury in NYC of late—I was surprised to discover that the fortress-like, hulking Steinway factory on Ditmars Blvd. and 45th St. in Astoria became the Pistilli Grand Manor, and the clock-towered Estey Piano building and its distinctive clock tower in the Bronx’s Mott Haven became residential in the early-2000s.