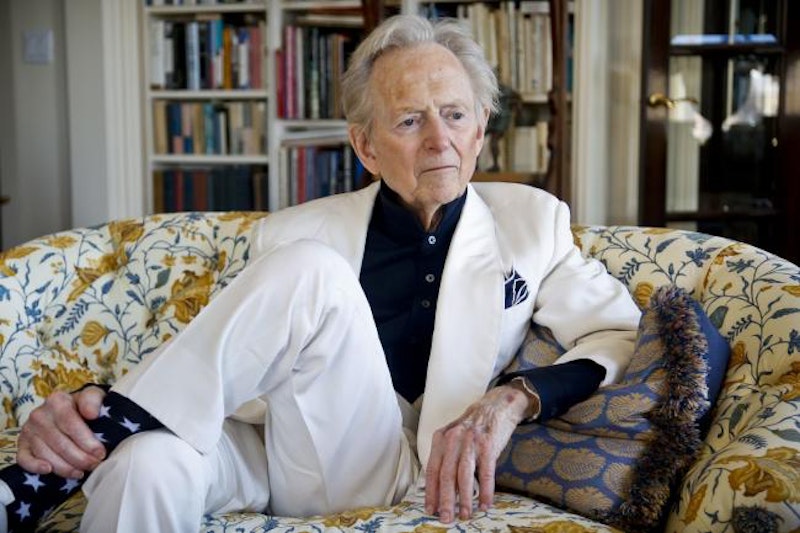 I always thought Tom Wolfe was too hard on Mrs. Arda Ella Otey. She’s mother-in-law to the young hero of A Man in Full, Wolfe’s second novel. Dumped by a well-to-do husband, the poor lady maintains herself by the sweat of her brow. There’s something admirable about that, or so you might think. But Wolfe won’t have it. He tells us the silly thing had been “intoxicated by a faddish notion spread by books, women’s magazines, and television shows: namely, that such a divorce was not a defeat but a rebirth, an exit ramp from the Rut, a chance for a new and wonderful life.” Mrs. Otey pulled up stakes and got a job, but then reality came to call: “one day she woke up to the fact that she was now an obscure woman in her forties, in a strange place, on her own, hunched over a word processor in the circulation department of The Harvester, a Contra Costa County shopping newspaper.” Now she harps on her old status and resents the hero, a decent young working stiff who got her girl pregnant.

The novel winds up with the young stiff forging a new life of his own. Together with an ex-millionaire who has seen the light, he begins spreading the word of Stoicism. This is how the two men will make their living and improve the world: by talking at people. I guess that’s quite different from spreading a faddish notion, but the difference is hard to locate. Stoicism is no fad; still, talking it up could be, and to get the word out the fellows will have to make use of books, magazines, television, and all the rest. Yes, the two men, young Conrad and old Charlie, have found their feet and their souls after misfired attempts at life. Each is now a man in full. But that man seems headed for a green room. Meanwhile, Mrs. Otey is there at The Harvester, slogging away.

As a novelist, Wolfe darted from one character’s viewpoint to another. But the viewpoint that counted was his own. Wolfe had a—shall we say—sturdiness of outlook. He wasn’t the sort to move a few inches in one direction or another and then see if his perceptions changed. He knew which of his characters were right and which were self-deceiving grubs. Mrs. Otey’s folly will stay folly no matter how much it resembles the fine things his heroes do (the main difference being that her fate requires more fortitude and less talking).

For a man who spent his adult life examining the outside world and writing down what he saw, Wolfe learned remarkably little over the years. What he thought as a smart-ass at Yale was the same thing he thought after 50 years of roving our society’s heights and depths and secret folds. First and last, Wolfe believed that status lay behind most of what the human race gets up to, and specifically that intellectuals criticize the United States only for purposes of swanking—that is, status. Along the way he may have picked up his belief that race and place decide upbringing and therefore character; if so, that was the addition of a last piece to a matched set. But I bet he had it to begin with. One gathers that North Carolina gentry (to play Wolfe’s own card) tend to be like that.

Was he wrong in all this? Let’s say he missed a few things. He had time to catch them, but he was minded otherwise and so strongly that he may be the only writer to chronicle the ways of the permanent down-and-outers (as in “Funky Chic” and the Bronx sections of Bonfire of the Vanities) while finding too little economic inequality for anyone, in his view, to fairly object to. Wolfe’s considered view of post-war America: “an El Dorado where the average workingman would have the political freedom, the personal freedom, the money, and the free time to fulfill his potential in any way he saw fit. It got to the point where if you couldn’t reach your tile mason or your pool cleaner, it was because he was off on a Royal Caribbean cruise with his third wife.”

Another blind spot was himself, which is a killer for a man sorting the sheep from the goats. Did Mrs. Otey complain about her lot? How Wolfe complained about John Irving, John Updike, and Norman Mailer (“My Three Stooges”), that trio of king-size gnats who just didn’t like his Day-Glo, PermaPumped, shelf-occupying, 800-page novels. Worse, there’s our man on the intellectuals. For example: “Who was this woman? Who and what? An anthropological epidemiologist? A renowned authority on the history of cultures throughout the world, a synthesizer of the magnitude of a Max Weber, a Joachim Wach, a Sir James Frazer, an Arnold Toynbee?” That’s from Wolfe’s “In the Land of the Rococo Marxists,” the same essay where he sighted El Dorado. Here he’s talking about Susan Sontag, the lady who called whites the cancer of human history. The answer to Wolfe’s snorted questions is also a question: well, sir, who are you? To follow up: how do you know she’s wrong? What makes you an authority?

Answering his own set of questions, Wolfe tells us Sontag was “just another scribbler.” But, son, you’re a scribbler. A look at a historical atlas provides a common-sense argument for the first scribbler’s metaphor. The second scribbler doesn’t have that ammunition. Nor did he think to look at the atlas, or even to notice that he isn’t Max Weber or an epidemiologist. In addition, this hater of jumped-up wordsmiths, of entitled opinion mongers who meddle in expert realms, also felt free to re-explain modern art (The Painted Word), modern architecture (From Our House to Bauhaus), and the theory of evolution (his last book, the very Wolfean Kingdom of Speech).

Wolfe started life as a conservative and then joined the conservative movement, which is something else again, more a matter of think tanks, expense-account lunches, and donor-supported magazines than of small-town life, Washington and Lee, and sonhood to a North Carolina pillar of the community who quoted Socrates. Like the movement, he became a hyped-up version of a plain original while maintaining that the other side (meaning liberals) was vain and self-regarding. Plain or hyped, the conservative believes that character swings the big stick in deciding human fate, and that its work can be witnessed up close by anybody with eyes to see and a will to overlook high-faluting theory. At its best, this belief calls up a willingness to trust one’s eyes and soul rather than editing what they show you. Such an approach may be so-so for nailing down truths larger than a backyard, but it’s fine for an artist.

Wolfe, like any gifted word user but perhaps more than most, could sense the ins and outs of response that cause words to hurtle their meaning into the brain. Hence, among many other things, Wolfe’s elastic approach to punctuation and voice, the disruptions (“It’s like we’re strands of wire intertwined in a great cable that runs through a slot, the Pranksters, the Beatles, the Vietnam Day Committee—the Vietnam Day Committee?—running through a slot, and all the wires are vibrated by Cosmo”) that ambush our expectations about a page of text but match our feel for the mind’s unremarked little movements and the way we talk to ourselves. Further, Wolfe knew the fetid, shabby impulses that crowd our mental lives—the warm innersole of existence, so to speak—and boldly laid bare the typical human’s precarious, up-and-down, minute-to-minute battle not to feel like a total moron. Wolfe celebrated unflappable jet pilots and hard-eyed Irish detectives, but he was a connoisseur of the dead-in-a-ditch social moments that afflict the rest of us.

Consider Sherman McCoy in The Bonfire of the Vanities. The bond trader’s at a dinner party and can’t reveal the one thing that will cause the other guests to pay attention to him: namely, the vast salary he makes at his dull-sounding job. The man’s desperate. Before dying socially, he flails about inside, mentally trying out cute formulas that might get his point across without sounding raw. Yet this off-balance creature has a splendid chin, broad shoulders, and his aforementioned salary. On most days he never has to notice how weak he is; the world’s too busy treating him as if he were strong. The same goes for A Man in Full’s Charlie Croker, the soon-to-be ex-millionaire and perpetual possessor of a giant chest, who kills a steer with his mighty hands because he’s afraid of looking foolish in front of his men.

Wolfe’s honesty on the manliness front is far-reaching. Often enough he writes with scorn about the man who pussies out (from Radical Chic’s hypothetical Upper East Sider hiding in the shower until the hypothetical burglars are gone, to the yacht-goers in Back to Blood, Wolfe’s last novel, who amuse the cops by being too scared to tackle a scrawny refugee that climbed aboard their boat). But the one time he writes about himself in action, Wolfe confesses that he came out the loser and never had the nerve to throw a punch (in “The Street Fighters,” where he’s beaten out for a taxi). He’s honest about the McCoys and Crokers too, the big men who stand at the top of society and look like they belong there. Wolfe figures they aren’t much, a judgment that may have been caused by exposure to their kind. If so, he pulled off a trick similar to his writing about the poor while wishing away economic inequality. He’s against these clowns but for the social order that lifts them high.

In the place of the big hollow men, Wolfe searches for the real thing, men with some kind of stuffing and no fear of bystanders’ opinions. A police detective who’s really tough, perhaps, or a fellow who’s imbibed some Epictetus, or Sherman once he’s been thrown in prison and learns to scrap. But forget poor Mrs. Otey. Whatever heroism she shows, it doesn’t register with her creator. He tended to see what he wanted to see.