A long-ago Esquire report on our scary future. 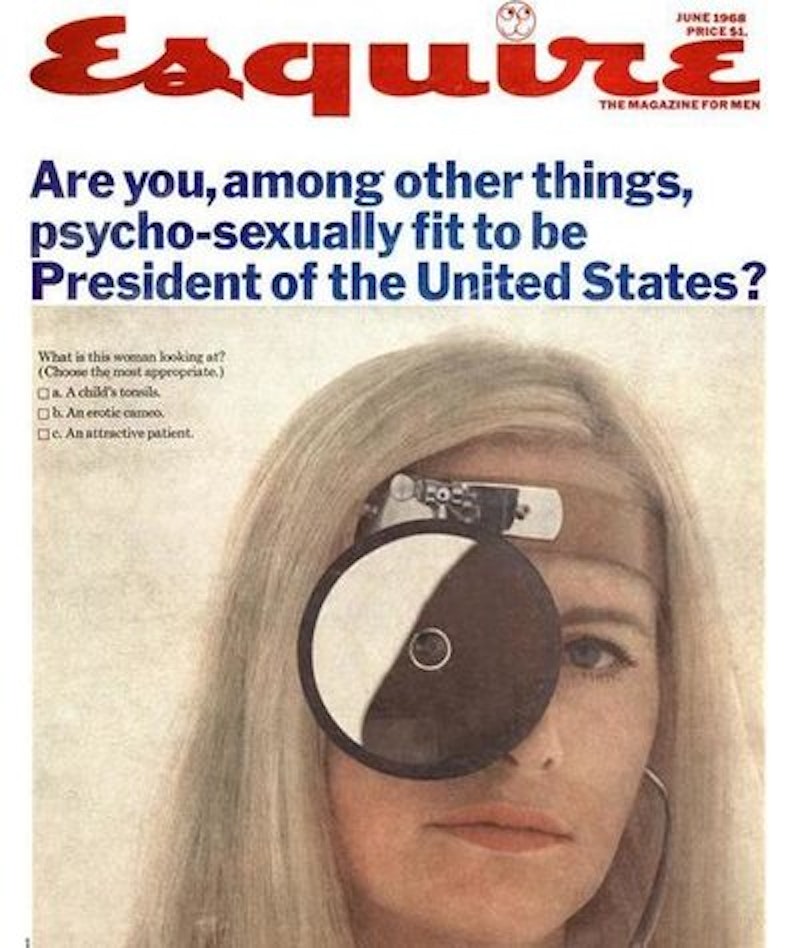 The tone somehow combines a hype man with the Great and Mighty Oz enjoying a relaxed moment next to a cool gin. Alternatively, one thinks of a long-legged British aristocrat stalking with a film of muck about his boots. The paragraphs and sentences display a quirk-mouthed, heavy-footed trudge that never becomes ungraceful. “The micro-boppers are the first generation born without the taint of natural depravity to block their progress, to clog their sensory apparatus,” the article says. That’s when it’s filling for space.

The 1960s were a great time for waving one’s hands about youngsters and cultural warp. The switch with “Micro-Boppers” is that the newcomers’ age is dropped way down. College kids and high school graduation classes had already been examined; so had kids a few years from graduating high school. Esquire seizes on kids aged nine through 13. They’re younger than the others, so they’re the future. But they’re little kids, so the whole thing’s kind of a joke, a joke that fills pages the size of a menu and brings on experts to make large claims. If it all adds up to nothing, at least there’s a pile of prose designed to jazz one’s sensibilities, and the big claims add to the jazzing.

That, anyway, is what I take to be the editors’ operating rationale. The cover is exquisite, as magazine covers go: a photo mock-up of little kids in flight. The boy has a suit and bowl haircut, the girl wears a sporty ensemble,and their arms are stretched out at their sides like airplane wings. Blue sky above, city skyline below, the future at their command, the little guys leave us behind. More crudely, the article’s splash photo taunts us with a suited, cool-eyed little stud who lounges on a divan as a cool-eyed mini-deb inhabits his shoulder. She has a cigarette, he’s drinking something amber in a fluted glass.

To catalogue the 68 paragraphs, we find one saying who the micro-boppers are (portentous throat-clearing, then “preadolescent children”) and what they’re up to (“manifesting a revolution in life-style”), one staking a claim as to the novelty of the micro-boppers phenomenon while playfully listing all the experts who have already noticed it. There follow paragraphs that quote a snotty little kid on sex and the older generation, that offer a prose-poem profiling the cohort’s several aspects, with a mention of “tribal language,” that quote experts on the urgency of the matter, with a Marshall McLuhan quote on the “media generation,” that give details on earlier menstruation ages and then give more details, and then let us know that the micro-boppers are matter-of-fact about sex. One of the micro-boppers is named Bob and has a high IQ and is well off and owns a lot of lighting equipment that he takes an interest in. Bob is “detached” about sex and he made a smart-aleck remark to an acquaintance of his mother’s.

Fifty-five paragraphs to go. They include Cousin Brucie (he says the kids are quite sophisticated about sex), thoughts on the new kids and contraceptives (they “are not being taught to find control of their environment anything less than wholesome and natural,” the article says, somehow locating the environment near the uterus), a quote from an expert on how pre-teens handle sex feelings, a shaggy dog true-life tale about a 12-year-old named Serrita and what she told her parents about the activities of some friends, material on society and kid pregnancy, argle-bargle about past categories used to classify life stages, reflections by a behavioral scientist on micro-bopper heroes and values (logical, incorruptible, “not given to the hypocrisies of the system, not falling for its sentimentalities”), and a long quote by Leonard Nimoy. By long, I mean eight sentences, with a mention of “the lost man waiting for Godot.”

Continuing, we’re told the micro-boppers speak a new language (“Where we use gestures to support words, they use words to support gestures”), that the Cowsills milling about an office provide an example of the language (“they sang snatches of their music, pushed and pulled, gradually, through movement, filling the office with themselves”), that these goings-on are “multi-media” and “tribal,” that a new lifestyle is involved, and that a man named William Clement has the goods.

Here, at paragraph 37, we have an inflection point. The article bears down on describing what the kids are up to, rather than rhapsodizing about it, and it introduces a great emphasis on how the kids are definitely not like the hippies. Clement, the behavioral scientist, tells us the kids aren’t rebels, and the article gets knowing and snooty about the hippies being “the last gasp of Calvinism.” The micro-bopper won’t sweat institutions or rebellion against institutions: “he will simply take from our society what he wishes and ignore the rest.” From here we’re given material on micro-bopper hair, clothing, and toys; that’s paragraphs 40 through 44, and they’re long ones. Shopping anecdotes tell us about precocious consumer behavior and opinions, store owners supply quotes, and it turns out that some new kids’ toys are sexy and must be described.

Twenty-three more paragraphs. TV, films, computers. A remarkable 12-year-old who makes films and speaks with assurance (“Yes, you need more to be a comedian than a tragedian”). Ten paragraphs about 10-to-12s at a school in Larchmont, New York. They do a daily in-school news broadcast from a little TV studio. The kids are focused, disciplined, on the beam, the adults flail and get in the way. Still, the principal turns out to have a quote ready on the kids and “electronic communication,” and we’re given it. The computer paragraphs tell us the kids aren’t afraid of the things and adults are, with anecdotes.

Crime stats are discussed, drugs. Smoking, drinking. A naysaying skeptical expert says nothing much is afoot. Then Clement again, who sees big things coming. Paragraph 68 arrives, the wind-up. The prose, never subdued, pitches to a height. The oldsters, we the readers, are on the way out: “Tribal thing? Will we be part of the tribe? What are we going to do when we are grandparents and there is no role for grandparents in the micro-bopper world? What are we going to do then?”

What did “Micro-Boppers” get right? The grandparents-to-be actually managed okay, as by the 1990s they were drawing a lot of entitlement money and had coffee-table books celebrating them. On the other hand, they were carted off to retirement homes to die, as is the way for everybody in the future we’re living. The micro-boppers, born from 1954 to 1958, certainly adapted well to computers and they watch a lot of TV and movies, and their verbal habits are, shall we say, rough-hewn at best. In this way they’re rather like the previous waves of the baby-boom generation, just as Gen X’ers and Millennials aren’t so different from the generation’s late waves.

The counter-culture and hippiedom did indeed prove a minority point of view. Something else was coming and it arrived, sort of the way Esquire said. We all—how to put it?—take what we want from institutions and leave everything else. The results speak for themselves and lie all around us. There go the micro-boomers. The place is a mess.