The Redemption of Time is strictly for fans of the original trilogy, and it’s still not an absolute necessity. 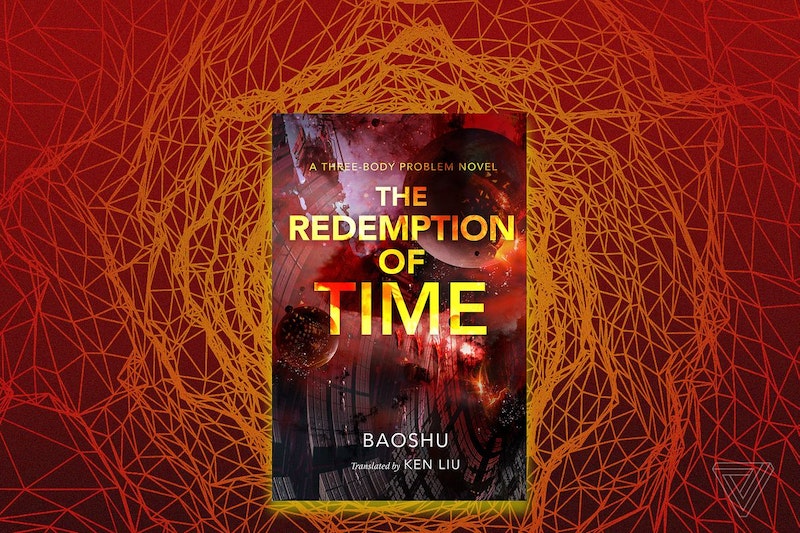 Liu Cixin had been publishing science-fiction novels in China for years when the first volume of his “Remembrance of Earth’s Past” trilogy appeared in 2007. The books became a Chinese publishing sensation, presenting a universe-spanning saga of humans faced with a threat of alien invasion and developing technologies to cope. The trilogy was translated into English: The Three-Body Problem appeared in 2014, The Dark Forest the next year, and Death’s End the year after that. They became something of a sensation in English, too.

By that time a fourth book had appeared in China, one not written by Liu. The Redemption of Time is fan fiction, by a writer and academic philosopher named Baoshu. Written on the heels of the Chinese publication of Death’s End in 2010, the story, as Baoshu says in a prologue to the new English version of his book, was “exactly what tens of thousands of readers needed at that moment: more stories from the Three-Body universe.” Liu’s publisher approached Baoshu, and Redemption of Time was published with Liu’s blessing.

It’s now been translated to English by Ken Liu, who also translated the first and third of the “Remembrance of Earth’s Past” books. Fan fiction can be terrible and insular, but also a searching interrogation of its source text. Redemption’s both.

As fan fiction, it’s not interested in appealing to outsiders. Telling a story set near the end of the trilogy, it presents original ideas and concepts, most of which provide new motivations and explanations for events in the original text—and suggest a new overall ending. It’s essentially a series of conversations, with a bit of dramatic action late in the book. The first dialogue involves two characters stranded on a planet; one explaining to the other what underlay his actions at various points in the earlier books. The second introduces a new faction and explanation of the fictional universe. The third radically changes perspective to show us a previously-unknown alien race. Two extended epilogues tie the new matter back into the overall story of the original trilogy.

This works, in large part because it catches the cosmic tone of the original. There’s a sense of scope in The Redemption of Time that not only aligns perfectly with Liu’s writing but also with classic works of American science fiction. Redemption refers to the work of some of those writers—Asimov and Heinlein in particular, along with Englishman Douglas Adams—but, like Liu, is darker than any of them. The bleakness here is a good tonal match to the original trilogy, and is in some ways even more thoroughly downbeat.

Liu also has a stronger sense of character than most American science fiction writers, and Baoshu’s able to catch the voice of at least one of those characters, who has a central role through much of The Redemption of Time and is the important one to get right. Other characters don’t come across as effectively, the women in particular. But the sense of a unique (and, to Liu’s readers, familiar) personality anchors the book in what feels like a coherent perspective.

That’s important because the scale is otherwise mind-blowing, incorporating multi-dimensional alien intelligences, a time frame of billions of years, even the end of the universe. The apocalyptic battle at the end comes off as anti-climactic, I suspect deliberately so. In fact, Redemption of Time brings out the resemblance of Liu’s work to the 1930s pulp space opera of E. E. “Doc” Smith, whose Lens man series was a series of ever-bigger battles with ever-bigger weapons. Baoshu marries that with the temporal scope of Olaf Stapleton, who imagined future histories that extended for billions of years, and with Stapleton’s mythic sense. There’s a similar feeling of a disembodied perspective observing but taking little action, and of cosmic entities virtually indistinguishable from gods.

There’s also a similar feeling of a story being used to illustrate a philosophy. In the tradition of science fiction as thought experiment, Baoshu considers possible interpretations of time and how to think about cycles of time. The structure of the book as a series of conversations echoes the form of a philosophical dialogue. Unfortunately, the payoff’s weak, resolving with a meta-fictional twist you can see coming.

The Redemption of Time is strictly for fans of the original “Remembrance of Earth’s Past” trilogy, and even for them it’s not an absolute necessity. It’s an interesting response to the novel, exploring some of its themes in a distinctive way. Still, it’s perhaps more interesting as a sign of how the story’s developing into a franchise: one notes that while a film adaptation of The Three-Body Problem was made in China only to end up indefinitely shelved, a 24-episode TV series is apparently in production. (Another movie based on a novella by Liu Cixin, The Wandering Earth, made over $600 million at the Chinese box office.)

A new tie-in novel to a successful franchise stands to make money for a lot of people if the book’s good enough and feels important to the original story. The Redemption of Time passes those tests. As science-fiction franchises go, this series is more cerebral and original than most. The Redemption of Time alone won’t gain many new fans. But it’s a better-than-average extrapolation of the original story. Liu’s readers should like it. And in the long run it could be usable material for future adaptations—which is a fair success for a piece of fan fiction.