Three Men and a Door Knob 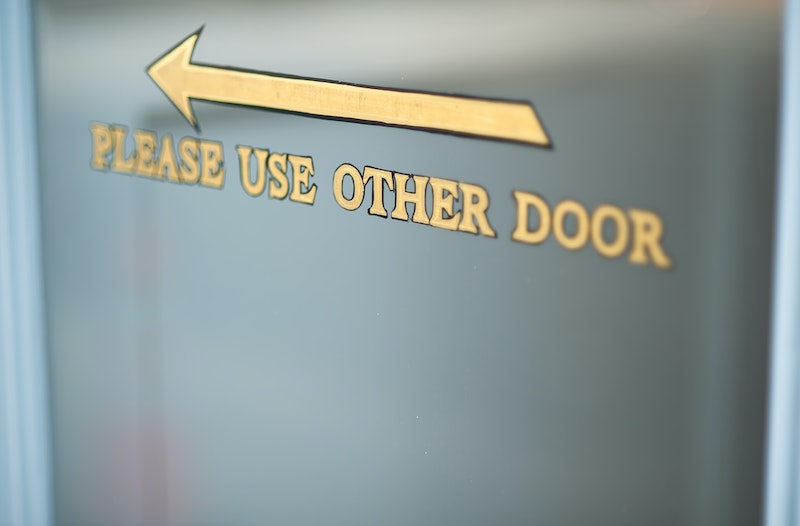 Bob, Jake, and Michael were on their way to a meeting on the other side of the office. To get there, they needed to open a door, and arrived at the door at the same moment. Bob reached for the door knob, but Michael waved him away.

“What’s this about?” Bob said. “We need to get through there.”

“That’s how you open doors in this office,” Bob replied. He turned to Jake. “Isn’t that right, Jake? You grasp the knob and turn it in a clockwise direction, and presto, open door.”

“You guys don’t know anything,” Michael rolled his eyes. “And you have no sense of how the world works.”

Jake let out his breath. “Look, this is a stupid argument—this meeting starts in 10 minutes, and since management will be there, we need to be seated at least five minutes early. Let’s just get on with it.” He reached for the door.

Michael threw himself in front of the door, knocking Jake’s hand away. “No. We’re doing this my way.”

“Neither of you seemed to have heard me,” Michael huffed. His face had turned beet red. “The rotation is counterclockwise. It’s always counterclockwise—not only that, you need to use a pointed, uniform key as you’re turning the knob. It’s been that way the last three places I’ve worked, and it’s like that here as well.”

Jake was losing patience, but maintained his calm. “How about a compromise? Michael, open the door your way, and go to the meeting. You go first. Bob and I will open the door our way, and follow you. This can be a temporary solution and we can argue and settle the practical realities another time. You good with that?”

“Not so sure of your argument, are you?” Michael was shouting. “Why should we postpone this? Why should we adopt a workaround now? Why should I accommodate a position I don’t support?” A small crowd of onlookers began to gather.

Bob gritted his teeth. “Michael, in all fairness—“

Nathan approached the trio. “Fellas, fellas. What’s this all about?”

“Michael’s being willfully abstruse,” Jake growled. “He’s holding this door hostage. I can’t even believe I had to say that. He insists—insists—that to get through that door, it’s necessary to rotate the knob counterclockwise while inserting a key —“

“—and he’s rejected the armistice we developed to move forward,” Bob added. “Nathan, tell him he’s wrong, please! Michael, are you hungry? I have a Snickers; I’ll give you half if you just stand down.”

Nathan snatched the Snickers bar, ripped open the wrapper, broke it in half and handed a piece to Michael. “Bob and Jake, homies, you’re in the wrong here—what Michael’s claiming is true.”

“Oh my fucking God,” Jake moaned, his head in his hands. “This is bullshit.”

“Hey, hey, there’s an easy way to resolve this,” Michael said, suddenly eerily calm. “Just do it my way. Counterclockwise with the key, easy peasy.”

Jake and Bob stepped away and conferred in whispers.

“Maybe we should give in,” Bob said.

“No, no fucking way,” Jake replied. “Acquiescing here just emboldens him, enables him to be an even bigger prima donna.”

“No, I’m not,” Jake held his ground. “You haven’t worked here long enough. This place is filled with Nathans and Michaels. Today it’s the doorknob, tomorrow it’s the efficacy of a system, next week it’s the relevance of an entire functional area, and next month we’ll somehow be doing all of their work for them. Give ‘em an inch, they take an acre. We’ve gotta stand tall here, or–”

Just then the door burst open, knocking Michael aside. Dwayne emerged, confused. “Were you standing in front of this door?”

Michael picked himself up. “Yes.”

“Why would you do that?” Dwayne asked “This is a heavily travelled area, and this door is opened and closed hundreds of times every day.”

“To prove a point,” Michael and Nathan answered, almost in unison.

“Whatever,” Dwayne said. “Hey, you guys missed the meeting—or what would have been a meeting if management had ever shown up. Looks like we’re rescheduling to tomorrow, or maybe next week.”

“Dwayne,” Michael murmured, hair askew, eyes gleaming coldly. “Let me ask you something. How did you open that door?”