I Was a Mohawk Warrior

At least during summer camp in the 1960s. 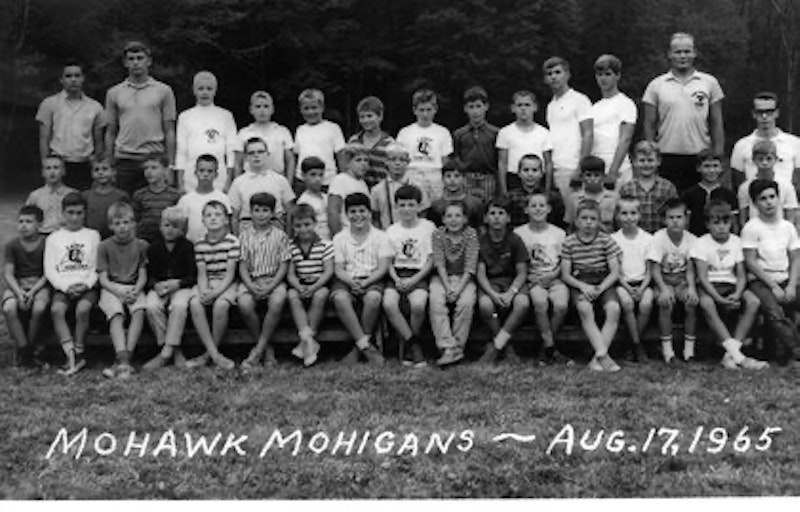 So. Those lazy, hazy, crazy days of summer are temporarily sticking around, even as there’s a minute less of light every evening, a harsh reminder that my least favorite season of the year, winter, a three-month purgatory when the otherwise gorgeous Northeast looks as desolate as East Berlin pre-1989, will be here not long after Christmas advertising commences. Lightning bugs! Fireworks (even after the 4th)! Pennant races! Ninety-degree heat and 100 percent humidity, which I relish, but most locals refer to as “Baltimore soup.” Wish it could be like this all-year round. Really, in this era of climate change, why can’t some clever environmentalist take to alchemy and permanently switch the weather of Southern California and the Northeast?

It’s quiet in our neighborhood—more than usual—and I suspect a lot of the kids have been trundled off to camp for a month or so, if they’re not swimming and clam-baking at the family’s summer home or attending a sleep-away college admissions seminar to jack up those SAT scores, pad resumes by reading a story, once, to a ghetto child, and call it “tutoring,” and pounding out those all-important essays that some 25-year-old drone at Princeton will give 45 seconds to.

As a kid, I got out of my parents’ hair for two weeks during five summers in the 1960s. Talk about hazy: while I remember two stints at Boy Scout Camp at Woodworth Lake in Gloversville, NY quite clearly—in general a lot of fun, save the counselors who were mostly real dicks, flaunting their teenage power—I’m a bit spottier on the sojourns of ’63, ’64 and ’65, when I was tucked away at Camp Mohawk, a barely-developed forest around Litchfield, CT. The signature drink at Mohawk—sort of like rum punch for tourists in the Caribbean—was “bug juice,” and this was Gitmo-like over-the-top foul. Served at every meal, it was some combo of low-budget Kool-Aid (if you can imagine that) and canned fruit juices. A nasty color, too. No water, no soda (unavailable on the premises), just bug juice. The rest of the grub was pretty crummy too (worse than Mom’s home-cooking, which was really going the extra rural mile), and there was a vague religious element, too, although most everyone ignored it. Not like Sunday school during the year.

Camp Mohawk, established in 1919 (and now exclusively for girls), was a Spartan, stripped-down set-up, with no canteen or any of the amenities that a few of my chums were accustomed to at far swankier locales. Didn’t faze me, though, since that’s the way I grew up anyway, and besides, wasn’t the whole idea that you’d spend time at a camp, not some country club? We were housed in cabins, with bunk-beds, footlockers stored underneath, about 12 kids in all, with one counselor in charge. I had a transistor radio, as did many of my fleeting new friends, and there was a TV in the mess hall, for I remember seeing the Watts riots live and thinking whoa, this country is getting too weird, too fast.

My cousin Chuck Duncan was a counselor at Mohawk (which is where my parents got the idea), and even if the downtime interaction between the older guys and tots like myself was minimal, it was a measure of security. Also, my brother Gary (five years older) and I overlapped one or two years, and though he was in a separate division of the camp, he kept his eye on me. Gary, probably the most athletic of my brothers, was a star at Mohawk: he won a tennis tournament, went boating and horseback riding and was, in his last year there, inducted into the “Order of the Mohawk,” or some other similarly named semi-secret society for exemplary campers. Today, he says maybe the honor was for “enthusiastic” kids, but I swear that’s modesty talking.

In contrast, I was a dud as a camper, though I did have fun. For example, I was a lousy swimmer—in contrast to my parents and four brothers—which I still can’t figure out since there were about five public beaches not far from our home in Huntington, Long Island. Either I wasn’t interested, or just not very coordinated in the water. Probably the latter, since I could ice-skate either. Besides, the water at Mohawk was freezing, and so I’d spend a lot of time making lanyards at the arts & crafts cabin, and shoot the shit with other bookish kids. Oh, can’t forget “care packages.” My bunkmates often received cookies from their moms, or other such contraband, but I was delighted to get letters from my mother, long missives with the neighborhood gossip, and, most importantly, clipped Red Sox box scores. One thing my parents weren’t nuts about: I’ve had facial tics all my life—which is why my occasional appearances on C-SPAN in the 90s weren’t entirely successful; blinking, as well as doing a Teddy Kennedy with the “uhs”—and one year my pal Scotty nicknamed me “Crazy Eyes.” It stuck and I thought it was really cool: my mom was mortified.

Yet nothing at Mohawk compared to the every other night games of “Capture the Flag.” They were held in a musty field after dinner, and so as the “skins” and “shirts” battled each other in (amazingly) a friendly contest, the sun would set and we’d tromp around in the dusk, exhausted, until one side finally won. It was free-wheeling, rambunctious, exhilarating, and honestly, I can’t recall having more fun as a kid. After it was over, we’d walk back to the cabins, a short trek that in the dark was kind of spooky in a Wizard of Oz kind of way, with animals making ominous noises, tree trunks that were contorted, leaves rustling and rocks to climb over. Outstanding! And this was a time before hallucinogens and other controlled substances became part of my routine.

As I said, friendships were fast but fleeting. There was a kid named Frankie with whom I really clicked, and we’d trade letters for a month or two after camp was over, and then they’d fade away. In my last summer at Mohawk, I was in the August section, instead of July, and upon arriving, Frankie (who also switched) came up to me, and said, “Hey, do you have a brother named Rusty?” You grow during the year, and it’s confusing, but we took up where we left off the previous summer, debating Red Sox vs. Yankees.