Las Vegas to San Francisco and hundreds of miles of nothing. 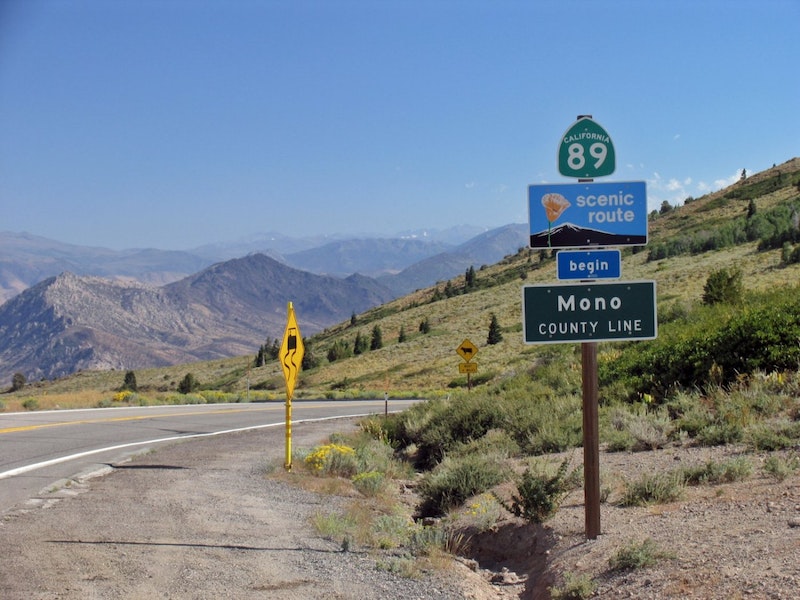 I’m listening to Car Talk, driving north on Route 95 out of Las Vegas towards Death Valley. Out here in the desert the only station the rental car stereo can pick up is Nevada Public Radio, broadcast from God knows where—I haven’t seen more than rusted out cars and abandoned trailers in 40 miles. The station fades in and out so I can’t really follow what’s happening. I just hear static, then the Car Talk guys laughing hysterically. The transmis—kkkkk—my brothe—kkkkk—Ahahahahah.

Later, I’ll find out that Route 95 runs along Area 51, and that a lot of shitsack tourists are out here just to drive down a dirt road and find a NO TRESPASSING sign. There’s also the Area 51 Alien Travel Center in Armagosa Valley, which has a brothel out back and a diner that’s also a titty bar. I stop here to smoke and the heat all but knocks me on my ass; 105, 106, nothing but cacti and scorched scrub brush. I think about the rates at the brothel, how I could walk out hoisting up my jeans and buckling my belt, wipe the sweat on my shirt sleeve. You know, man stuff. I opt for the Fireworks Range instead.

A few days later, in Seattle, I read that actor David Legeno (best known as Fenrir Greyback from the Harry Potter movies) died hiking in Death Valley. Back in 1913, Furnace Creek, CA in Death Valley hit 134 degrees—which is still the hottest temperature ever recorded, anywhere. It’s routinely 120 degrees or more there. Despite this, deaths are rare. No one comes to Death Valley for a family camping trip.

Much better to go north and west into California, past the trailer towns of ranchers and farm workers and guys who have just totally gone off the grid, and up through the Sierra Nevadas, to Yosemite, or north as I did, to the Sonora Pass and the Stanislaus National Forest. The Sonora Pass is about 45 miles long and tops out at nearly 10,000 ft. Driving more than 30 mph on any part of it, up or down, will likely end with your car turned to flaming wreckage 1,000 ft down. It took me nearly three hours to drive those 45 miles, not just because of the turns and steep grades, but because whenever I stopped I found such total stillness that it was all I could do not to abandon the car and walk off into the woods. If I had a hatchet I could cut down branches, build a lean-to, put wildflowers in my hair and live in Wordsworthian reverence until the Forest Rangers came and dragged me back.