I may have been the smartest in my English Lit class, but the reality is I was the one who flew over. 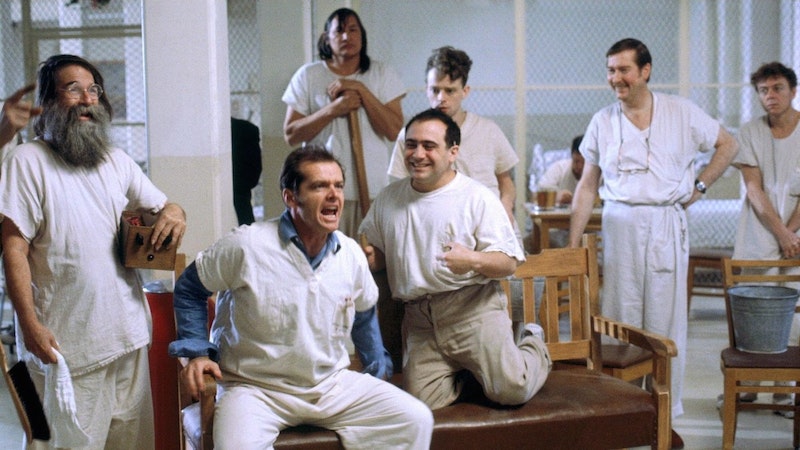 I’m currently re-reading One Flew Over the Cuckoo’s Nest in my fifth month of a Section 3 of the Mental Health Act, and it’s bringing back memories of my sixth form English Lit class. The two prettiest girls always asked for my help on the days I bothered turning up to school. One now writes for the Evening Standard and the other for Cosmopolitan. Both are blocking me on Twitter. Aside from Richard II (I remember falling asleep during a performance in London starring Ralph Fiennes) our comparative lit titles were Cuckoo’s Nest and The Bell Jar. I quickly convinced the class that Sylvia Plath’s indulgent drivel was the work of a vain, arrogant and selfish little girl blaming her failure on the fictional patriarchy and soon the class agreed. But I must’ve read Cuckoo’s Nest endlessly during the school year.

By the time I was 16 I was obsessed with New Hollywood, roughly between 1967 and 1980, and the doomed love generation. But their passion and the wildness of major players like Ken Kesey and his magic bus was fascinating and made me immediately want to experiment with drugs.

I remember our teacher (a 25-year-old blonde who had an affair with a 16-year-old friend) asking us if we believed McMurphy was actually a psychopath. As he self-diagnoses: “Now they tell me a psychopath’s a guy fights too much and fucks too much, but they ain’t wholly right, do you think? I mean, whoever heard tell of a man gettin’ too much poozle?"

Some in our outrage culture would classify him as a psychopath simply for his statutory rape conviction, but to Kesey’s credit the staff are just as vicious as his antihero is on the outside world. I remember once having to lie face down on the bed with my trousers down as the nurse administering my clopixil deliberately stole three packs of chewing gum and before injecting me said: “I always wanted to know what it was like being a corrupt guard.”

As I began reading again today, one of the opening lines from the schizophrenic Chief Bromden brought that traumatic incident back: “They’re out there. Black boys in white suits up before me to commit sex acts in the hall and get it mopped up before I can catch them."

Because psychiatry has subjective power of detention, laws that supercede British criminal law, most peoples’ worst fear is a Mental health Section 3. Because I’ve spent 16 years as a psychiatric patient, I can say it depends on the staff how painful the experience will be. Harding says to McMurphy: “The staff desires our cure as much as we do. They aren’t monsters. Miss Ratched may be a strict middle-aged lady, but she’s not some kind of giant monster of the poultry clan, bent on sadistically pecking out our eyes. You can’t believe that of her, can you?’ ‘No, buddy, not that. She ain’t peckin’ at your eyes. That’s not what she’s peckin’ at.’"

Castration and the death of natural masculinity are central themes in the novel, and yes, they’re still a part of psychiatry, but it really depends who you are and what you’ve done. I may have been the smartest in my English Lit class, but the reality is I was the one who flew over.