An enthusiasm for NYC subway designs. 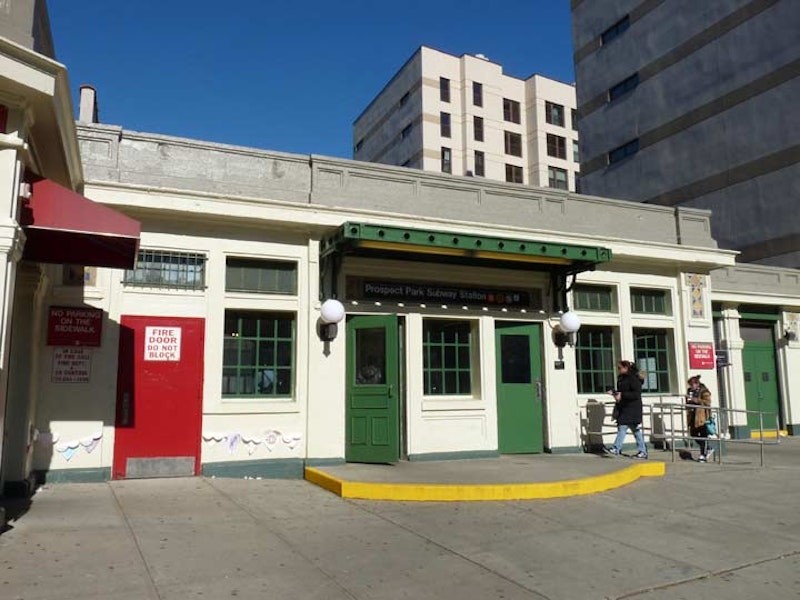 It’s almost time for the annual NYC MTA Holiday Train spectacular, which takes place each Sunday between Thanksgiving and New Year’s. Subway cars from the 1930s run the tracks past a mostly unsuspecting public, though the trains are packed with aficionados drawn from several different types of enthusiasts. There are the wide-eyed tourists, but also costumed swing bands and dancers. There are the young guys ogling the swing-dancing women, but there’s also another group of young guys with cameras who are there to see the ancient subway cars; these so-called “foamers” are all but unaware that women are present. I’ll be there, as well, one or two of those weeks.

I’ve always been a subway infrastructure fan. I like riding the old cars, but it’s the subway station design, as well as subway car design, that grab me. I can’t call myself an architectural expert; “enthusiast” is a better word. I’ve taken note of the signage, turnstiles, mosaics, columns, color schemes, and everything that make up subway station interiors since I left the crib and took the trains with my parents and then on my own. It all sprung from an overall love of NYC “furniture design” that began when at five or so, I noticed that all the old ornate lampposts in my neighborhood had been replaced with modern streamlined ones.

I’m aware that enthusiasm about any aspect of the subways is unfashionable in 2018. We just had a freak snowstorm that the city was unprepared for that left the roads unplowed and the subways and commuter railroads even more disastrous than usual. Deferred maintenance over the decades has left the over 110-year-old NYC subway network a mess, especially on the weekends, there are no quick repairs—and the pain will extend to every subway rider’s bank account, with four percent fare raises.

When subway design is brought up, the original designs in the first subway stations built from  1904 to 1908 by the architectural firm Heins and LaFarge are invoked. Think of the #6 train stations in lower Manhattan or the Brooklyn Borough Hall Station, with their large ceramic station identification plaques, decorations like rosettes and mosaics.

Critics also mention the large subway stationhouses constructed by Heins and LaFarge. Many of these have been torn down but a few survive—the large one at 72nd St. and Broadway, which was joined by a new one a decade ago; Bowling Green in Battery Park; and one at Atlantic and Flatbush Aves. that was originally an entrance, but now exists as a glorified skylight.

But Heins & LaFarge didn’t build every stationhouse—and there are a large number of them that have never gotten much press, constructed in the 1910s for Brooklyn-Manhattan Transit stations (the BMT) built during that decade. One, the Prospect Park station show above, can be found on Lincoln Rd. between Ocean and Flatbush Aves. in Lefferts Gardens in Brooklyn. 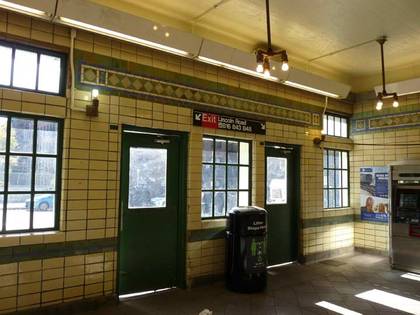 Most of these stations have basically the same design that consists of alternating, differently-colored beige tiling, and can be found along what was known as the Sea Beach Line (today’s N train stations in Brooklyn) though some are along the Brighton line (the Q train) and the old West End line (the D). They’re found on stations that travel in open cuts as opposed to elevated lines.

In these years the subways’ chief architect was Squire Vickers, a painter and interior designer by trade who’d studied under Heins & LaFarge. He imbued all these stations with an “Arts and Crafts” esthetic with glazed tile and terra cotta in differently-colored shapes. Vickers and his team designed the subways’ outdoor stations as well as the underground station mosaic and tiles. When the Independent Subway was under construction beginning in the late-1920s, Vickers refined the esthetic even further, dispensing with most ornamentation completely, creating Sans-serif signage and restraining stations to one bold color. This streamlining has informed all subway stations built since that time.

The “Arts and Crafts” architecture movement of the late-19th and early-20th centuries was promoted by designer William Morris and philosopher-author John Ruskin, who argued that a moral and healthy society could best be achieved when workers designed the things that they made by hand, instead of the mechanized production methods brought about by the Industrial revolution. “Artisanal” architecture and design, in today’s parlance.

Ultimately, the production line won out, but the craftwork and simplicity of the utilitarian BMT stations can be seen to have their own kind of beauty—especially since the Metropolitan Transit Authority has been restoring a number of these stations. A masterful job was done at the Prospect Park Station… 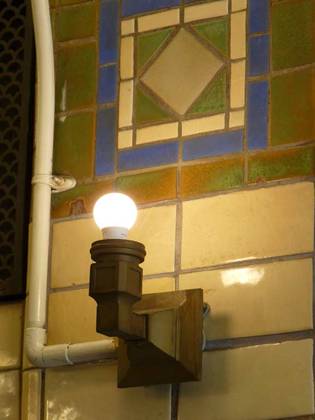 …which had been allowed to retain its original lighting sconces both on the walls and hanging from the ceiling. Not chandeliers, they’re simple, workmanlike devices. The diamond tilework is a hallmark of BMT station design; nearly all BMT stations designed from 1911 through 1928 (after which IND stations dominated) feature ceramic diamonds in some color or size. 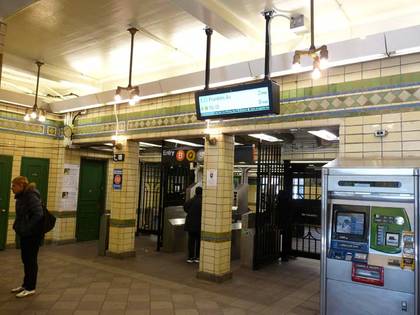 Though the design is over a century old, it blends with modern additions, such as chrome turnstiles, MetroCard vending machines, and even the ceiling-suspended “countdown clocks.” At Heins & LaFarge Beaux Arts stations built from 1904-1908, the blend is not as easy. 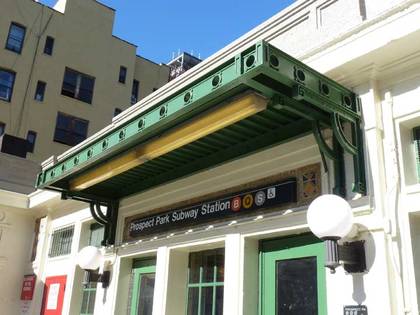 The Vickers stations, as I call them, have a simply-designed green canopy over the front entrances, as well as slightly larger sconces carrying white globe bulbs. The stations have standardized black and white station signage, in universal subway use since the 1980s.

My enthusiasm for subway design remains undimmed by the trains’ performance record. I enjoy the new designs along the Astoria Line, with thick tempered glass replacing opaque station walls; the new stations along the 2nd Ave. line (among the artworks is a Chuck Close portrait of Lou Reed); and the new Hudson Yards station at 11th Ave. and W. 34th, even though Hudson Yards itself along with the “new” Long Island City, where the new Amazon HQ will supposedly go is, I fear, an anonymous thicket of glass towers.