There are worse things in life than one person watching basketball while another bakes pies. 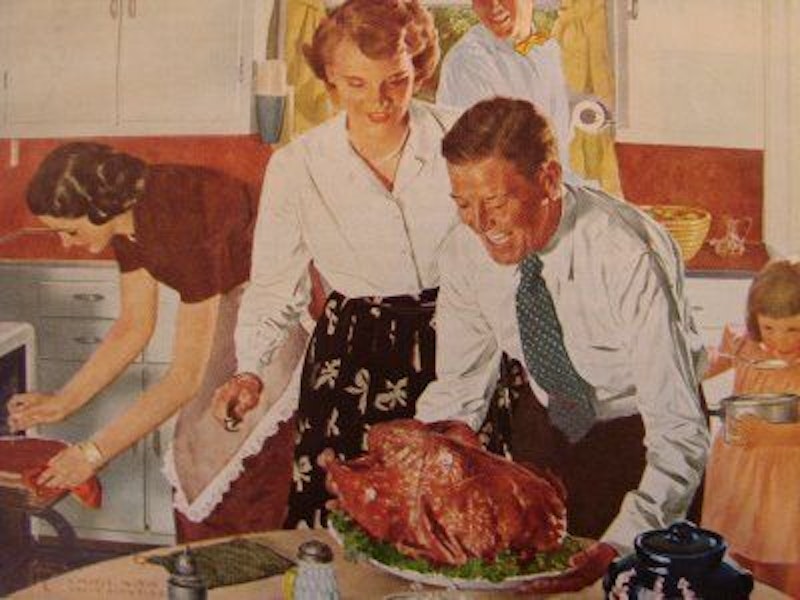 Holidays such as Thanksgiving are celebrations of tradition that are themselves traditions, and one wrinkle is that our traditions may be problematic in certain respects. I think I'm usually a reasonably good gender egalitarian. I'm a 60-year-old man, and I don’t want to oppress women. Specifically, I intend not to oppress my partner/gf/paramour/lover/woman, or whatever may be the right term, though I may already be in trouble in that regard in this article. I want what she wants to be as important in our relationship as what I want: her career as important as my career, her need to chill out as significant as mine. The dilemma there is that I also want what I wanted in the first place.

At one point in the afternoon last Wednesday, I suddenly departed my body and got a cross-section view of what was happening in my house. I was watching college basketball games on television, kind of dozing on and off, here and there giving a yell when, for example, Zion Williamson slammed another one home. She, on the other hand, was baking pies, and working on a whole dinner to take down to my 93-year-old mother's house in Virginia, pounding and slicing things, with a cute streak of flour on her cheek. My main contributions were making the plan in the first place with my family, and half-heartedly offering to help.

Seen from inside my body, it was a lovely day of domesticity, with the pleasure of pie beckoning from the oven at its end. Seen from outside, it suddenly struck me, it might’ve been interpreted as a scene of exploitation. Either way, it was an illustration of the persistence of gender roles. Neither of us has really wanted or enacted these roles in our lives, and for that matter my mother was herself never a particularly traditional wife or mother in these ways. But here we were, recapitulating a calendar scene from the 1950s, or behaving in a markedly gender-differentiated manner. It's not that you make it happen; it seems to happen to you. It takes conscious effort to resist.

It's still the case in a lot of situations: the men talk, drink, or play, for example, and the women serve. The basic impulses seem remarkably enduring, so much so that even people who are aware of the problems slide into them in various situations; the roles seem “natural,” or even just the smoothest way of doing things. Perhaps our competences vary somewhat, and a woman or two here or there might’ve received my help gladly, only to decide some minutes later that things would go better if she just did the whole thing herself. That sort of incompetence, though, might itself be something of act or a symptom of privilege; I didn't need to cultivate those skills, or I specifically tried not to so I could get people to do things for me.

There are worse things in life than one person watching basketball while another bakes pies, and there are various ways that people might take up traditional-seeming roles, during the holidays or otherwise. They might take them up unreflectively or just directly enact them. That's perhaps the way the 1950s nuclear family is portrayed, though there was obviously a lot more roiling dissatisfaction than was apparent from the representations. Or you could take them up consciously, by choice; one gazes squarely at the problems and chooses the traditional roles anyway. Or one could take them up ironically, almost as a game, or something that could be fun, or like sexy role-playing, though one might wonder then why the male person should portray the man and the female person the woman. Or, in what is perhaps not the best option but seems to be the one I take repeatedly, one could reject these roles aloud and even in one's head and slide right into them anyway, or spend the whole day before Thanksgiving kind-of-accidentally being just the sort of person you declare that you are not.

I finally got up a little gumption as we made the drive Thanksgiving morning and asked what she really thought about me and her and gender and how we spent our Wednesday and so on. She said it was no problem. Then she said she'd been up all Tuesday night worrying about stuff like that, and it appears that it’s something of an issue after all, for us both, really. We both feel the pull of the roles, and we both feel wrong in enacting them, to whatever extent we suddenly become aware that we are.

I wonder whether this is also happening to people in their 20s and 30s. I'd like to make a transition from unconsciously falling into a life I repudiate to putting the whole thing into conscious play one way or another. But to do that, I'd probably have to get up off this couch. It's been a long weekend, and there's football.