They're All Dead Now

Seeing the pictures of the victims in Chapel Hill. 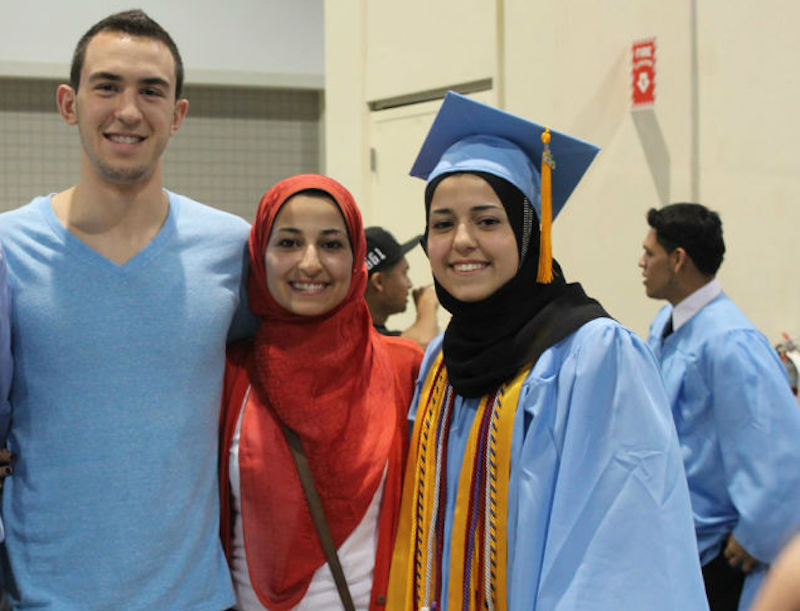 Yesterday I started crying about the UNC students. Not like a baby, more like a seal. I was crouched in front of my screen, and my nose and mouth suddenly flew away from each other, and my eyes seemed to grow bottom rims; I'd never known rims were there, but now I did because they were holding back water. I barked, or maybe croaked; a sound barged out of my mouth. I sobbed, that was it. One sob, two. Then I stopped. I was surprised at myself. I cried, I thought. I mean, it had been years. I don't know how long. You don't get a lot of chances to cry when you spend all your time in your apartment, looking at the Internet. You may see sad things, but they're on your screen. Why cry at them?

I'd been looking at the photos of the young man and his wife and the wife's sister. First the picture on the news story, where you had all three of them. The two girls and their scarves. Him kind of a galoot, his eyes sticking out, but with height and shoulders and an easy smile. I admit that, looking at the girls, I sized up their faces the way I always do; I looked for the features and proportions that I like. Yep, sorry. Head scarves frame a face anyway, and then I have the habits that I have.

I looked at the three kids, and then at the news story and read about the little we knew. At BuzzFeed, I think, I found a round-up of pictures. The older girl with her father at the wedding. Yes, I checked out her figure. The older girl graduating; I think she stood against a campus building and had a diploma in her hand. The two girls, smiling. The guy and a bunch of his friends, lying on the grass so that their faces made a circle; the guy was the base, they had all arranged themselves so he was bottom center of the wheel. I don't know how many people there were, five or six. Just to the left of the guy was a fellow with an immense head and a little beard, like he might be a jolly fat guy; he looked so different from everyone else. He was part of the gang too, and they were all smiling, eyes bright. That was true of all the pictures. Everyone you saw looked like life suited them fine. Being alive was just their cup of tea.

The guy was a dentist, his wife was going to be a dentist. He helped poor people. He tweeted that tweet about shaking his head because of people who wanted to kill the Jews or kill the Palestinians.

The three were just kids: 23, 21, 19. But they were leading lives already. There were things they wanted to do, and they were stepping up. I guess Middle Eastern kids are like that. They get married right at the start of their 20s, and they know they have lives to lead. They're young and playful; like I said about the photos, their eyes are bright. But they're adults who are fresh, not children who have grown longer arms and legs and greater money needs.

Or maybe Middle Eastern kids aren't like that. It isn't something I can settle. But I've met some who were, students when I was a volunteer teaching English. Didn't know them well, but I thought of them when I looked at the photos. I remember a pretty college girl with a husband, and how teaching her had made me think about people who get launched on life.

I saw that photo again, the one from the news story. The three of them. I looked at the scarves and the kids' skin, its color, and I thought about how different they seemed from the way people normally look (yes, that's how my mind works, I know), and how at the same time they seemed the way people ought to be. Meaning bright and happy, and firm of spirit, and equipped to spend the next five or six or seven decades flourishing instead of waiting to die.

So I had my moment when I barked and cried, and the rest of the day I couldn't figure out the reason. I'm just older now, I guess, and I have some idea of what a life is. They were ready to live theirs, and now they won't. That's what I thought on this particular day of sitting by myself with the Internet.