The Young and Sort of Restless

A sociological visit with the next generation of American leaders and misfits. 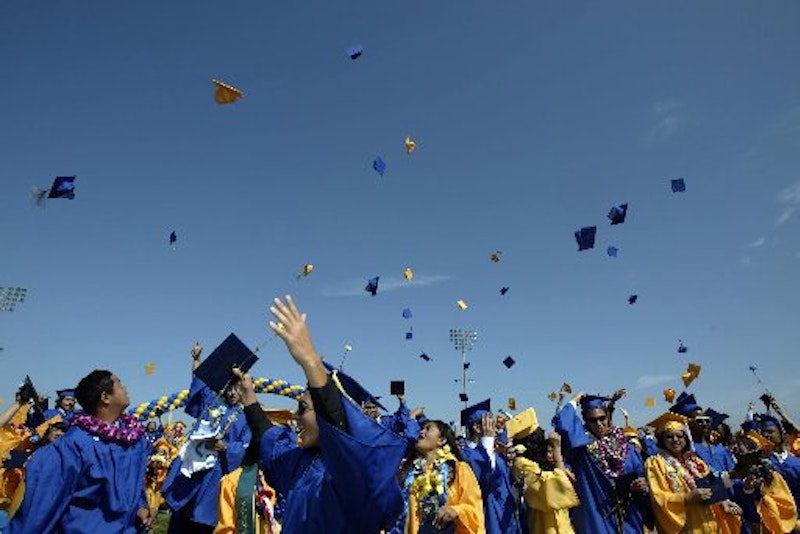 How many times can a bright but naïve 18-year-old say the words “awesome” and “meta” in the course of a 10-minute high school graduation address? I lost count about four minutes in, sufficiently irritated, if bemused, and instead bugged my son Booker to check his iPhone for the latest score of the Red Sox/Yankees game on June 7, a key square-off between the A.L. East rivals that I was missing to attend my older son Nicky’s grand ceremony—the 12th grade boys were rather royally garbed in white tux coats with buttoniers, the gals in fancy dresses—that was oddly held at 7:30 p.m.

Not that this account even rubs shoulders with a complaint: it’s not every day that you’re assembled in a well-behaved crowd (although it’s inexplicable to me that fewer than 50 percent of the men took the trouble to knot a tie for the affair), with a lot of good-natured hot air, graduates smiling from ear to ear, waiting for the moment that your child’s name is called out and he or she receives a leather-bound diploma from the stern headmaster. The evening was quite warm, but still, human nature sometimes astounds me: upon lining up for seats, all guests were offered a fan (with the students’ names printed on the back), and I’d guess that nearly all of the spectators immediately start waving the cardboard air-conditioners around, just because that’s what they were supposed to do.

I passed on the fan ritual, but wasn’t so different from the other parents, as I attempted, in vain, to freeze-frame my son at the podium with a digital camera. Given about five seconds to capture the moment, I muffed it, which just further ingrained my cranky notion that the old snap & click cameras were the tops. You took the picture and got it developed; if it was a successful effort, sometime in the future it’d be enclosed in a frame, an album or tacked on the wall. No such luck today: granted, I’m on the wrong side of the digital revolution, by accident of birth, thank you, but I’ve got about 400 photos stored that haven’t been downloaded, uploaded, sideloaded, overloaded or printed.

It occurred to me a few weeks before the date that I’d never attended a high school graduation—not my own (during senior year, marooned in Lawrence, New Jersey, I went to my job at Princeton University’s biology lab, feeding rats rather than extending for even two hours my experience at a redneck high school), or any of my brothers’—so I was looking forward to Nicky’s milestone. There was much to commend the proceedings: the Chesapeake Brass Quintet playing traditional tunes, several interludes of silent prayer (it’s a Quaker school) and the infectious whooping and hollering from a large family next to us when their relatives’s name was called. (Have to admit, I was tempted to snip off the ponytail of the 50ish guy who was seated directly in front of me.) A relatively short speech from a faculty member, who was leaving this particular job for London’s American School, was at times requisitely corny but also poignant and heartfelt.

I was slightly taken aback when the other student speaker—they were co-presidents of the senior class—in the midst of uplifting, if predictable, remarks about his generation’s responsibility to protect the environment (that theme must’ve been echoed across the country thousands of times in the last two weeks) and dig the country out of hard times, slipped into a weird segue. He said, “To quote a classic line from a television show…” and I nearly fell off my chair. I’d expected a snippet of Yeats, Wordsworth or even David Foster Wallace,” but as one of my sons pointed out later, with a shrug, “Kids don’t read much these days.”

He also indulged in hyperbole, lamenting that his generation faces a world far more onerous and challenging than perhaps any other graduating class in the school’s history. Granted, jobs are scarce, the economy can’t shake its schneid, and college tuition bills are out of control, but this trope really was like trying to sneak a sunrise past a rooster. I’d wager that young men and women reaching adulthood during the Great Depression, World War II and the Vietnam era, when the draft was a terrifying Sword of Damocles, would beg to differ. Nevertheless, this fellow carried off his speech with aplomb, not an easy task for a youngster in front of his peers and a sizable audience.

During one dull moment, I recalled the Huntington High School graduation in 1972—I’d attended that school through 11th grade, but as noted above had moved to New Jersey by that time—about which I received telephone reports that the valedictorian, John Pierson, caused a ruckus during his own remarks by tossing his cap and gown into the crowd and launched into a tirade about the wastefulness of such a ceremony when, after all, babies were starving in Biafra. A number of students, in a joyous demonstration of Power to The People/Right On! Solidarity, joined young Mr. Pierson (who went on to Yale, dropped out after a semester, and in the years since has had a successful career in film and writing), to the extreme consternation of most of the parents. Had such a disturbance occurred at Nicky’s graduation, it would’ve been pretty cool, I think—nothing wrong with ginning up an orchestrated tradition—but perhaps that’s just the enthusiasm of an aging Baby Boomer.

As it happened, we returned home in time to see the Sox pummel the Yanks, and when Nicky got back he was in high spirits, so it was indeed a swell evening. I took a snapshot of the graduate with my wife—both beaming—and with luck, it won’t remain in the camera.