The Art of Destroying a Heckler 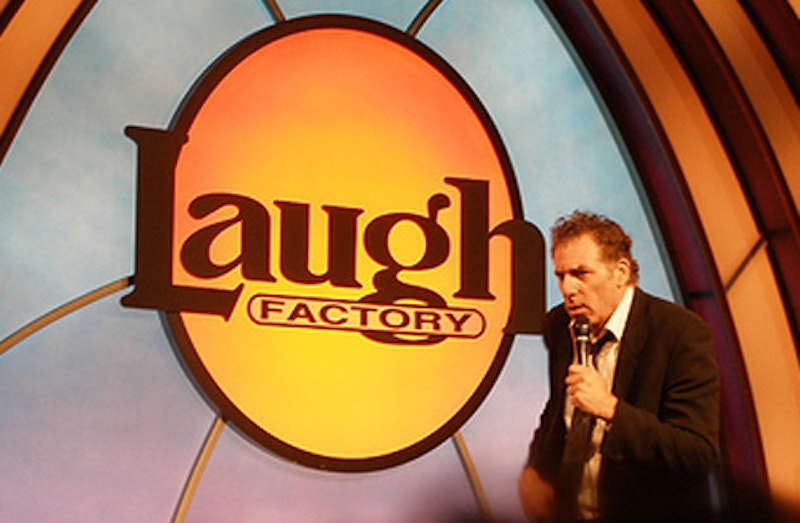 Hilarity ensues when a drunk college student heckles a seasoned comedian at The Laugh Factory in Los Angeles.

Every few years I leave the house for a night on the town, and usually I find myself in a comedy club. On this occasion I was in Los Angeles and the club was the Laugh Factory. And there was a heckler! You hear about the romance of comedy clubs, and usually it involves the sheer crumminess of working there: shitty pay, crowds that don’t laugh, the car trip or plane ride to the next town, the hostile jerk who wants to louse up your act. But these hostile jerks have only been legend to me. Once, in Montreal, a timid Canadian tried to torpedo Dom Irrera and then changed his mind in mid-outburst. He actually said, “Uh, never mind” before falling silent. Irrera turned to a woman in the front row. “No, m’am,” he said, almost tenderly. “That’s not a heckler. That’s a retard.” Then, with a hint of sternness: “Don’t be mean to the hecklers. You gotta be fair.”

Apparently a drunk girl in Los Angeles is tougher going. This was well past midnight on a Saturday, and the show had started hours before. My head was starting to list, but the fellow up on stage was 30 and had a young man’s energy. He’d made fun of three guys in the front row for being named Bo, Tucker and Wyley, made fun of another guy for being seven feet tall (this fellow had received a lot of attention during the evening) and made fun of the Catholic liturgy for not suiting his sense of the probable. That last bit had gone on a while.

“Wheee-uh!” That’s the best I can render it. A girl had let out the piercing whistle that drunk girls let out when they want to show they’re in high spirits. She was up in the balcony, which wasn’t high up at all but still out of sight for someone, like myself, seated down near the microphone. “Yeah, we hear you, honey,” the comic said. “Wheee-uh!” the girl said, and people laughed.

The comic said she put him in mind of the kid in fifth grade who figured out one annoying thing to do and then wouldn’t stop. “Come to think of it, I was that kid,” he said, and he told us how he would let out a high-pitched whine without moving his lips and would then mime confusion when people looked his way.

Maybe that hint of fellow feeling encouraged the girl. “Wheeee-uh!” she said. “Yeah, all right,” the comic said. He was a big fellow, broad-shouldered, but with glasses and shaggy hair, like a geek’s head had been planted atop him. “You know, you can stop now, all right? Nobody’s asking you to keep going.” He was looking straight up to where she was sitting, apparently in the middle of the balcony row. “Wheee-uh!” “You’re just being an asshole, okay? Nobody’s laughing now.” Which was true. “You’re just producing a lot of crap for the people who are here.”

“You’re just generating crap for everyone else. Look, the two guys who are with you. I just called you an asshole and they applauded. The guys who are with you. So what does that say?” “Wheee-uh!” The exchange continued a bit longer. The girl, laying down a trump card, said she went to USC and was good at math. “Yeah?” the comedian said. “Because, really, you seem like someone who isn’t educated.”

“You know,” the comic said, “you should go around with a dick for one day. Try this shit if you had a dick instead of a vagina. You would get the shit kicked out of you. That’s what it comes down to. Try doing this shit with a dick and see what happens to you.” The girl said she’d rather have a vagina than a little dick. This fired the comedian up. “Yeah,” he said vengefully. “But you’ve had a lot of little dicks inside you.” Big laughs, in part because everyone was on his side. “All right?” he said, voice up. “That’s what happens. Because this is what we do here, okay? You want to try it? You can’t. I don’t go to school. I work at the Laugh Factory.” Stepping back, he drew his finger along the club’s logo, which loomed up behind him. “The—Laugh—Factory. We … produce … laughs. That’s what we do. All you produce is blood and a bad time.”

Explosion. It was one of the biggest laughs of the evening. From the balcony: “Wheee-uh!” The comedian stared. “I just destroyed you,” he said. “You don’t even get that I destroyed you.”

But the night was almost done. When the geek-headed comedian went off, he was succeeded by a dapper, white-haired gentleman who specialized in rat-a-tat comedy and was quite good at it. (“George Bush is a greeter at Walmart. What are his first words? … ‘Welcome to Kmart.’”) But the gentleman was there to close out the proceedings. “For my first act I need a third of the audience to disappear,” he said, and we did.

Before I left, I climbed the stairs to the balcony and took a look. There the girl was, sitting front and center. Only one of her fellows was left, and they had a lot of empty chairs on either side of them. The girl looked college-age and had black hair and glossy olive skin. Her face and arms were thick, and I suspected she had quite an anchor. She was smiling to herself, quite happy. The fellow, who was dark and rather slight, noticed my eyes on them. He flinched, and out of human feeling I looked away. As I left, I reflected that being single isn’t always so bad. It’s a thought I sometimes have.