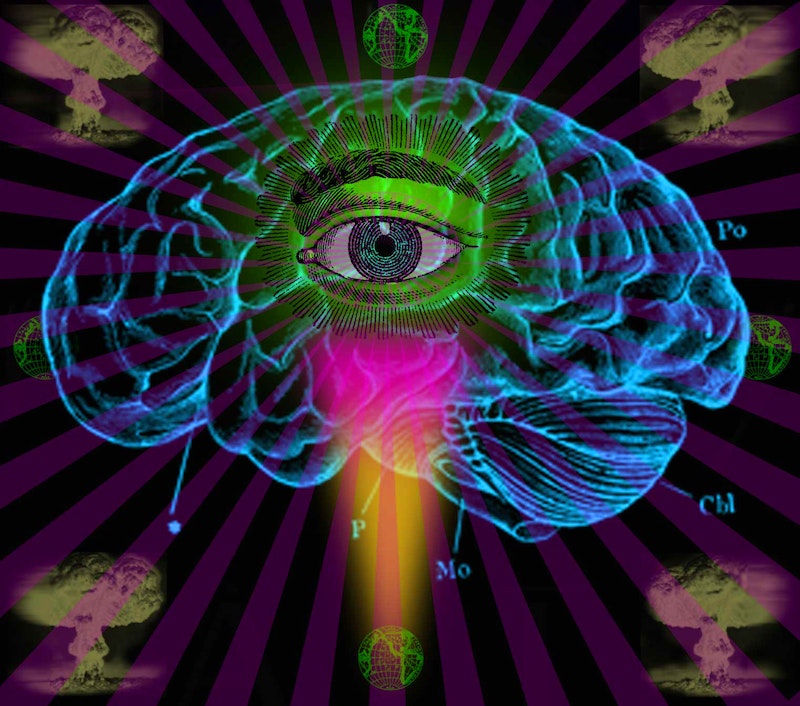 We all know alternative lifestyles exploded during the 1960s. One poignant voice of the Love Generation was novelist Richard Brautigan. His novel In Watermelon Sugar sees a futuristic communal setting, “Where the sun shines a different color everyday.” For those seeking life-changing experiences, Brautigan’s surreal visions filled a collective desire for a perfect world.

In a search for answers, we call upon our own third eye for a re-examination of past counterculture attempts. Depending on who’s talking, the reality we live in is, by all accounts on a precarious edge.

Why a counterculture reassessment now? One reason is fear. Corporations are in full-scale development of AI and autonomous weapons. Letting this complex issue evolve on its own without some kind of regulation is unconscionable.

Think about Elon Musk’s Neuralink and Kernal’s Bryan Johnson’s experiments with brain chips. They want to build a digital layer in the brain. That’s keeping Silicon Valley busy writing neural codes for specific functions. It’d be easy to create an insidious individual with a neuroprosthetic brain implant using that kind of biological interference.

Will outer space provide an escape from civilization? Let’s hitch a ride with Jeff Bezos. He’s pioneering space tourism with a private flight company called Blue Origin. It’ll be a “thing.” Imagine, chartered tours transporting us into the cosmos and seeing the famous Apollo 8 EarthRise shot live. You can be sure Blue Origin, Amazon, Google and Apple have other “things” planned.

Meanwhile, did anyone notice the big mushroom cloud? A series of worldwide bomb droppings has us emerging from our panic room dusting-off blast ashes. Robots clean up radioactive street fallout.

What if two AI bots had a lovers spat?

Nervous yet? Think about the concerns over these recent innovations: artificial chromosomes, genetic engineering babies on spec, Facebook’s scary “Portal” ecosystem for your home, robot farms and so on. There’s even a rogue biochemist live streaming using Crispr. The bio-hacker uses a homemade approach to altering body cells with a do-it-yourself gene-editing tool. Order yours today. Pharmaceutical companies will definitely want to sell kits. All questions will be referred to an ethics committee.

The narratives for a disaster in the making are countless. One possible existence in the future (if you’re into collective living arrangements) is a commune.

The word “commune” means a large gathering of people sharing a common life. Communes allow people to step away from society while appealing to others of common religious, political, and economic values. During the 19th century, French theorist Charles Fourier’s philosophy “utopian socialism” helped shape commune development. A lot of Fourier’s ideas are bunk. One problem with these kinds of collectives is they get lost in their own self-importance with a focus on excessive happiness.

That didn’t stop George Ripley’s Christian living utopian experiment; Brook Farm in West Roxbury, Massachusetts. It was one of at least 80 other communities spread throughout the US during 1840s. Brook Farm’s own “transcendentalism” concept suggested society corrupts the purity of the individual, stressing independent people are best when connecting with nature. Brook Farm cultivated an appreciation for the arts with support from Nathaniel Hawthorne and Ralph Waldo Emerson. But the dream met overwhelming difficulties, including a large barn fire, small pox and financial problems. It petered out around 1846.

John Humphrey Noyes was another man guided by the Bible. The perfectionist preacher founded the Oneida community in New York during 1848. Oneida was different because of the practice of “free love.” The group’s complex marriage arrangements proved controversial and often subject to criticism, both from within and outside the community. The religious sect had several locations in New Jersey, Connecticut, and Vermont. But Noyes eventually fled to Canada to escape statutory rape charges. Reorganized in 1879, Oneida saw the future in spoons and went on become one of the world’s largest silverware companies.

However, California’s desert proved too extreme an environment for Harriman’s autocratic social experiment. In the midst of limited water access and mismanagement, the grandiose idea of Llano del Rio quickly deteriorated. Surrounding farm neighbors despised the community and couldn’t wait to destroy it. The short-lived experiment ended in 1917.

Along with the commune renaissance, another widespread phenomenon developed in the 1970s known as the “New Age” movement. New Age spirituality and lifestyle covers a diverse and esoteric range of subjects that focus on transforming the “self.” Selling wellness offers a brand for hungry consumers with a large appetite for self-reflection. Notice the New Age influence next time you’re in a yoga class or shopping at Whole Foods.

Kurt Andersen’s Fantasyland: How America Went Haywire distills America’s strange relationship with the occult, religion and show business. In particular, Andersen points to The Esalen Institute in Big Sur, California. Esalen invites you to an ancient ground to, “open new horizons by pioneering deep change in self & society.”

Recently, Silicon Valley took a break from pushing our dopamine input. The tech brethren felt a little need for some soul-searching at Esalen seminars. Young bucks are taught personal growth by taking responsibility for their actions in workshops labeled, “Consciousness Hacking: Meditation + Technology.”

Stanford professor Fred Turner is the leading authority on the subject of counterculture influence in the tech community. In an interview on the website LOGIC, Turner talks about “techno utopianism” indicating, “Apple is, in some ways, very cynical. It markets utopian ideas all the time.”

For a closing feel-good, Skeeter Davis’ classic “The End of the World” plays as our soundtrack.

There’s great danger in today’s “attack to destroy” attitude. Technology keeps us safe, but it can also kill if done effectively. Elon Musk, Stephen Hawking and others recently issued a warning to the UN raising awareness about AI and autonomous weapon use. Our current options for leaving the planet Earth: zero. Let’s consider a hopeful vision for our future that involves world dialogue and employs a humanitarian approach to the challenges of technology.

Are utopias the answer? Probably not, they tend to fall apart. In the meantime, back to our progressing apprehension of the future, it’s business as usual.