Connecting in the smartphone era. 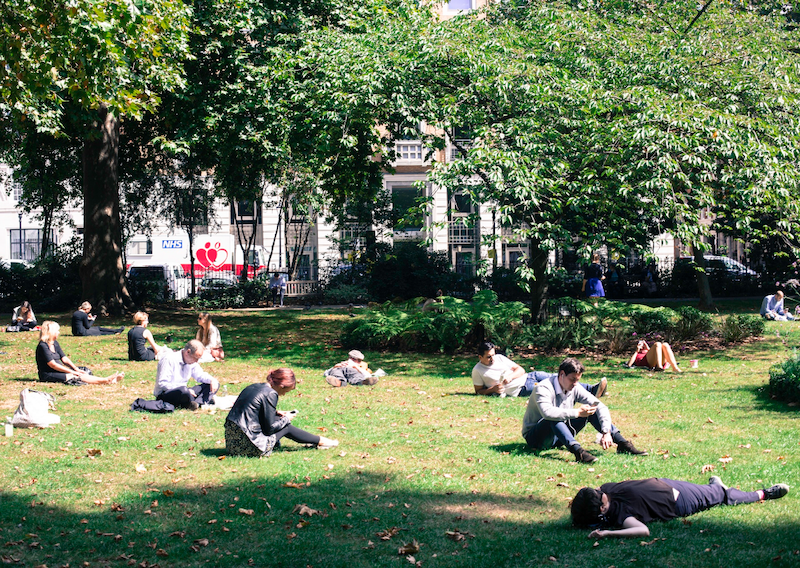 I walk uphill to the park, with the dogs and my daughter. Seven months old, in her stroller, the reversible seat facing me. My partner and lovely lady chose this stroller and it’s proven to be a great choice. With thick rubber back wheels, and smaller, flexible front wheels, the stroller is up to the challenge of the many inclines, declines, potholes, and cracked sidewalks of our neighborhood. Initially, I figured the stroller would be facing out, our baby given the chance to search the landscape for clues about what to expect on this Earth. Trees, breeze, grass, sunshine, birds, and even other humans and dogs wandering around. The choice to have the baby facing you as you venture out into the open air is interesting. Your baby gets to know you a little better, and you get to watch your baby as she takes in the world. You see when she starts to fall into a comfy sleep. When her eyes start to get relaxed, less focused, gazing out instead of inspecting.

We live close to a small park. We pass the enclosed basketball court, used for young children to ride their bikes around while adults sometimes ride bigger bikes, trying to keep some momentum without actually going anywhere. I see adults staring down at their phones or having conversations while their kids ride around. Sometimes, I'll see a group of adults with a group of kids. There are fathers who come here to play hoops with their kids. There was one obese family, a mom and two pre-teen children who came for the purpose of walking laps. This is a public park. I've shot baskets at these hoops, but less often than I expected when we moved to the neighborhood three years ago. Now, as the stroller passes by the empty court, I see a flickering image of this baby girl as a seven-year-old. I'm showing this future girl how to use her knees to shoot from further out. I'm showing her how to dribble with her head up, always looking up for teammates and defenders.

Now we're past the court and heading to the playground area. There are plastic playthings on the side. There’s a guy my age, hoodie up, legs outstretched, sitting on the cement block of the edge. I don't see a child at first. The slide and the little winding fort are empty. Further on, maybe 10 feet ahead, I spot her. She’s maybe three. Playing by herself. Some kind of plastic kitchen set. The dogs stop and sniff. I stop. As I pass by, he nods at me. Then back to his phone. I wonder if he's going to interact with his daughter. We walk further up to the grassy area, a small square patch, with some brush bordering a small creek. I look back toward the playground. It's been a few minutes. He hasn't moved. But now he's angling his phone and taking a picture of his daughter, who has moved from the kitchen thing to a little plastic car. She's not paying him any attention. He's taking a picture of her back as she's sitting in the car.

I’m terrified of this future where parents often leave their children without attention or connection, or who connect through taking a picture, watching their babies grow up with a self-inflicted barrier, through which they share. And yet, I send pictures of our smiling baby, with mushy orange pumpkin surrounding her smile. I’m not terrified of the phone when I’m using it to send these pictures to family and friends. It's when I see how it keeps people from interacting in daily life. It's when I wonder about an entire generation of infants and toddlers who will sit quietly in a classroom, because they aren't interested in the other humans around them, or the ones who won’t notice when the depressed, disconnected, ignored child at the back of the room starts scheming on ways to finally get noticed.

We have little awareness of ourselves as humans, stumbling around. We’re obsessed with these things, because they replicate connection. Beeps and buzzes of words, now replaced by symbols. Emoji takeovers. We’re in love with the concept of futurism, and ignorant of our present. Or maybe that’s unfair. Maybe we’re just preoccupied with distraction. Maybe we’re searching for some way to stop thinking about danger. The climate. The President. The future. So we look down instead.