The Virtues of Paris vs. the Threat of Gay Influence 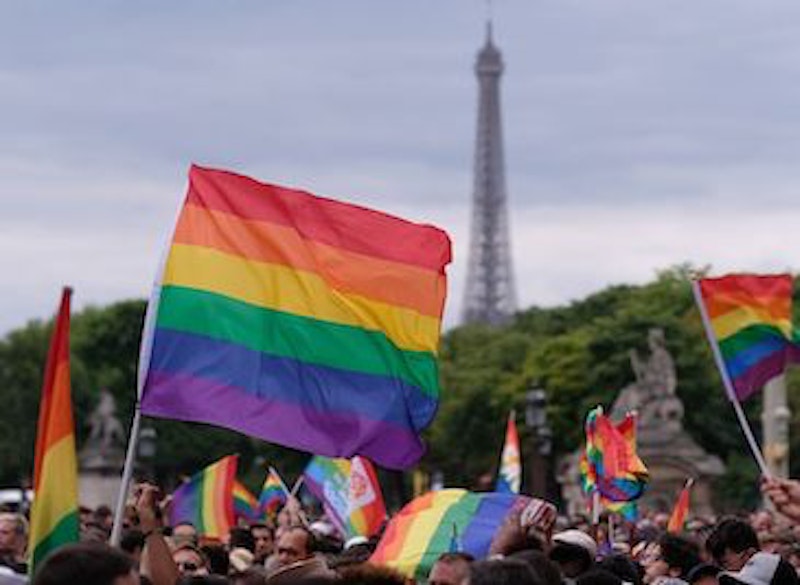 A happy coincidence. Friday saw the publication of my last week’s diary entry about the supernatural influences that have driven anti-Russian disobedience among the Balts, the Little Russians, the Georgians and the other lesser peoples of the Holy Kremlin’s former empire.

And not two days later, at Sunday mass, Father Nicodemus dedicated his sermon to much the same topic. What a learned—and theologically sound—disquisition Father Nicodemus delivered. It touched nimbly on the tradition of witchcraft in the Jewish Pale of Settlement throughout the later years of the reign of the sainted Romanovs, on that black art’s translation to the ghettos of our New World cities at the inception of the imperial-Zionist “American Century,” and on the secret role it’s played in driving the events of modernity, broadly speaking—from the American entrance into World War I to 2008’s Georgian military aggression against the Russian Federation, to the generous funding accorded the anti-Russian-racists of the Atlantic Council.

Afterwards, having accepted communion, we dozen-strong parishioners of our little Russian Orthodox Church left our little sanctuary and dispersed—fortified more than usual, it seemed to me, by our contemplation of His redemptive sacrifice, and ready to move on to the good Christian work of the coming week.

The situation as concerns Daughter’s potential summer trip remains an issue. As I wrote a couple of weeks ago, Daughter has requested a sum sufficient to let her spend her summer vacation in Paris, with a boarding school friend of hers. This friend’s father lives there, and the girls would lodge at his apartment on the Right Bank, in the Marais district. He is, however, a homosexual—now married to a man, his marriage to the girlfriend’s mother having run aground on the shoals. no doubt, of his disordered sexuality.

It’s a measure of my Francophilia, and of my conviction that familiarity with Paris—of France in general—is crucial to the education of the young, that I’m entertaining Daughter’s request at all. Mother is dead-set against it, I should point out. So is Father Nicodemus.

On the other hand, Brother Gavin, my partner in the little Benedict Option community we’ve established here in Indiana, has been a surprisingly liberal influence in my debate with myself.

“Why not let her go?” he asked me with disarming frankness one morning as we “crossed streams” in our communal outhouse, having both woken up at the same time. “What are you afraid of?”

It’s a good question, and I’ve been taking it seriously. What am I afraid of?

I’m willing to admit that the science as pertains to homosexual influence and subversion is not as “cut and dried” as many of my fellow traditionalist Christians would like to think. As a typical Midwestern youth, I participated in a variety of the male bonding rituals that were so popular in the “youth culture” of the 1970s and that sometimes necessitated various levels of nudity—harmless exercises in boyish japery like slumber-party cross-dressing, locker-room fondling, explorations in treehouses, etc. As an Eagle Scout during my college years I swam in creeks with the greenhorns and Cub Scouts entrusted to my care during camping trips to Turkey Run State Park. And of course on my trip last year to Istanbul I made a point of visiting the bathhouses—the storied hammams, with their associations with male eroticism—of that great city on the Bosporus. None of this, needless to say, tempted me even to dabble in homosexuality, much less convert to it as a “lifestyle practitioner.”

But if I personally have never been tempted towards homosexuality, it’s also the case that Daughter is a different person than me, and there’s no telling what deep psychic chords the presence of her friend’s homosexual father might stir in her—with fateful effect.

And yet… Paris. Yes, and France in general. I’m reminded of that lovely comment by the fine Jewish writer Adam Gopnik to the effect that Paris lends us a “sense of serious happiness, of pleasure allied to education.” Yes, that’s just it. Gopnik is right, and I’d like Daughter to profit from that serious happiness, that special variety of education.

And yet do I dare? There are moments when I curse myself for my timidity in this question. Then I remember that Daughter’s soul isn’t mine, and that I have no right to gamble with it.

In short, my debate with myself continues.