Canada has me now. 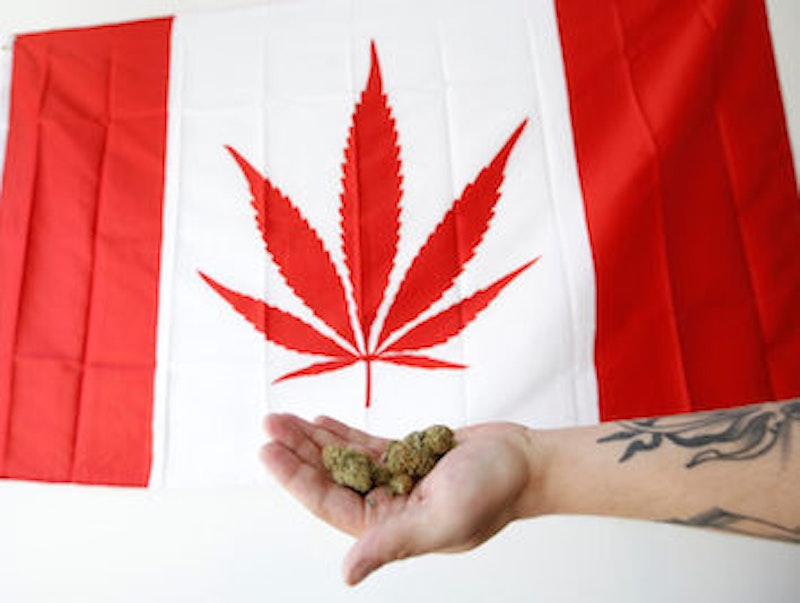 I think he liked me more than I liked him. He was certainly generous with the portions. Chunks of kryptonite would form a midget sand castle on my desk. “Look at that,” he’d command. I’d reach to smell. “Don’t smell it,” he’d say, offended somehow. “Look at it.” And I did look. The chunks glittered; they were frosted. Good stuff, I’d say, though I don’t focus much on differences between different highs. At any rate, the mini–sand castle would be a heap, a spill, and on investigation it smelled fine. “You’ve always been 100 percent excellent,” I said on my voice message, because one wants to acknowledge.

He was 26, a skinny kid. He paid half his girlfriend’s rent, and he’d lose his cell phone. He did it twice last summer, and he spent $400 or so playing some computer games they have at bars. A few months before, in the spring, his cell had been dying for mysterious reasons, maybe the battery. I’d texted him in the evening, and his schedule fell out that he came by late, after one a.m. The girlfriend with the half-rent was giving him a hard time. They were to meet at her apartment and then go on to something somewhere else—this was a late-night life that I was glimpsing. In the meantime she had to set him straight about a matter that didn’t come clear to me. But his cell was busted, so he had to borrow mine, and on this device the setting-straight was administered. At one point she hung up, which stung his sense of good form. “Borrowed phone,” he said urgently when he got her back on the line.

I sat out the girlfriend incident, watching the show while parked in my desk chair. Episode over, he shook his head at me and I said “Man!” or “But it’s good to have one.” No big thoughts. But from then on Jason knew me. I’m not sure why his attitude changed. Maybe it’s because I said nothing pissy. My chief memory of him early on was that he was tall and thin—like a straw—and also quite peremptory. For his first delivery, he ordered me on a walk: out the front door, around the corner, and up the sidewalk, and then he unbent to do some business. Lobby cameras were his fear. Learning from me that we had known, he consented to let future exchanges take place indoors. I saw him often enough over the next six months or so, and then came the incident with his girlfriend and the cell.

That night, business done, Jason flapped his hand out into the space between us, the mid-air between him and me. “Oh man, I can’t do that shit,” I protested, being a terminal klutz—honestly, I can’t do those handshakes. Looking back, “shit” could’ve been a misstep. But Jason didn’t mind. I guess my bleat was from the heart and he could tell. Way up there he smiled and then laughed, his face looking as if it had been wafted off-balance.

We knew each other another 10 months. I smoke my share, so I saw him often enough. When he appeared at the door, I’d catch sight of his white eyes against his dark skin, and he’d grin at me. I’d pull the door hard, since it’s a heavy mother, and he’d slide in, standing edgewise for some reason. Typically we’d give the handshake a try. “No, come on,” he’d say. “No, come on” and his hand would float toward mine. I’d manage it, like a novice hitting his first golf ball. Wobbly, but the motion went through. Of course, this handshake was simple. Palm approached and then contacted palm, with the two dragging across each other so as to pull apart. Having pulled apart, each hand would contribute its touch of style. In practice this meant that Jason would do a finger gun with an accompanying “pyouu-oum” sound, that being the gunshot. “Oh man, now this,” I’d say since I wanted my handshake challenge to be over. “Naw, man,” Jason said. “That’s a good way to do it.”

Sometimes he’d stay for a chat, sometimes not. The chats were just a few minutes. He told me he was 26 and a student, though I don’t know of what. I’d hear about the girlfriend and the lost cells. One time I asked him who was on his t-shirt. He paused. Looking resigned, pained even, he said, “A dead rapper.” This caused me to protest. “I might know!” I said. Jason told me and I started laughing because I didn’t know. Sometimes people have a moment when they fall laughing together. This was Jason’s and my moment. I suppose it was the highpoint of the relationship.

That was the summer sometime. In October pot became legal in Canada. The catch: you have to buy it from the government. As the news stories sank in, I started to hope that Jason had just dropped out of the business. But no. When I came back to town in January, I found all the messages he’d sent me, one announcement after another of Purple Cloud or Backward Lake.

I called a legal clinic at the nearby university. Were buyers breaking the law too, or just the sellers? That very afternoon I received a call back from a mild-voiced law student. “It was pretty easy to research,” he said. “The law’s straightforward.” If you bought from anyone but the government, you were breaking the law. “Five thousand dollars for the first infraction,” he said. “For repeat offenses, up to $500,000.”

A few days later I walked out of a drugstore and Jason swung into view. He was headed I don’t know where. First, I looked to see if it was him, and then I caught his eye. This was a bad choice on my part. But I was afraid. He might’ve seen me, and if I pressed on it would look like a snub. One hates to see oneself as a shunner of associates turned inconvenient.

“Hey,” he said. I said hi. “Get in touch,” he said, and I nodded to show that I understood. Three women were hurrying by, and I shrank from a conversation in front of them.

I received a text from him an hour later. He was offering to come by my place and sell. If only I hadn’t caught his eye. But now I had to do the necessary. I called his cell and was relieved to get voicemail. I told him about his being 100 percent excellent and about wanting to pay him respect. But Jason didn’t listen to the message. He just saw it was there and called me, hoping to make a delivery. I think he might’ve been hurting for business.

“I’m better!” he told me. I told him I knew he was, it was just that the government might get us both. Money’s involved now. This time the government’s going to mean it because we’d be screwing them on revenue. “Naw, it’s Indian cigarettes,” he said. He meant that people on Indian reservations sell cigarettes without caring about federal law. But federal law doesn’t apply to the reservations, and it does apply everywhere else.

But that’s a thought I had in retrospect. At the time I was shaken. “If I’m wrong,” I said, “I’ll come crawling back.” I repeated this. And then came the end of our conversation, as given up above.