The Unbearable Bleakness of Being

Selected Tweets by Mira Gonzalez and Tao Lin is a diary of our age. 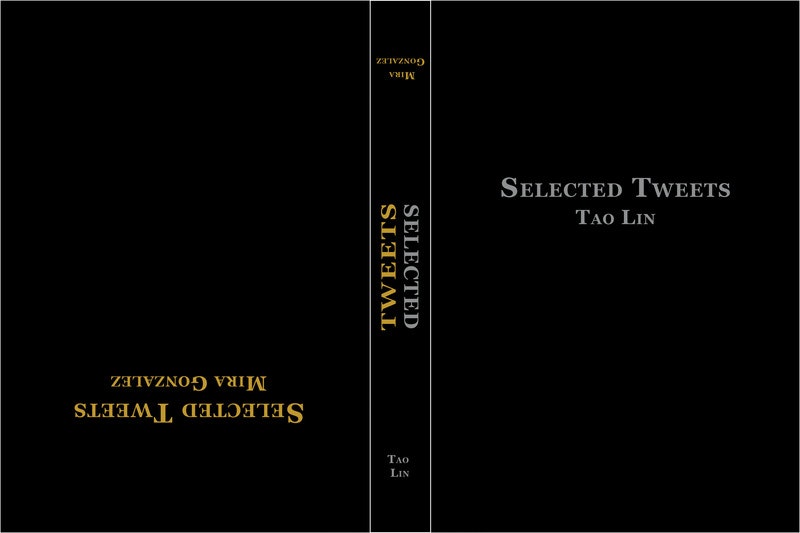 Twitter has approximately 235 million active users. Facebook has approximately 1.35 billion active users. They’re almost always mentioned in the same breath, along with Instagram (300 million), despite Zuckerberg being a billion stronger. Twitter remains weirder and wider because they haven’t been forced to ditch their idiosyncratic format. There’s been a bit of pressure since they became a public company to make the site easier to understand for beginners, but it hasn’t shown up. I’ve been using Twitter for five years, and I can’t remember when it changed the way I thought. Around 2010, everyone, their dog and grandma’s toad were on Facebook, so you couldn’t act like an asshole anymore. It was your own age group; in high school, it was a quad, it was a locker room. Facebook was never personal—paraphrasing Dan Deacon, MySpace was like hanging out in someone’s room, and Facebook is like meeting up every day at the mall food court with everyone you know from every sphere of your life. Facebook’s clean, uniform look was refreshing at first, but it’s felt like a government or company registry for years, especially now that you’re required to upload photo ID to prove your name is real.

Twitter is still confusing to people who don’t tweet, and users are less inhibited. I doubt Justine Sacco would’ve typed what she did as a status update. Throughout Selected Tweets, Mira Gonzalez and Tao Lin catalogue their depression, drug use, sex lives, and painful and alienating interactions with the outside world, partners, and families. To non-users, Twitter seems as diminutive and dumb as its name, but Selected Tweets is presented as a diary, 400 pages of tweets by both Gonzalez and Lin that span several years over multiple accounts that become more and more unedited and spontaneous and alarming (Gonzalez’s section is dedicated to her mother, “who receives a seemingly infinite amount of phone calls from extended family members who are concerned about me because of my tweets”). Despite worrying their parents and sometimes thinking about it, this collection is blunt, bleak and brutally honest about their behavior, down to the milligram.

These tweets might be carefully curated to feel cohesive, but Gonzalez and Lin sound like two sides of the same brain, with constant refrains about how “Being alive seems dangerous (via ~100% chance of death).” Lin asks for asteroids and comets to make deep impact with his apartment, and Gonzalez can’t deal with enduring her own existence (“‘Living’ is just the longest and most painful form of suicide”). They’re both alien observers, with Lin a little more distant, with far fewer interactions with people. Some of Gonzalez’s best tweets are about her family members, like “My step dad pointed at my bagel in the toaster and said ‘is that the toasting thing?’” and “during dinner my dad said ‘is he gonna impregnate you soon?’ and ‘you don’t eat enough’ and ‘do LSD instead of cocaine’ and ‘what’s wrong with your hair?’” If you’ve followed either for a couple years, you’ll recognize a lot of these entries, but rarely do you ever scroll years down a person’s timeline, and Selected Tweets is a nice diary of our age, of two materially comfortable but morbidly depressed, drug addled, and existentially fucked people whistling past the graveyard every day.