Happy Birthday to My Best Friend 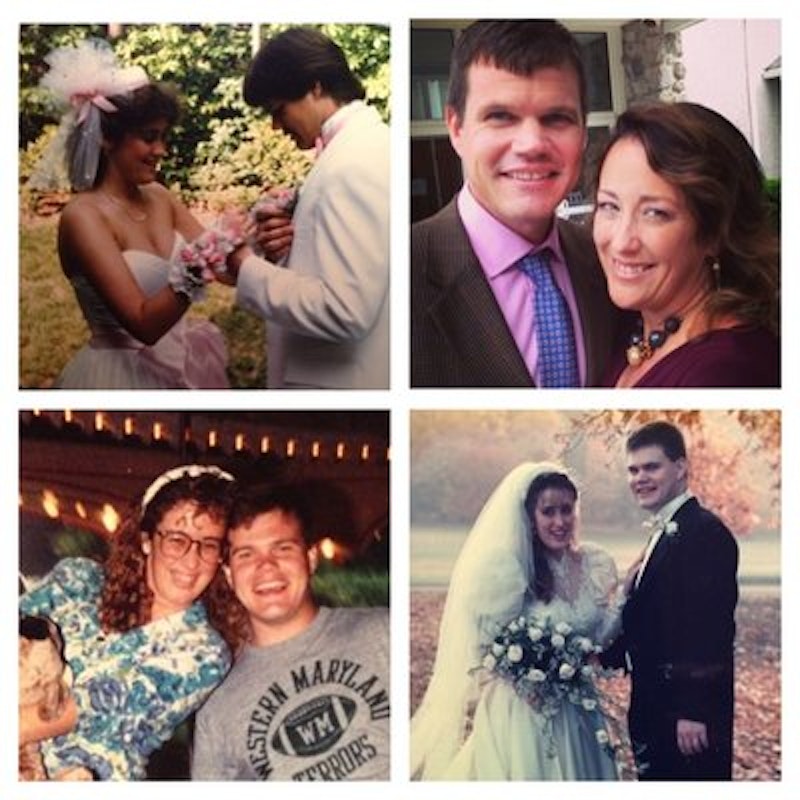 Thirty years ago, in June of 1985, I had a babysitting job in Ocean City, Maryland, where as a Jersey-born, Philly-bred girl, I'd never been. A couple named Bob and Mary had hired me as a "mother's helper" to watch their two kids on their family vacation so they could go out and do whatever it was adults did without their kids. I didn't know much about it—I'd just turned 16 and was happy to have passed my drivers license exam on the second try, thrilled to be making $100 for the whole week.

The condo building had an interior miniature golf course and on this night, the kids had accidentally left their golf balls 10 floors down in the spot. After they went to bed, I told my employers I wanted to run down and grab those before they went missing. As the elevator doors opened, a handsome guy about my age stood there watching the indicator lights. His shocking blue eyes met mine. I smiled, and turned toward the miniature golf room, noticing that he didn't get on the elevator.

I retrieved the balls and returned to the elevator, watching the indicator lights above the doors next to hot-guy, no one else was around on the activity floor that had closed for the night. Ever the flirt, I sarcastically said something like, "So do you always come here just to watch the elevator lights blinking?" He seemed shy, explaining that he and his friend had been returning to the condo when a girl who'd been chasing him was in pursuit and his friend had shooed him toward the elevators to lie low for a few minutes. He was waiting for his friend to come back.

I stepped onto the elevator, laughing, and said something mildly forward about maybe seeing him on the beach the next day. Alas, I did see him on the beach, along with the seven teenage girls he and his pal were staying with; apparently it was Senior Week for the Marylanders. He asked if I'd like to go to the boardwalk on my night off. I accepted. Afterwards, we proceeded to roll around in the sand making out until the bright lights of the sand-raking tractor came our way that night.

Today is his 47th birthday. That brief beach flirtation blossomed into the great love story of my life. That fall, after letters and phone calls and a visit or two, I visited his homecoming football game where he was a senior and the football captain. We went to every 80s dance and prom and homecoming dance at each of our schools together, and my senior year in Pennsylvania, I'd steal the car in the middle of the night, or the middle of the school day, and drive the three-plus hours to see him at Western Maryland College (now McDaniel), where he also played football. We both graduated from there, and got married six years after we'd met. Today, we have four kids together—our oldest, 21, writes for Splice and is a digital communications major at the University of Baltimore. Our 17-year old is the incoming high school drum major, our 12-year-old is the birding champion I've written about a few times and after those three girls, we had a son, now almost 10, and if you're a regular reader you know I've written about him and our mutual love for baseball a time or two.

I don't often write about my husband, and I don't think he minds. He's a very private guy, which is kind of funny for someone married to a girl who overshares her life on the Internet for a living. He's the most laid-back, patient person I've ever known and the best listener you could ever meet. He loves our kids with all his heart and though he's not very outward with emotions, they all know it as sure as they breathe.

It used to really bother me that I don't have a best girlfriend, because that was important to me in younger years, and I've had some close friends over the years. I hate cliques, so I always just wanted one woman friend I could count on for that companionship. I have a friend or two I'd love to call "best friend," but it's not sixth grade and I can't exactly go to the mall and buy two-part heart necklaces and propose the arrangement. But I realized something recently. I already have a best friend. My husband Bob (who, I'm not making this up, is often mistaken in person for Matt Damon) is the most perfect best friend I ever could've dreamed up. Our marriage has withstood some trying times, but we came through them stronger. Rough waters make great sailors. I know he’ll always be there for me, and I'm so thankful. Few people on this earth would tolerate my brand of crazy.

He's even sexier to me now after 30 years and four kids than he was on that fateful day in his OP shorts in Ocean City, because I know he has the best heart imaginable. What a lucky girl I've been to have a best friend and a life partner all in one. I'm happy we're going to be old people together.

He rarely reads my writing but I'll let him know this one's about him. Happy birthday, Bob.