The TERFs Strike Back

If womanhood is a costume to me, it doesn’t feel like one I can take off. 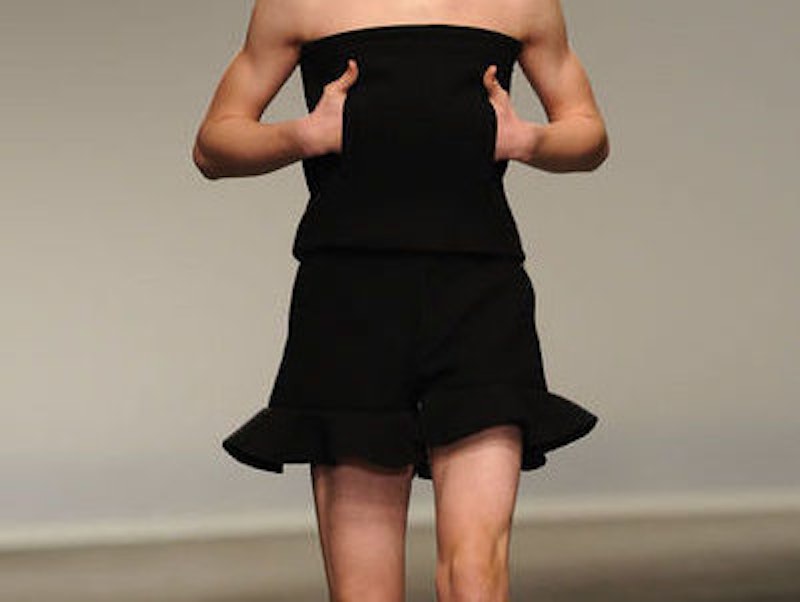 A few weeks back I was heading out the door, dressed and made-up to the tens so I’d look my best for an on-camera job. Unfortunately, I couldn’t even make it out of the building before getting misgendered; a construction worker in my path took it upon himself to call the person in full smoky-eye makeup, lipstick, blush, and a leopard print dress “he” for dubious reasons. I went to work fuming. Later, I wrote an essay getting all my feels off my chest. I needed to express my frustration at how, despite how much energy I put into fulfilling cisgender demands of beauty, it never really satisfies society as a whole: “No matter how well we pass for cis,” I wrote, “no matter how many sacrifices we make, no matter how much time we spend obsessing over our presentation–it will never, ever be enough.” It helped a little—but seeing the other trans girls re-blogging it on Tumblr expressing how they felt the same way all the time broke my heart a little. It’s tough out there.

The toughness of “out there” was reinforced the next day as I started getting the expected backlash from trans-exclusionary radical feminists (TERFs, to use the acronym they hate). “All I see in that picture is a man who went shopping in the women’s department,” sniffed one. “His [sic] insanely vain obsession with makeup and superficial ideas about gender roles is NOTHING society should EVER tolerate,” ranted another. I wasn’t sure whether I would rather believe they were trolling or earnest. Both options are bitterly depressing.

But what bothered me most wasn’t the further misgendering or the digs at my appearance (I get it, my eyebrows need waxing), but the fact that so many comments entirely missed the point of my post. A few days later, I got a message in my Tumblr inbox: “can a man not wear makeup or dresses or skirts? what is inherently womanly about those things? do you see womanhood as a costume?” I’m sure this was supposed to either be a cutting put-down on my intelligence, a plea for me to realize the foolishness of my “lifestyle,” or both, but it just came off as condescending garbage.

I’ve written before, and will again, about the newfound relationship I have with clothes and feminine presentation as a whole. To sum up, one way gender dysphoria can manifest (and does for me) is a sense that certain aspects of one’s body indelibly mark one as the wrong gender, and cause great distress. I feel this way about my Adam’s apple and body hair; others feel it directed at their genitals (whole or in part), bone structure, voice, etc. For some physical attributes, proper clothing and well-applied makeup can ease the pain of dysphoria: when I put on just the right amount of foundation, get my eye makeup just right, and throw on a dress that accentuates my hips and thighs (which are great), I feel a whole lot better about myself than I did when I got out of the shower an hour before, covered in stubble and shame.

In short, makeup and “girl clothes” don’t make me a woman, any more than I was “turned” trans by riding a girl neighbor’s bike too often when I was five. What they do is give me confidence, energy, and self-esteem—all of which are things I lacked prior to transitioning. When I take off my makeup at night and throw on my dad’s old Pulp Fiction tee as a pajama shirt, I’m no less trans or a girl, just like when I choose to go out without makeup (or with a bare minimum, because I really like lipstick). If womanhood is a costume to me, it doesn’t feel like one I can ever really take off—or at least, one that feels super itchy and bunched-up when I try to put on a “boy suit” over it.

The reverse is also true. When I wear lots of makeup and traditionally feminine attire, I’m not more a woman than before. But I am living up to standards of beauty that were set for me by cisgender society before I was even born. One of the re-blogged TERF quotes on my post read “it’s almost like being a woman has nothing to do with the clothes you are wearing,” and if you read the last paragraph, you’ll know I actually agree. But what that poster failed to understand is that, whenever a trans woman fails to wear “women’s clothing” or present in an otherwise sufficiently feminine way, she’s systematically denied her identity by those around her. That’s one reason the current “bathroom bill” debates are so concerning for non-passing trans-feminine people: it perpetuates the idea that one’s identity can be denied based solely on one’s adherence to gender norms. So when I spend over an hour getting my makeup, hair, and outfit just right, it isn’t just so I can be the prettiest princess (although I will accept that honor gladly). It’s to ensure that when I walk outside, I’m less likely to be verbally abused, physically assaulted—any of the horrible things that happen to trans women when our appearance draws the ire of those around us, who have been conditioned to hate us all their lives.

So to all the folks who have accused me of vanity, of shallow, obsequious devotion to outdated gender norms, I can only say: blame your culture, the one that categorizes trans women as either “stunning trap” or “man in a dress.” Blame cis pop culture, the ones who brought you Buffalo Bill and Ace Ventura’s post-trans kiss nausea. Blame Western patriarchal capitalism, which sells the same old notions of how to perform gender wrapped up in retrograde “liberated woman” rhetoric. But most of all, blame yourselves—for spectacularly, willfully, missing the point.