On the other side of Maryland’s Chesapeake Bay. 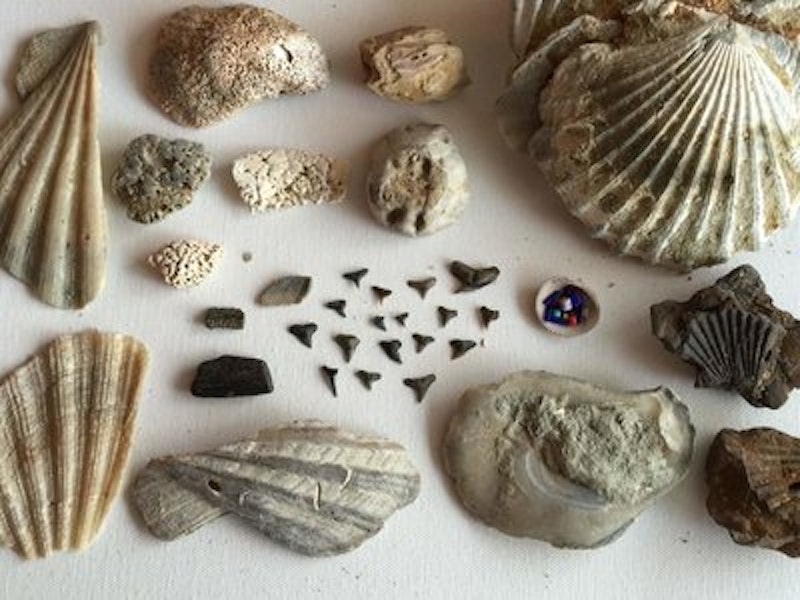 I’ve been such a close-minded beachcomber; it’s embarrassing. I attended a beachcombing conference three years ago and learned that there was much older stuff than sea glass to be found on the shores of Maryland’s Chesapeake Bay. Shame on me for not going to check it out sooner. But many folks who live on the Eastern Shore don’t like to cross that four-mile-long bay bridge to go to the Western Shore unless it’s absolutely necessary. There’s so much traffic over there, and civilization and people and cities. But once a month or so, I make the trek.

It all started with a photo on my Instagram page; a collage of beachcombing finds under the hashtag #favfindsfriday. Commenter Dr. Beachcomb asked if one of the items was a whale vertebrae fossil. I had no idea, I thought it was a weird shell. I’d found a total of four over four years. As a sea glass hunter, I don’t know the first thing about fossils. I tagged a fossil hunter in the photo, he said it was a growth plate from a dolphin vertebrae, but was modern. We don’t see a lot of dolphins in our upper part of the Chesapeake Bay. My daughter later reminded me about the one time we had to report a dead baby dolphin on the beach, though it was removed by an environmental group.

My kids were on spring break, so at Dr. Beachcomb’s recommendation, we took the specimens to Calvert Marine Museum on the lower Western Shore. The kids had been asking about shark tooth hunting because we've heard of people finding many at Calvert Cliffs State Park and have never found any on the Eastern Shore. The paleontologists were at lunch, and we left the bones, after being told at the museum that since they were light and not heavy, they didn’t seem old and also that more dolphins are coming further up the Bay now. Cool info, but the kids didn’t want to wait around for the lunching paleontologists and miss low tide; they wanted to go to the beach. We bought a laminated identification guide on shark, shell and sea mammal fossils and headed for the cliffs, a 1.8 mile trail on a beautiful day.

My daughter, who is preparing for her fifth trip to the World Series of Birding, counted 14 species of birds on the scenic nature trail, including a beautiful Great Blue Heron who didn’t move a bit when we walked by. Hundreds of turtles sunned themselves on logs in the marsh. We got to the beach and found many fossilized shells: barnacles, oysters, scallops, coral. Thefossilguy.com (Calvert Cliffs) describes the history of this part of the Chesapeake Bay; the fossils from more than 600 species exist here from an ancient ocean during the Miocene era, ranging in age from eight to 22 million years old. At first, we didn’t find any shark teeth, though we found a portion of a ray jawbone.

We headed further north to Brownies Beach, where a family friend hunts, and met two Indiana Jones-outfitted-looking fossil hunters. I asked if they could help the kids find shark teeth; they explained how tiny the shark teeth we’d search for were going to be. We’d been looking for huge megalodon shark teeth lying in the sand when in reality we needed to take handfuls of sand and sift for tiny baby tiger or lemon shark teeth. Once the kids learned this they started seeing them, but it was late in the day. I hadn’t found a single one. My eyes were trained to look for sea glass for so long, I could only find the beach’s “shipwreck beads” which are a tiny bead known to come from a modern shipwreck in the bay or defunct amusement park. I informed the kids we weren’t leaving the beach until I found one shark tooth. They tried to patiently explain how to find something natural-colored on a beach; my daughter had me lie face down in the sand where each wave chipped away a little more at a huge area of shell fragments, explaining you could see when a shark tooth would wash out.

After a long day of beachcombing, we were exhausted and hungry. The kids had a blast, they begged me to take them back at “a good negative low tide” where they could hunt for larger teeth in the water more easily (and we will), and just when we were all ready to give up, I found exactly one shark tooth, just a small speck of black in the otherwise white fragments of shell.

At one point in our day of picking up 20-million-year-old fossilized shells and teeth, I found a piece of sea glass; how foreign it looked on this beach. Picking it up, I Iooked to the east, straight across the Chesapeake Bay to my normal beachcomb hunting grounds, thinking about how normally this is what we search for: manmade shards of modern glass, while these ancient, prehistoric fossils are right across the bay, hiding in plain sight.