Given Out of Her Poverty

Stories from the laundromat. 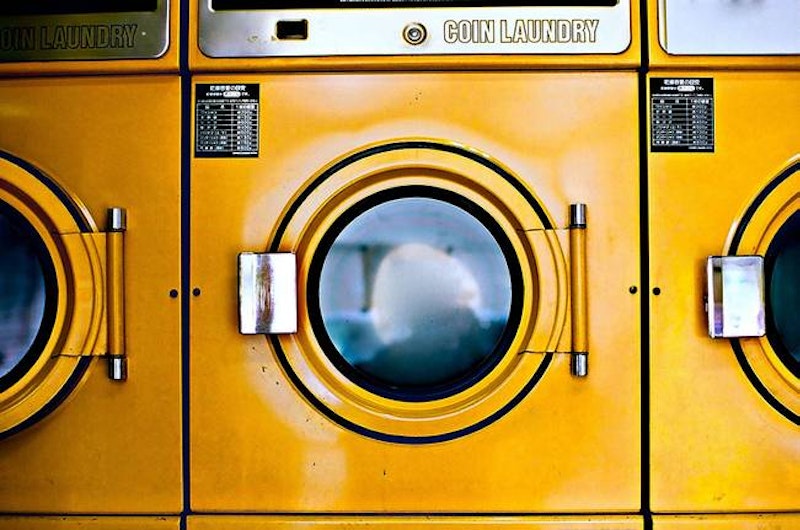 Among those who go in for demonic possession, there’s some debate as to whether objects can host evil spirits. According to the very Protestant site Got Questions?, the answer is no. “There is no biblical support for the idea that demons can attach themselves to physical objects. This belief is actually part of the superstitious practices and occult beliefs found in animistic cultures and among those who practice the occult,” the site says. Haunted houses and the like are just so much Halloween hokum. Okay, but try saying that as you observe the workings of my soon-to-be-vacated bachelor pad's washing machine. It's every bit as terrifying as a 12-year-old Linda Blair in full head-spin mode.

The damned appliance is loud and impossible to balance. It crashes against the walls like a madman in a straight jacket, launching himself at the padded interiors. An unusually large number of socks seem to disappear there in its watery abyss when my roommates use it. It may or may not actually be possessed. But if such things are possible, Uncle Screwtape has taken up residence there. Rather than call the exorcist and inquire if he does machines, with the awkward conversation that would follow, I took the clothes hamper to the local laundromat instead. Regular trips became part of the routine.

Lynden, Washington's spin cycle room is not ghetto. The wifi password has “sparkle” in it. The owner recently brought in several new machines and tried to class it up with a nautical theme. But still, laundromats tend to be for people passing through or for those who can't afford a washer-dryer combo. You know, poor people, including Mexican migrant workers, people with mental disorders, folks down on their luck who just want a clean change of clothes. I once had to give a fellow spin-cycler a ride home when he locked himself out of his car. Or there was that extra ride home for a carny named “Porkchop” for more detergent when the dispenser broke.

My laundromat days are nearly over. The wedding is Saturday and our new place has a stand-up washer-dryer combo with no demons to speak of. The missus loves it. It’d be silly to get nostalgic about a laundromat, yet I did see things there worth remembering. People who barely had anything would go out of their way to respect the stuff of others. Items left behind at the laundromat would linger, on the theory that someone might come back for them who really needs it.

Laundromatists could be scrupulous even about money. One time, somebody put up a sign and taped three dimes to it, explaining that another customer had left them in a change spout. It brought to mind that story from the Gospel of Mark. A dirt-poor Jewish widow had tossed two tiny coins into the temple coffers that added up to about a penny, if that. World class exorcist Jesus himself praised the widow's contribution to the heavens because she had given “out of her poverty.” It's a little jarring when you observe that sort of thing still happening today.