Mankind’s had a relationship with this healthy plant for centuries. 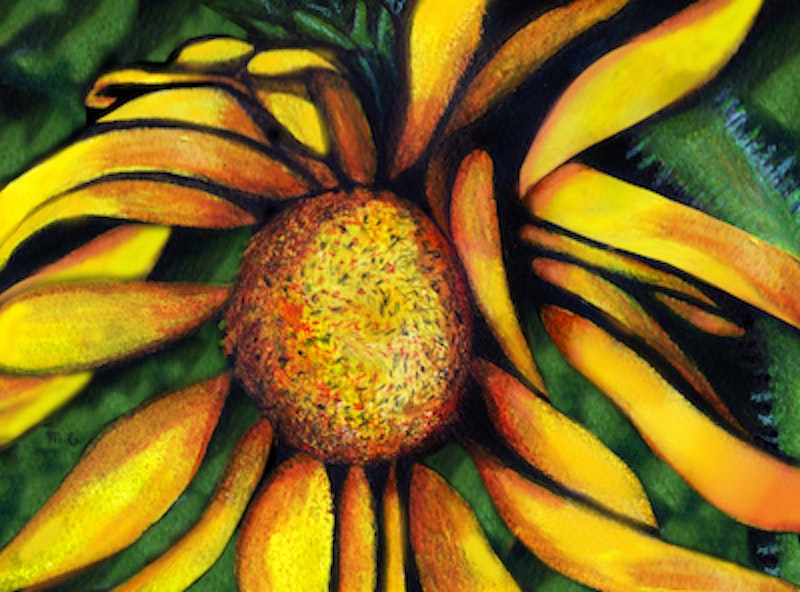 Along a country road, a mass of gold with green, heart-shaped leaves stands tall. As far as the eye can see, the fields are dotted with rows of sunflowers swaying in a gentle breeze.

A sunflower’s natural beauty is an amazing sight. Surely Vincent Van Gogh knew about it and he’s not alone. Mankind’s had a relationship with this healthy plant for centuries. Native Americans called the sunflowers their fourth sister, behind corn, beans and squash. Whether it’s a still life subject, garden favorite or beneficial crop, what makes a sunflower so special?

Helianthus Annuus derives its name from the Greeks. Helios, the handsome Titan guardian of oaths, god of sight translates to sun and anthos means flower. Let’s interpret some of nature’s mystery.

When you observe a sunflower close-up, a transcendent experience occurs. A radiating swirl of seeds appear like a kaleidoscope’s symmetrical forms. The spirals appear in a consistent circular pattern based on Fibonacci numbers, the very essence of the “golden section” ratio found in nature. Sunflowers are composite flowers where the darker center are actually little disk flowers. The petals that attract the pollinators are called rays. And not all sunflowers are the classic yellow—sometimes you’ll see a red, striped or bronze flower.

Sunflowers have get-up-and-go. The process is known as heliotropism; it’s when a plant follows the sun during the course of day. During peak bloom, to avoid the late afternoon sun’s scorch, the flower’s head remains facing the East. Places of worship say this movement gives the flower a spiritual power, like a religious follower of faith seeking the power of light.

Last summer John Ellsberry and I did some birding activity. A flock of American goldfinches had discovered the sunflowers around his Baltimore garden. Using some Boy’s Lifebirding tips, we set up an observation deck on his side porch. Coincidentally, his wife Susan was inside reading Donna Tartt’s novel The Goldfinch.

The birds performed a series of dive-bombs, flashing yellow and black in the sun. In an outstanding feat, they landed upside down on the sunflowers reaching for seeds. Watching nature is good for us. Merit badge!

The sunflower is a diverse plant that conducts business with the food industry, farmers, and consumers. Its many uses include: an ingredient in cosmetics, cooking oil and we've all snacked on toasted seeds. Bees are attracted to warm colors; sunflowers make the perfect target for pollinators. The plant’s nutrients help make honey and provide a necessary link in the food chain.

Yellow is the lightest hue in the spectrum, so that marvelous yellow color is bright for a reason. Design journalist Kassia St. Clair in her book The Secret Lives of Color says, “Yellow has simultaneously been a color of value and beauty.” Think about the color gold as a symbol of power, loyalty, and adoration. Yellow is also a color of communication and caution, which makes it the ideal warning color in road sign use. And yellow emphasizes sensationalism: yellow journalism was 19th-century “fake news.”

Regrettably, when you Google “yellow” the first thing that pops up is Chris Martin’s empty singing on a Coldplay single.

We dug through some art history files and found an infamous case involving sunflowers. Artists have always found ways to incorporate flowers into their lives and art, especially during the Impressionist era.

Between 1887-89, Vincent van Gogh painted a series of famous sunflower canvases in three shades of yellow. Van Gogh wrote, “It’s a type of painting that changes its aspect a little, which grows in richness the more you look at it. Besides, you know that Gauguin likes them extraordinarily.”

But did it really happen? In 2009, German historians raised an allegation that places doubt on the incident’s particulars. According to Paul Gauguin’s Intimate Journals, “Between two such beings as he and I, the one a perfect volcano, the other boiling too, inwardly, a sort of struggle was preparing.”

Was it possible Gauguin, sworn to a lifetime oath of silence, pulled a knife on van Gogh causing the loss of an ear? One thing’s for sure, those masterpiece paintings are priceless, if you’re interested in the money part.

As a labor of love, I take care of a rare patch of city green—a Midtown Manhattan garden located in a high-destiny development zone. It’s an area rampant with tourists seeking The Highline entrance. The landmarked townhouse garden makes an ideal setting for growing sunflowers: all day sun, full southern exposure.

Last spring, the garden received a scosh sprinkling from a single packet of seeds. A few weeks later, the seedlings flourished. The results were incredible, a Holy Trinity: three huge, gorgeous sunflower heads on 13-feet-tall stalks. Visible from the street, passersby stopped in awe and many took photos.

One hot August night, the baleful glow of streetlight cast an ominous shadow under the cover of darkness. An intruder silently opened the wrought iron gate, crept into the garden, pulled down the sunflowers and ripped off two heads. One flower survived.

The smiling faces of stroller moms disappeared. A child’s gaze now looked up in bewilderment and asked mommy, “Why?” It’s hard to understand a terrible act of vandalism. The unpleasant experience made me wonder too, why would someone go through the effort to destroy such a thing of beauty?

Meanwhile, I took a Sharpie and made a cardboard sign, “Please leave me alone so all can enjoy. Thanks.” Then I climbed a ladder and tied the sign to the remaining flower. Brimming with the sun’s blessings, smile season was extended around the garden.

The history and heritage of sunflowers is an irresistible choice for those who want feel the bristle of a stalk, maintain a healthy diet or stare into the vortex of a flower. Sunflowers continue to be one of the most valuable plants around the world.

And that lonely Manhattan sunflower, stood ’til the end of summer.