The Truth of Lies

I’ve told tall tales to get laid, get paid or avoid sticky situations. 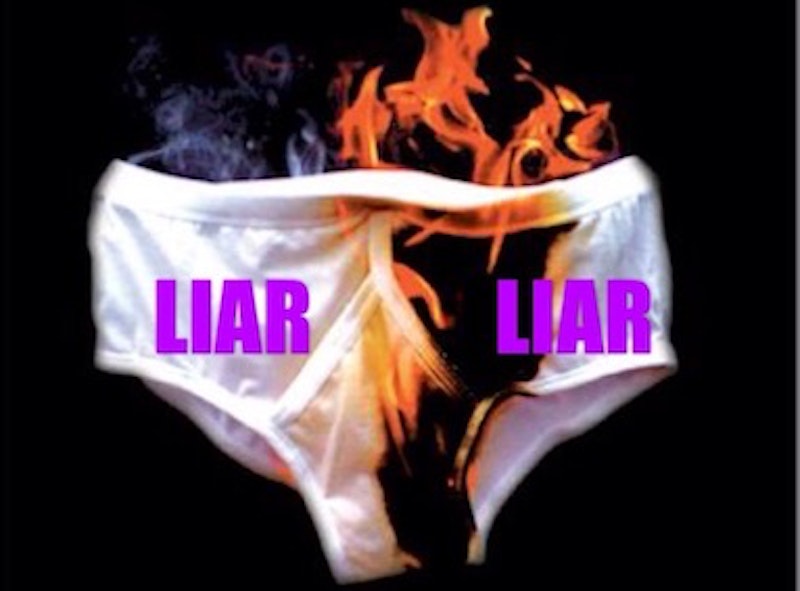 Everybody lies. Except babies who don't know how yet and the dead who wish they still could. Lying, the acceptable diet that nourishes a hungry country. It's the standard operational BS business of common everyday ordinary life. The history of lies began with truth and spread across the civilized map. Its very nature changes with the times as history is proven wrong over and over. The past is lies we tell to justify the present so we can slither toward future fables.

Can we exist without lies? A life of lies to live by. To each his own feast of fleshy fibs and juicy tattletale whoppers to digest and ponder. We lie about the secret sauce. Gossip made more palatable by embellishing facts. It's good for business. The fad facts of falsehood and a side of fashionable scandal to deceive us. That's what we do to make our deceptive life stories seem more interesting. Lies told once that spread like germs growing larger and more deadly again and again somehow becoming acceptable truth for all. The boy who cried wolf too many times has nothing on our idiotic meanderings that border basic truisms.

Little white lies and broken promises are the foundation of modern society. We love the clever lie. Spreading rumors and fabricating half-truths against those we dislike or disagree with. Bold-face lies are the stuff of kiddie blame games. Like when you get caught with your hand in the cookie jar. Blinking those big guilty eyes and blush… it's not me, it's them, a routine of lies from a very young age. It becomes part of our daily soliloquies to parcel out the gruel of untruths and force feed falsehoods. We eat our lumpy pabulum listening and lying regularly with second helpings of distorted discourse. Dish the dirt and gab like old granny crones cackling over back alley fences.

Honesty, integrity and respect have no place in society’s landscape. Tell yourself that unbelievable epic story again. It's our way here. It's not the united dream we share. You can't take anyone at their word with a promise, a prayer or a handshake. The driving force behind success may not include trust, loyalty, or compassion. Hatred, cruelty and lust are the free lunch. It's the stuff of lawyers and priests. Mothers and presidents. The bread and butter of political slander with a schmear of fatty religion. Customer service industry fast talking insincere salesmen of no return. Time-honored traditions as honest as cagey strangers with deals to deliver 10 percent off just for you.

I’ve lied about everything under the sun, moon and stars. Under the bed or hiding in the closet, basement or attic. In the dark night of my deepest invention. Lies piled on a cheesy lasagna of meaty lies in the tangled web weaved to trap a fly on the wall of a room full of lies. This too is a lie I tell myself to make me feel credible among my peers. And the truth may set us free from all the lies we pretend to be. Something other than what we truly are. Flawed, imperfect self-centered indulgent human beings. Full of our own special brand of odor with plenty of sweet smelling unguents and pungent aromas to cover up the ominous singular scent. We stink so nicely among polite company.

I’ve told lies to save my ass from beatdowns, whippings and whoopings too numerous to lie about. I’ve told tall tales to get laid, get paid or avoid sticky situations. And I’ve been beaten for lies. Lying to get over on others, win friends and influence people. A braggart and a bully pushing the hard line lies of all for one and one for none. A magnificent fraud in the making. We complement each other’s inaccurate accounts of what and who balances in time served or spent backbiting the years. Cancelling ourselves out with disparaging words so mythic. A loudmouth rebel yell of monosyllabic mutters. So full of it we wouldn’t know it if it bit our ass to spite our ever growing Pinocchio nose.

Nobody knows where the term “liar, liar pants on fire” originates precisely and most speculation is probably just historic lies. We can’t prove a damn thing beyond a doubt, a nod and a blink. The ratio might be for every truth there’re 10 lies to disprove it. Every hoax, forgery or perjury for or against results in elaborate ripples in the scheme of things. This story might plagiarize another story on the subject. A dubious topic of casual conversation turns the table on truth, justice, and the way of manipulating words to suit the need of individual tailored lies for every occasion. A custom lie for every persuasion. Place your hand on the good book and swear to tell the truth, the whole truth and nothing but the truth so help you in the name of lies. I swear.