The Spine of Ridgewood 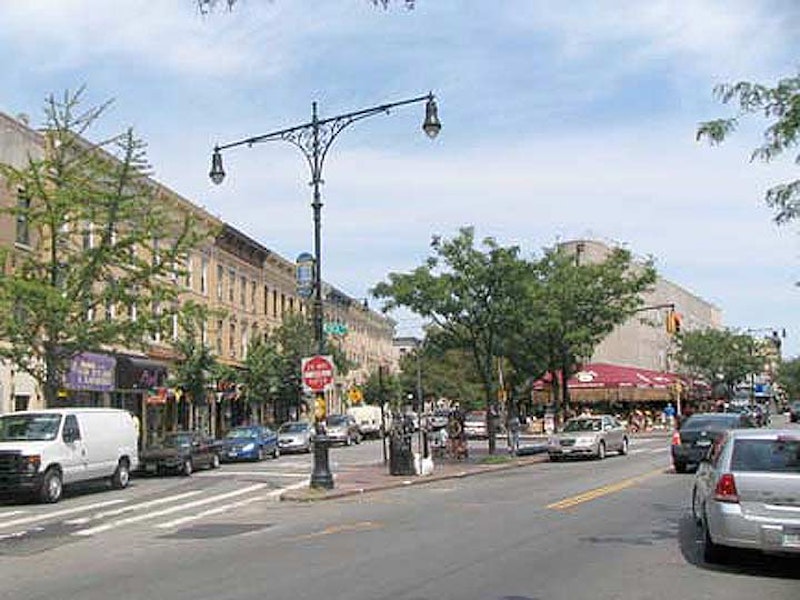 One of my favorite neighborhoods in New York City is Ridgewood, which sits just northeast of Bushwick along the Brooklyn-Queens line and extends east and northeast to Maspeth and Glendale. Its still-robust atmosphere reminds me of Brooklyn’s Bay Ridge, where I spent my formative years. Its east-west spine and main shopping street is Myrtle Ave.

Myrtle Ave., one of the lengthiest streets in both Brooklyn and Queens, runs for nearly 15 miles from Jay St. MetroTech complex in the heart of downtown Brooklyn, east to Jamaica Ave. at the former Triangle Hofbrau. It was first laid out in 1835 from Fulton St. to as far as Cripplebush Rd., an ancient Kings County track now largely replaced by Bedford Ave. It was extended in 1839 to Brooklyn’s Broadway, and again in 1854 as the tolled Jamaica Plank Rd. out to Jamaica. (Most of NYC’s toll roads of this type were made “free” around 1890-1900.)

Horsecars appeared on Myrtle in 1854, which later became trolleys taking electric power from overhead wires. The infamous El shrouded Myrtle from 1888 to 1969—at first as far as Grand Ave., to Brooklyn’s Broadway early in 1889, and to Wyckoff Ave. later the same year. The eastern extension of the El today shrouds the street from Broadway east to Wyckoff.

The western end of Myrtle Ave. between Fulton and Jay Sts. was eliminated for courthouse construction and Cadman Plaza in the 1950s, while the stretch between Jay St. and Flatbush Ave. Extension became part of MetroTech Center beginning in 1989.

Ridgewood, originally known as South Williamsburg, sprung up north of the reservoir constructed in 1856 to supply water to the then-city of Brooklyn in what’s now known as Highland Park. Water flowed through a series of culverts through Nassau and Queens, and today the names Aqueduct Racetrack, North and South Conduit Aves. and even Force Tube Ave. reflect their former presence. The reservoir was named the Ridgewood Reservoir after the Ridgewood Ponds, the culverts’ eastern source, near Wantagh in Nassau County.

When development came to South Williamsburg in the mid-to-late 1800s, residents desired their own identity and came up with the name Evergreen for the nearby Evergreens Cemetery, but the region was formally named Ridgewood in the 1910s for the then-important reservoir, which still exists but was decommissioned in the 1960s.

Until the 1910s and 20s, Ridgewood was suburban and nearly rural in some spots, with farms and sprawling country homes, but developers Paul Stier and Gustave X. Mathews made marks that survive to this day by constructing acre upon acre of handsome row houses along its streets; Mathews’ blocks, many of which are now landmarked, feature yellow bricks from the Balthazar Kreischer kilns in Staten Island. 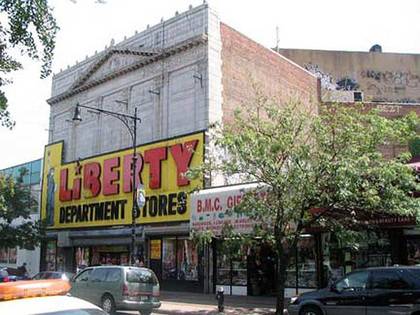 We encounter the first of many present and former theaters along Myrtle Ave. between Wyckoff and St. Nicholas Aves., the RKO Madison, named for Madison St. (which runs in back of the theater) and for, presumably, the street’s namesake, President James Madison. The theater was designed by architect Eugene De Rosa and opened November 24, 1927. It was a large and sumptuous movie palace boasting more than 3000 seats, a foyer over two stories high with crystal chandeliers, marble staircases and a vaulted ceiling. The theater opened in November 1927 and featured variety and vaudeville shows in addition to motion pictures, and had an orchestra pit with three separate sections for the orchestra, piano and Kimball organ built specially for the theater. The Madison’s owners went all-out to compete with the well-established Ridgewood Theater, which had opened in 1916.

How the mighty have fallen! Only the ground floor is open to the public as a department store these days, after closing ignominiously as a duplex grindhouse in the 1970s. What secrets may still reside in the upper floors? 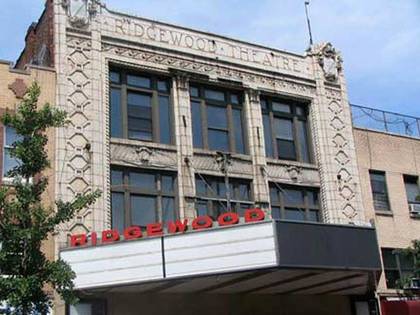 Despite several development plans over the years, the Ridgewood Theatre building remains up for sale. It was built in 1916 by prolific theater designer Thomas Lamb and the 2500-seater was based on the Mark Strand Theatre, formerly at Broadway and W. 47th St. at Duffy Square, one of the first buildings constructed especially to show movies. The Beaux-Arts exterior is a riot of glazed terra cotta and has been granted NYC landmark status, which may be making it harder to sell because the exterior cannot be significantly altered. Unlike many other area movie houses that gave up the ghost after a few decades the Ridgewood hung on for over 90 years (albeit as a multiplex), closing as a theater in March, 2008. But what will be in the next reel for the doyenne? 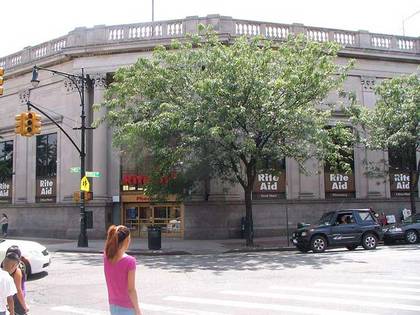 Ridgewood National Bank was organized in 1909 by a prominent neighborhood group headed by competing developers Paul Stier and Walter F. Ring, together with architect Louis Berger (who built the attractive attached homes found on Stockholm St. between Woodward and Onderdonk Aves.), and they built this magnificent bank building in 1910; though it’s now a drugstore, some of its architectural highlights can still be seen inside. Ridgewood National did not last long independently—it merged with Manufacturers Trust, a descendant of JP Morgan Chase, in 1921. 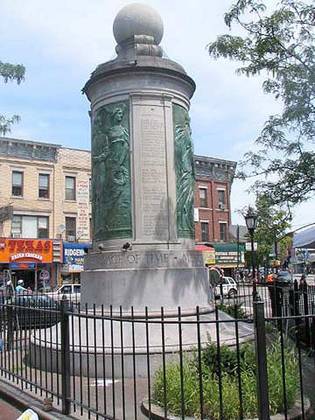 The Ridgewood Remembrance sits at the crossroads of Myrtle and Cypress Aves. and honors those who died in World War I. It was dedicated on Memorial Day, 1923; the distinctive concrete pillar, topped by a sphere, is 11 feet high and contains three bas-reliefs of a soldier, a sailor and a pilot. The soldier is accompanied by a woman with a torch; the sailor by Neptune; and the airman by an allegorical female figure. The architects were Helmle and Corbett, the sculptor Anton Schaaf.

Opposite the Ridgewood Remembrance is Carl Clemens Triangle, named for the longtime editor and publisher of the Ridgewood Times, in which he bought a share in 1933. He also worked for radio station WHN, which first broadcast from a now-demolished building at 8-16 Cypress Ave.; the station was launched by Ridgewood Times owner George Schubel in 1922. WHN is now ESPN-WPEN 1050. It was the radio home of the Yankees and alternately the Mets in most years between 1958-88. WHN was likely NYC’s most successful country music station, operating in that format from 1973-87. 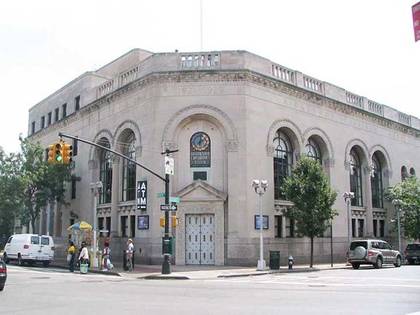 A coterie of shopkeepers, entrepreneurs and other local residents were the founders of the magnificent Savings Bank of Ridgewood, built at the corner of Forest Ave. and George St. in 1921. Eight years later, the name of the bank was changed to Ridgewood Savings Bank, which it is still known as today. A new main office was completed at Myrtle and Forest Aves. in 1929. It superficially resembles the earlier Ridgewood National Bank (see above) but with massive arched windows and Art Deco touches including the backlit clock on the chamfered corner, which told the correct time the last time I stopped by. 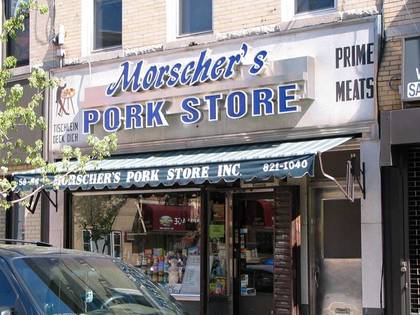 Ridgewood, once a heavily German neighborhood, still maintains traces of its heritage, especially in its restaurants, delicatessens and bakeries.

Morscher’s Pork Store: (Catalpa and Woodward Aves., a couple of blocks north of Myrtle): The German inscription, Teschlein, dick dich, means, roughly: “little table, set yourself” and is taken from the Grimm brothers’ classic story “The Wishing-Table, the Gold-Ass, and the Cudgel in the Sack” (the context is a magic table that sets itself). Morscher’s is one of a series of butcher shops that have been in this location since the early 1900s, Morscher’s itself since 1957. The shop features sremska (Hungarian sausage), debricina (Slovenian sausage), kielbasa, wursts of every thickness and mildness or strength, general meat cuts, cheeses, and imported European canned goods.

Rudy’s Bakery & Café: (905 Seneca Ave. between Myrtle and Catalpa Aves.): This place has been in business for just over 80 years. The German word Konditorei on its awning means, roughly, “a place to sit, relax and eat.” That has been possible in recent years, as Rudy’s has added an interior coffee bar. Best known for cheese danishes, Black Forest cake and its assorted cookies, longtime owner Toni Binatti has brought Rudy’s into the 21st century with WiFi access, the better to sit inside, sip espresso and munch on goodies.

This section of Myrtle Ave. is best accessed by the Myrtle-Wyckoff L train station (the L will remain in business in Brooklyn after its East River tunnel closes for 15 months beginning in April 2019), the J and M trains at Wyckoff Ave., and the B54 and Q55 buses on Myrtle Ave.. The B13, B52 and Q58 buses also stop nearby.