I’d hoped the invention would serve to heighten people’s awareness of how their biological condition affects their judgment. 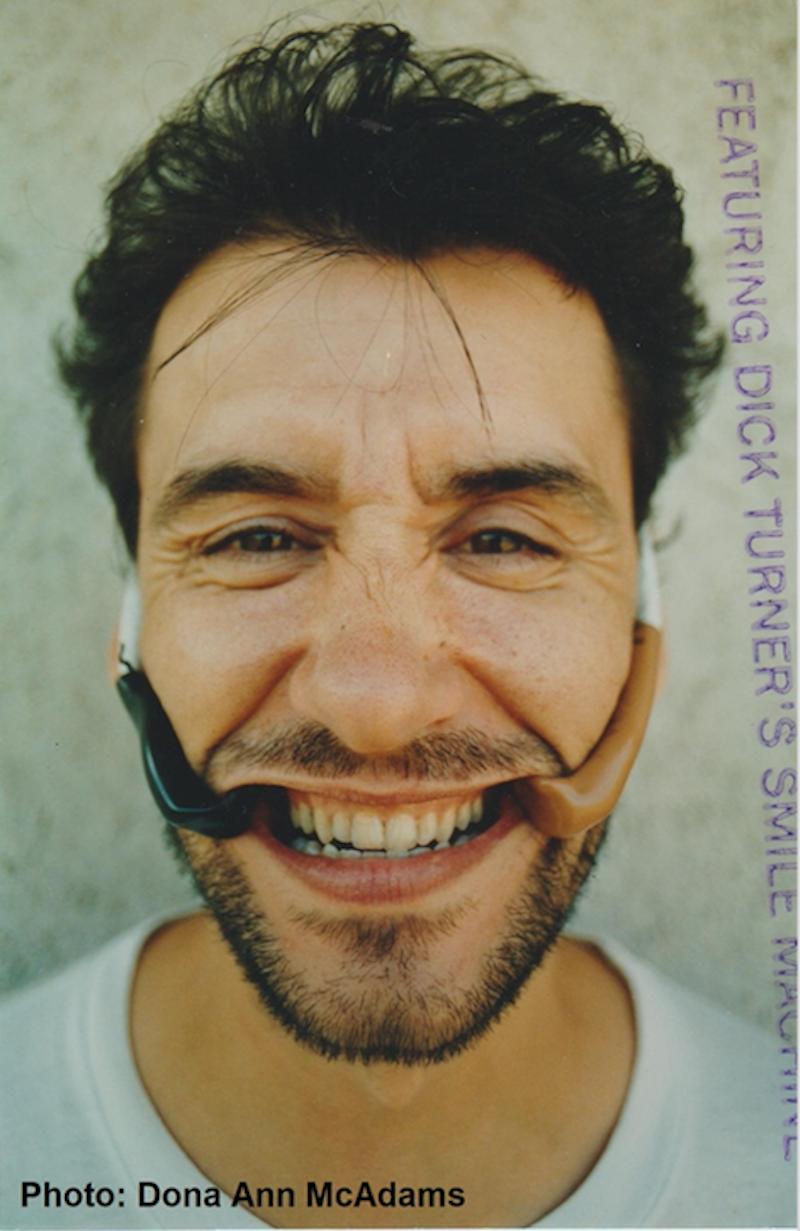 In 1992, using a hot-air gun (the type used for removing dried house paint), some empty felt pen tubes, a hot-glue gun and ¼” elastic bands I made a device, meant to be a conceptual work of art, to keep one smiling at all times. I created a host of accompanying materials and slogans, my favorite was “Psychological Affects Through Physiological Effects.” To advertise this device I contacted a friend, John Berndt, who had a fledgling graphics business, and he helped make an ad which I then put into the Village Voice for the month of November. This led to a few sales and some notice from press sources. Then, another friend, the artist John Ellsberry, called me one day to say The Smile Machine was being talked about on National Public Radio someone else was claiming credit for its invention.

I turned on the radio and couldn’t believe it. There she was, shamelessly talking to her heart’s content. A week later it made Life, Sports Illustrated and Newsweek. This person turned out to be the organizer of the 1994 Norwegian Olympics Committee who’d seen my ads, stole my idea and was using it as part of a publicity campaign. Her brilliant idea was that the Norwegians, who have a reputation for being dour, would have to learn to smile so they could joyously meet all the international visitors coming to Lillehammer for the Winter Games. I contacted the Norwegian Embassy, threatening legal action (a bluff because I didn’t have a cent to pay a lawyer) and finally getting recognition for its invention. Meanwhile the Norwegians didn’t like how they were being presented in their own publicity campaign and so the whole thing was dropped.

It was an entertaining undertaking. Yet it left me with a certain nagging dissatisfaction for I never really felt that the ideas I had were properly conveyed. I’d hoped, though The Smile Machine had a humorous aspect to it, would be taken seriously, not unlike certain works by Marcel Duchamp. That didn’t happen. The Smile Machine, stolen and turned into a minor media Olympics event, bore no resemblance to what I’d hoped to convey.

What were the ideas that motivated this project? There were two basic concepts. First, I’d hoped that The Smile Machine would serve to heighten people’s awareness of how their biological condition affects their judgment. It was my take on Freud’s concept of biological materialism. Almost everyone gets irritable when, for example, they are tired, hungry or sexually frustrated. And people are usually happy when they get what they want: sleep, food or sex. Thus frustration or satisfaction are just two opposing states which act upon us psychologically through the needs of our body. I wanted to convey that it’d be useful to learn to identify and control these forces if we are to be truly happy, to learn to be content with ourselves as objects being acted upon by ourselves.

The second idea, more nefarious, was about how people buy things to make themselves happy but that this never works because products are always substitutions for happiness. I reasoned, why not make a product which is an end it itself? A product not to be ritualistically bought, used, thrown away, and replaced by another, but one which was its own finality? As one of the slogans read, “The last product you’ll ever need!” I hoped to bring down the entire capitalist edifice with a single conceptual strategic blow. While ambitious, these ideas aren’t complex. The publicity and accompanying materials gave the information needed so that anyone could arrive at these conclusions.

Instead, I had people call from radio stations asking if it was a sex toy, or if I’d invented it late at night, implying that I was a bit crazy. They wanted me to play the role of the wacky inventor and when I tried to be serious and explain its theoretical significance I was consistently hushed-up. More bizarre, I received letters from people asking if it really worked, one from a psychiatrist in New York. I had grave concerns for the mental health of all concerned, particularly the patients of the psychiatrist.

There you go! I finally got it off my chest. Just Keep Smiling!