The Root of the Problem

This is how I chipped my bottom front tooth. 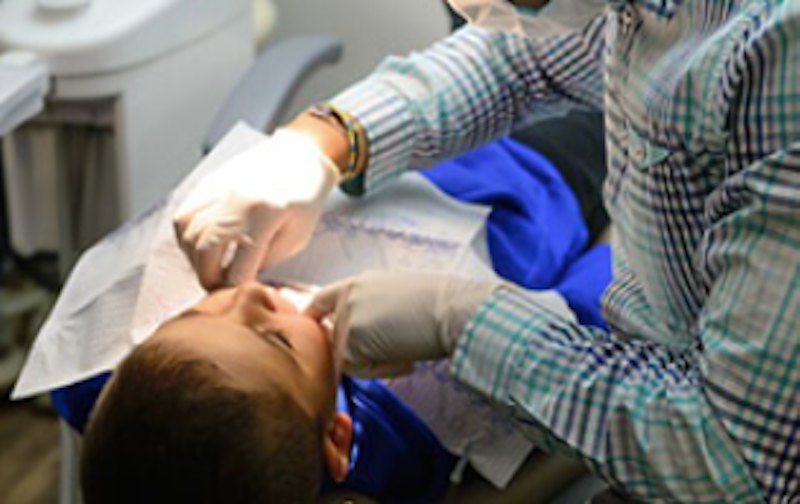 I was maybe eight years old. It was perhaps January, 1989. I was likely in third grade. We were in gym class. At Hardy Elementary School. In Arlington, Massachusetts. The game was floor hockey, played in a badly-lit gymnasium with beige linoleum floors. I was a fast runner who played lots of sports outside of gym class. I wanted to win everything. I was running fast, with a hockey stick held appropriately low to the ground, as instructed by our PE teacher, Mr. Swanson. Joey LeMar, wearing a Star Wars t-shirt, was not holding his stick low to the ground and Joey LeMar wasn’t trying to win anything. As I remember it, Joey LeMar was spinning in a circle with his stick held up like a sword. Joey LeMar’s stick ended up in my mouth.

This is how I chipped my bottom front tooth. Someone walked me up to the school nurse, who was entirely unfamiliar with chipped teeth. After calming me down, she had the whole gym class on their hands and knees looking for the top portion of my bottom tooth, which was probably washed down with the blood from my lower lip minutes earlier.

Thanks to my mom’s dental insurance, my tooth was “fixed” a day or two later. The dentist put a bonding on the top. It was relatively even with my other eight-year-old teeth. Life moved on. Now, when I was bored, my tongue had something to play with, right there in front.

Over the next 15 years, the bond slowly wore down. The pain began to ebb and flow, always mild. When I was 23, and about to move out to California to begin the second act of my academic career, my mom urged me, then nagged me, to have the tooth looked at. I was still on her insurance. She visited the dentist regularly and had all kinds of situations going on in there. I rejected the opportunity. At the time, I remember thinking this pain is real. It was identifiable.

My life had been psychologically demanding. The absence of my father for 12 out of every 14 days, with a weekly 90-minute outing for dinner, while for 12 out of every 14 days, I lived with the rigidity and demands of my mother. Like any childhood, there were moments of physical pain, usually basketball-related. A broken pinkie finger. A broken thumb. A severe cramp in my calf. There was the everyday threat of an older brother who often transferred his anger to me in the form of wrestling, shoving, or shouting.

Why would I get rid of this actual pain? It was usually mild. After a childhood of perfectionism, I was beginning to embrace imperfections. In 2003, when I was desperate for my own life to begin again somewhere new, it wasn’t easy. The chipped tooth was a constant reminder. I didn’t need a tattoo. A few years later, I’d intentionally leave my California license plate slanted, hanging off the front bumper of the newly-purchased, used 2000 Honda Civic. It had one good bolt. So what if it wasn’t even? Life wasn’t even. One of mom’s refrains we heard as we were growing up. “Life isn’t fair.”

Over the last 20 years, I’ve lived with increasing tooth pain, often relatively dull. When I pushed through exhaustion to finish longer college papers, I felt it more. Again... a fitting pain for a difficult moment. When I started teaching in high schools and dealt with teenage behavioral madness, the pain was sharper. The pain was closely related to sleep. Aside from itchy eyes and brain fog, the decaying nerve woke up when I was running low, surviving on coffee.

I’ve generally avoided the dentist for the last 15 years. I brush regularly. I use mouthwash. I floss once in a while, often with a slight trickle of blood coming from my lower gums. I’ve been lucky. About three or four years ago, the bond wore away completely and the tooth started to darken. I was pretty sure the nerve had finally given up, so, I went to the dentist. They referred me to a dental surgeon for a root canal. I had the appointment. I planned to go and then postponed it. Root canal avoided! The reminder of my existential pain was not needed anymore. At the time, we had a crying two-year-old. A daily reminder. I’ll blame the pandemic for avoiding the root canal in 2020 and early-2021.

Now, with the financial help of my partner’s dental insurance, I got a new referral from the same dentist I’d seen in 2019, and scheduled an appointment at the Endodontic Care Center. The End-times at the Endodontic Care Center. The plaques on the wall were impressive, though I noticed a couple were crooked. That’s the problem with plaques: they tend to reject balance. While taking them in, I thought: Dentist. Plaque. Certificate Plaques. Irony.

One of my high school girlfriends, Helen, became a dentist. I haven’t seen her since we graduated in 1998. But when I saw she’d become a dentist, I thought: fitting. Helen was extremely detail-oriented. A daughter of Russian immigrants who’d been in Israel and then came to the Boston area, when Helen was young. She was a perfectionist. She made pointillist dot-paintings. Her mom was a doctor. She helped transcribe her mom’s notes from Russian. I sometimes tell a joke: Dentists enjoy giving people pain. Their patients just sit there and can’t talk while they inflict pain. Helen thought I talked too much. She liked action movies. I liked indie films. She wanted me to make a move. I was incapable. Too many thoughts swirling around in there. She was cute and kind, but we weren’t a great match. As spring approached in Boston, we planned to do a charity walk together. “The Walk for Hunger.” After walking about 10 miles together, we went home separately. Later, Helen ended up in the hospital because she’d eaten chicken so ravenously that a bone had punctured the back of her throat. I’d been avoiding telling her I thought we should just be friends. She could tell. When I called to ask how she was doing in the hospital, she could tell I needed to say something. I felt horrible and guilty for not hiding the truth better. This wasn’t the time. I visited her with our friend. I can’t remember how I told her. A few days later, at tennis practice, I was taunted by an older moron who’d heard about Helen’s injury and made sexual references. This was 10th grade.

Dr. Ho was efficient. There was the x-ray. There was the nerve. That black area, that’s where the nerve decayed. The tooth was dead. I went out to the front desk and made another appointment. I avoided the idea of needles in my gums and a drill in my tooth for the next week. As the big day approached, we took our little girl to her second dental visit. We encouraged her to “be brave.” She didn’t enjoy them scraping around inside her mouth. No one really does. We just accept the necessity of tooth doctors because we know having no teeth is worse. Our four-year-old had no cavities. She got little toys and a coloring book afterward. Maybe they should try that with adults, too. I figured I’d tell Dr. Ho.

This morning, as I was heading out the door to drop her off at pre-school, I told my partner, “I’m not looking forward to this.” She told our daughter to tell me, “Daddy, be brave.”

At the office, butterflies appeared in my stomach. I used to get nervous all the time. Before the start of a game, my mouth would go dry, but once I started running, I was fine. I’ve mostly outgrown the feeling. Anxious child. Anxious twentysomething. Less anxious now that I’ve located the anxiety, written about it, had years of therapy, a non-anxious partner, and good friends to talk with. If I’d kept up the level of inner dialogue and anxiety I lived with in my teenage years, I would’ve dropped dead years ago.

There I was. Sitting in the waiting room with a few butterflies. Reading about the Delta variant and the uptick in Covid cases in the South wasn’t helping calm me. I stopped reading and took a few deep breaths.

Dr. Ho came out and said, “Let’s Get You Numb!” It was the most passion I’d seen him display. The numbing gel and then several needle injections. Dr. Ho mentioned I’d feel a slight pinch and counted 1... 2... 3. If my daughter can sit through her four-year-old shots without too much struggle, I can do this. My eyes were closed. Soft pop music station with endless commercials. At one point, we hear Miami Sound Machine’s “Conga.” Dr. Ho asks the assistant, “Whatever happened to them? They retire?” The assistant tells him they own half of Miami now. Don’t need to perform anymore. Dr. Ho could’ve been building a skyscraper in my mouth for all I knew. The sound of the drill wasn’t pleasant. I imagined jackhammering on the street and my infected gum as the sewer line. Then I imagined Joey LeMar. I wonder if he’s even kept the memory.

—Jonah Hall will soon publish a collection of essays, poems, lists and absurdities, tentatively titled The Root of the Problem: Essays from Real Life. He hosts a podcast called Jonah Asks.