Brooklyn and Queens are conjoined twins, land-locked through Ridgewood and the Cemetery Belt. 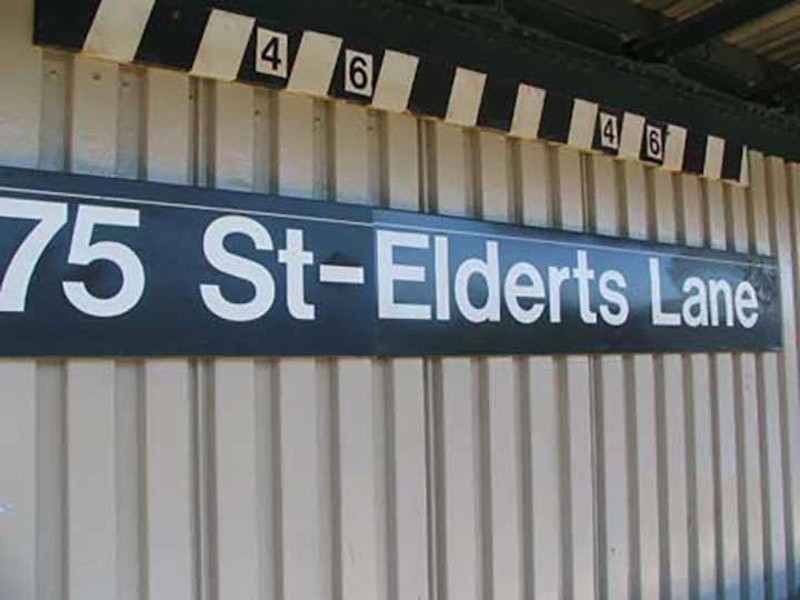 Not so with Brooklyn and Queens: these twins are conjoined, land-locked through Ridgewood, the Cemetery Belt, in an overlooked section in Brooklyn’s far east and Queens’ far west named City Line, since until 1898 Brooklyn was a city of its own. At all times, the border’s undefended. But these are two different lands, and things can be uneasy. A walk down the border will illustrate how. 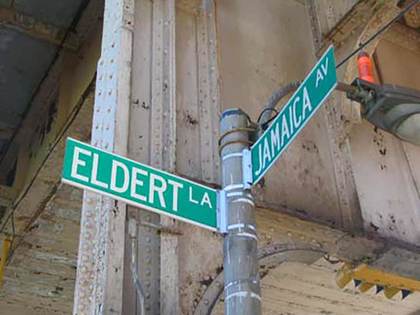 The border runs down the middle of a street that cartographers over the years have not decided what, exactly, to call it. Newer maps and street signs proclaim it “Eldert Lane,” while the elevated train station above Jamaica Ave. adds and “s” and calls it “Elderts Lane”; undoubtedly there was a landowner called Eldert at one time, and it began as Eldert’s Lane. It was known as Enfield St. for a few decades in the early-20th century.

Eldert La. runs north-south from Cypress Hills, from Jamaica Ave. in the north, south to Flatlands Ave., with some interruptions. Between Jamaica Ave. and 95th Ave., it runs along the Brooklyn-Queens border, which runs down the center of the street. Houses on the west side of the street carry Brooklyn addresses, even numbers beginning with two. Houses on the east side carry hyphenated Queens addresses, beginning with 87-01. Eldert La. is one of 17 streets that border both Brooklyn and Queens. The others are Onderdonk Ave., Flushing Ave., Cypress Ave., Menahan St., St. Nicholas Ave., Gates Ave., Wyckoff Ave., Irving Ave., Interborough (Jackie Robinson) Parkway, Robert St., 95th Ave., Drew St., Liberty Ave., 75th St., Dumont Ave. and 78th St. The numbered streets are part of Queens’ numbering system. 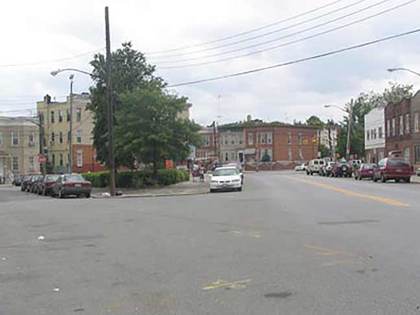 Eldert La. is a relatively short street but it witnesses the birth and death of two important Brooklyn and Queens thoroughfares. Rockaway Blvd., originally known as Rockaway Rd. going back to the late-18th and early-19th centuries, here begins its lengthy journey to the Five Towns in Nassau County. The name of the boulevard goes back to the Native-Americans; the Rockaway, and their main settlement Rechqua Akie, were centered in what is now Far Rockaway, Queens, the east end of the peninsula. After the Governor Kieft war against Native-Americans in 1645, many Rockaway moved to northern New Jersey; while after other land disputes with other Native American groups and the British in the 1680s, many members repaired to Patchogue, Long Island, where Rockaway are found today. 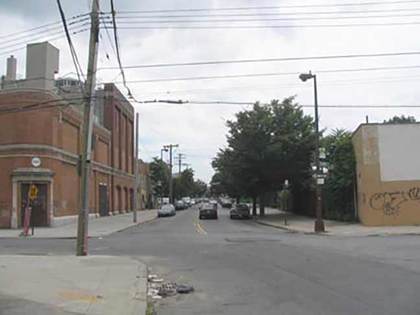 I’ve mentioned that Eldert La. is the spawning ground and killing floor for some major throughfares, and we’ve already seen the beginning of Rockaway Blvd. Just a block south is the end of Fulton St., Brooklyn’s main shopping street, at least on its western end, and the dividing line of several neighborhoods including Crown Heights, Bedford-Stuyvesant, Clinton Hill and Prospect Heights. It also determines several of Brooklyn’s street systems, as all the avenues named for New York State cities, like Albany, Troy, Schenectady, etc. Avenues have their northern ends at Fulton, while several Bedford-Stuyvesant Avenues, Marcy, Tompkins, Throop, have their southern ends on this street, which was named in the early-1800s for steamboat pioneer Robert Fulton.

Through much of the late-19th and early-20th centuries most of Fulton St. was shrouded under two elevated train lines, the Fulton St. el, which ran from the waterfront then down Van Sinderen and Snediker Aves. Fulton St. then had a block of sunshine before another el, the one running down Broadway from Williamsburg and Bushwick and out to Jamaica, covered it again. That line is still extant and some of its 1870s steelwork can still be found above Fulton just east of Jamaica Ave.

The only part of Fulton that had any sun at all was the six blocks of its run in Cypress Hills, as the el turns north on Crescent St. That’s the section we see here. East of Eldert La., Fulton St.’s roadbed continues as 91st Ave., while its name doesn’t. Adding to the confusion, part of Jamaica Plank Rd., later Jamaica Ave., was known as Fulton St. for lengthy sections well into the 1800s (Jamaica Ave. begins at Fulton St. in Brooklyn where it meets Pennsylvania Ave.)