Sneaking into backyard anti-aircraft bunkers in Hawaii in the early 1960s. 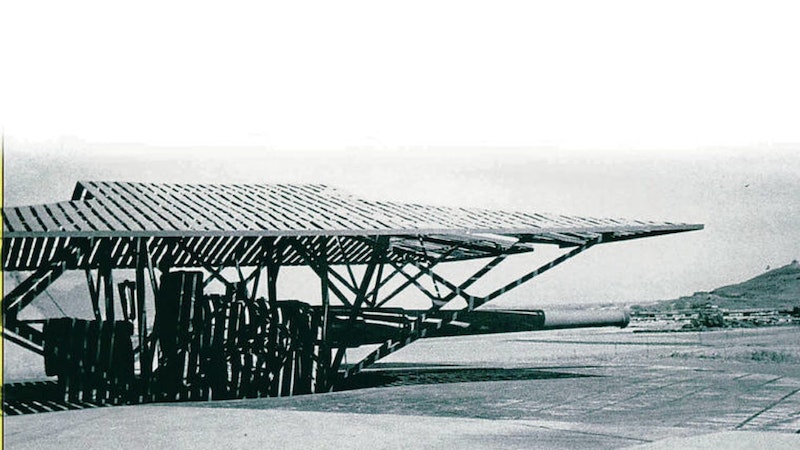 On the hill behind our family home in Kailua was an abandoned concrete anti-aircraft bunker. Hewn into the soil of Oahu, the bunker was visible from Mokapu Drive as a dead-eyed, flat-topped monument to a bygone era of air defense. It’s still there. Had this bunker existed on the morning of December 7, 1941, its crew would’ve had an excellent bead on Jap Zeros that strafed the runway of Kaneohe Naval Air Station. But it was built in 1942, fortification against a return attack that never came.

Going up to the bunker became a regular Saturday morning objective for my best friend Kit and me. By 1963 it was a dank, efflorescing tomb. I’d often pored over my father’s scrapbooks as a youngster; war photos carried home in a drab olive duffle bag. A muddy, snowy conflict, depicted in black and white. But 18 years after the end of WWII, the coffee-table-book war, it was still Japs Kit and I stalked with Mattel submachine guns and plastic grenades. First order of business: avoid wasps nested in the canopied bush at the base of the hill, which follow the stink of sweat and leave a mound of venom in the elbow. Ascending, the panorama of Kailua Bay would turn us, white breakers rolling to the emerald shore, the bounding of the planet. I remember sometimes wishing for a different mission, inchoate adolescent sadness on the wind.

These foothills hold no candle to the Pali Range they steppe to, where plunging cliffs, and stunning waterfalls await the hiker. Under our high-top tennis shoes were the kind of unnamed hills and scrubby gulches remarkable only if fought and died over. Just in view of the eyebrow of the bunker we’d move out, the phallic carrying, down low over the terrain. Kit overhands a grenade through the opening. The defenders are tenacious, a word learned from coffee table books. In the coolness of the liberated bunker, we ate lemon peel.

KNAS sprawled below like a military play set—a tableau of gray buses, convoys of Jeeps, runway-parked C-130 transports. Khaki housing stretched—still does—to the bowl of pumice which makes Kaneohe Point. An F-15 lurches off a runway. Rat-ta-tat-tat the plastic bolt action smatters as the jet climbs level with the bunker leaving a trail of wavering black vapor.

The sound barrier breaks. Women tending plumeria gardens regard us blankly as we trudge through the neighborhood on the way home. A rain torrent has passed. I sit on the curb in front of our house on Mokapu Drive. Kit’s mother has taken him to a dental appointment.

There’s a disturbance at the intersection of Mokapu and the State Highway. Traffic has stopped in both directions. Hundreds of olive-drab soldiers in shoulder-rubbing formation are quick-stepping through. I move back to the porch, relative safety, like the bunker, once taken.

A downbeat of polished boots draws near, the jangle and clunk of equipment. A bark of command, the last voice you may expect to hear in battle. One helmet at the end of the column catches my eye. Under it the face of an island kid, a local boy, gulping for air.

A marching pivot, as another order turns the brigade right. They’re heading up to Mokapu Hill, training to face the Yellow Peril, not on the coffee tables yet, Vietnam. I walk back out to the curb, look up toward the bunker, and beyond, to the cliffs of the Pali Range, over which the forces of Hawaii’s greatest king, King Kamehameha, pushed his enemies to their deaths.