We use paper towels, of course, but still keep real towels around, and not just as decorations. 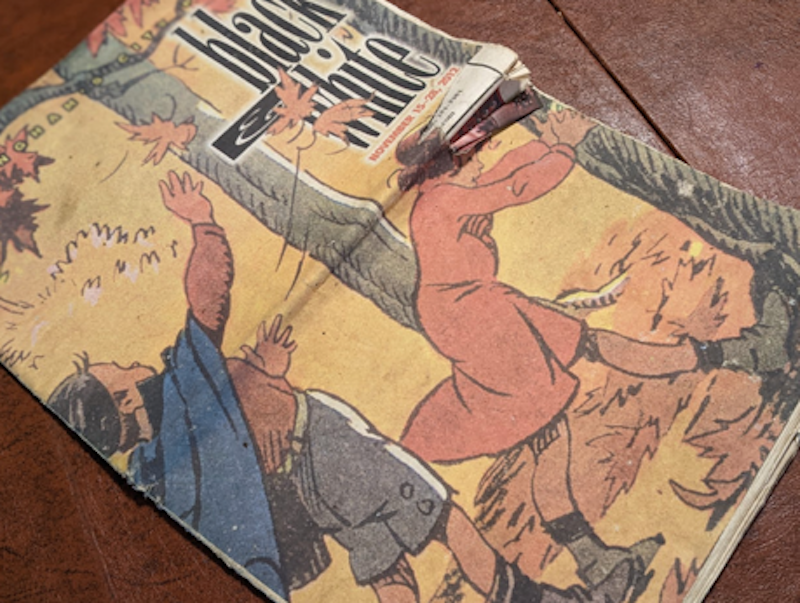 Things get replaced. The tea towel was a staple of every kitchen in the civilized world until the mass production of simple disposable paper towels. The tea towel was homier and more than functional, embroidered as it may have been by a rarely-seen aunt from Pennsylvania or Louisiana. The one-use stuff is better on the ledger, I suppose. A throwaway towel never gets the chance to build up bacteria from repeated uses. We use paper towels, of course, but still keep real towels around, and not just as decorations.

I miss city papers. They were replaced by something better, too. There were stacks of them, competitors side by side, in wire racks by the entrance of every locally-owned bar, market, and restaurant in town. Now we take a seat and fill time waiting for whoever we’re meeting by checking messages, reading national headlines, or crushing candy. This is time that used to be filled flipping through the local weeklies.

There were two here in Birmingham that were ubiquitous: Black & White and Birmingham Weekly.

Black & White was billed themselves as Birmingham’s city paper and were run by hipsters who made sure to be on top of whatever scene was happening back when keeping on top of a scene was work. They had to get in their cars and go to events. They dressed in whatever was trendy at the time which, since for most of their existence what was trendy was an adherence to not looking trendy, was loose-fitting jeans with a flannel work shirt or a banded collar button-up with tight fitting jeans depending on the formality of the art/concert/wine tasting venue.

Their paper looked good. It was a tabloid, stapled, and, despite the name, color-printed. I still have the November 15-28, 2012 copy. There’s nothing particular about that issue that would lead me to keep it. It was laying around the house when I cancelled my newspaper subscription after realizing I was getting most of my news online and the subscription price wasn’t worth the crossword alone. I used to lay out newspaper on the bathroom counter to catch clipped whiskers when I trimmed my beard. Now the Black & White does that. It lives on top of the toilet reservoir under a stack of Calvin & Hobbes and crossword books until needed. I hadn’t realized until now that my issue is on the cusp of its 10th birthday.

Inside is a review of Iron Curtain: The Crushing of Eastern Europe, a feature written by a guy I used to work with, about the Thanksgiving dinner when his in-laws found out that he meant everythingwhen he said he likes ketchup on everything, and an article about a local beer festival. My favorite was called “Ask Dave,” a fake advice column that ran with the introduction “Dave’s a handsome Ph.D. who got lucky one day and figured it all out. Now he’s sharing his wisdom and insight with teens across the nation.” Black & Whiteput out a consistently good paper. It looked like they really took pride in their jobs and kept readers abreast of cultural happenings.

Their competition, Birmingham Weekly, had two very good journalists who were fantastic on local politics (one of whom has made a name for himself both locally and nationally). Their best stuff was serious coverage of city hall and scandals arising from those in that orbit. I don’t remember much about their other content other than that they’d occasionally have an article or two by a local college student—some sophomoric, others pretty good—and there were a few syndicated bits like “Wacky Astrology,” which I’m certain isn’t what the column was actually called although the name conveys the gist, and “News of the Weird.”

One syndicated column I specifically remember was “The Budget Gourmet.” The subject was stupid and the articles were formulaic—the combination making it an absurd delight. It was a column reviewing new additions to national fast-food menus, and was as wonderful as it sounds. He’d start the column of with “This week I reached out to my local [fast food chain] to try the new [Deep-Fried McWhopper Fiesta Wrap]. Boy was it good.” He’d follow with a brief description of how happy he was to have tried whatever the item was, and then write “Here’s the blueprint,” to introduce a list including ingredients, calorie count, cholesterol, and amounts of other stuff tracked by the USDA, and that was that. Simple, lazy, recommendations that are bad for you, and still a money maker. “The Budget Gourmet” was as European a view of American as I’ve come across. It was always the first thing I turned to.

Most importantly, Birmingham Weekly had a necessary set list page so you knew what band the people who ran Black & White would be listening to at the Nick, what all the sorority girls would be swaying to at Zydeco’s, and what band all the local musicians, after their gigs, would be going to over at the Oasis. They listed all the music venues, but those three were the important ones. The list was printed on both sides of the center page so you could easily lift it out of the paper and stuff it in your glove compartment or center console. It was the onboard navigation system of the time, at least in the evenings.

Now, if you’re the first to arrive somewhere you can reach into your pocket and pull out The New York Times, any number of eBooks, or chat with friends thousands of miles away. I miss the local publications, but we’ve found something else. The city paper has gone the way of that other rag, the tea towel.