The Robot That Won the Spelling Bee

The story of a robot that turned the spelling world on its head. 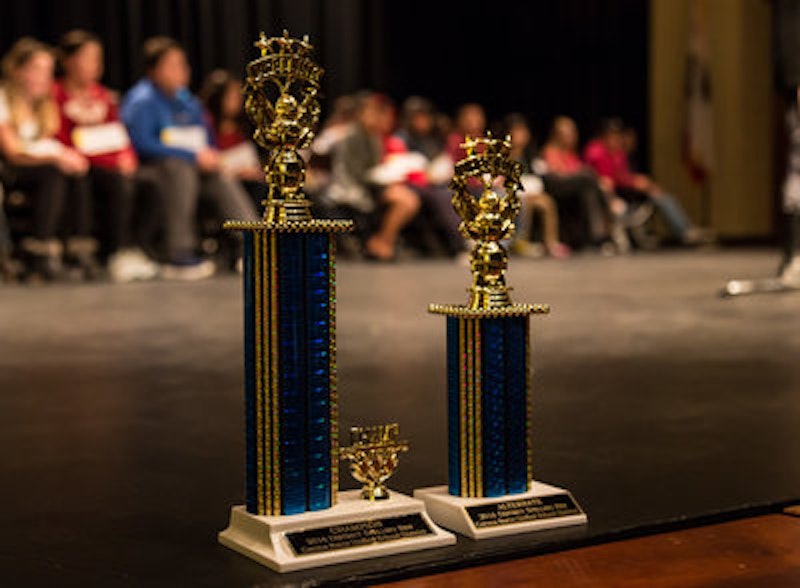 Leopard Forrest strode to the podium with the sort of confident winner’s gait that came easily to a man who’s never tasted defeat. With his baby blue eyes, flaxen locks, and Little Lord Fauntleroy outfit, he quickly captured the hearts of all 539 spectators in the high school gymnasium where the 15th Annual Citywide Spelling Bee was being held. Despite fierce competition from an experienced field of orthographers, Forrest expected to successfully defend his title.

Leopard Forrest was a natural. Immigrants who had just passed their citizenship examinations often mistook him for the American Dream. Schoolboys would play hooky on his account, dodging the lash of the truant officer as they wended their way to his apartment to beg for autographs. Mothers supplicated to various saints and idols in the futile hope that their children would grow up to be as successful as he was.

“Leopard Forrest is the man to beat,” intoned sports legend and color commentator Herc Broadsides. “Ten times the city spelling champion, and I have it on good authority that he hasn’t misspelled a word since he learned to walk.”

“He’s a beautiful player,” added crackerjack investigative journalist Trace Crabtree, who’d been assigned to do the play-by-play for this event. “I can’t think of any other athlete who has made such an impact on his sport.”

“Other than me, you mean,” Herc joked, elbowing Crabtree in the ribs. “Because I made a big impact on my sport, you know. Real big, ha ha ha. That’s what I’m trying to say, get it? Reaaallll beeggggg. The biggest.”

“Yes, other than you, you were a big deal in one sport or another,” Crabtree said with mock or perhaps real irritation. Who could tell with that guy? He had a Bing Crosby-esque rubber face and was always a real professional, especially when it came to pandering horseplay in the broadcasting booth. “Anyway, Leopard’s facing his stiffest test tonight. In addition to the usual rogue’s gallery of baby geniuses and hen-pecked savants who qualify for these events, he’ll be up against a spelling robot.”

At nearly seven feet tall, the robot bulked large over the doughy, awkward youths who were standing next to it. It was covered with gears, wires, widgets, dials, and other mechanical doodads.

The Evil Genius stood a few paces behind his creation, fiddling with the joystick on the Atari 2600 controller he used to operate the robot.

“Are you nervous?” asked well-tanned television presenter and interviewer Maggie McCleary, aka “The Queen of the Red Carpet.”

“Man has maintained his primacy in spelling only because he has refused to take up the gauntlet thrown down by machine. This is long overdue,” the Evil Genius said.

McCleary nodded, flashing a row of capped white teeth that weren’t so much pearly as brilliant purple. “So how does the robot work? Is it some of that whiz kid tech boy stuff I’ve been hearing about? The Internet and the worldwide web and whatnot? Blogs, maybe?”

Although the Evil Genius believed that such rudimentary questions were beneath him, he understood that the general public deserved an answer. “I have programmed a list of all of the words in every known language into the robot. Unless someone has programmed such a list into Mr. Forrest, he will not win.”

“Dr. Genius, ma’am. And we’re talking an MD, not just a PhD,” the Evil Genius corrected her. “But yes, I expect that this moment will rank with Prometheus’ theft of fire and your government’s sabotage of the USS Mainearmored cruiser.”

The panel of judges started Leopard Forrest with “amaurosis,” a gimme for a man of his considerable talents.

A showman to his core, Forrest made a big production of rubbing his temples, mopping his brow, and doffing his beanie to scratch his head. After the judges notified him that he had 30 seconds left to spell the word, he winked, blew a kiss to the spectators, and then proceeded to rattle off the answer.

“Leopard Forrest demonstrating the kind of stage presence that has made this sport so popular with filmmakers and documentarians,” Trace Crabtree explained.

Forrest did a stutter step followed by a soft-shoe shuffle as he made his way down from the podium.

“What a grandstanding clown,” the Evil Genius said to his robot. “Now’s our chance.” He pressed a button on the joystick and the robot rumbled to life. Various light bulbs and digital displays flickered on the robot’s huge body.

Maggie McCleary tried to get the Evil Genius’ attention. “Why are there all those short extension cords plugged into one another? Couldn’t you have just used one long cord?”

“Shut your mouth, Midge. You’re about to watch history in the making,” the Evil Genius said. He pushed the joystick forward and the robot lumbered to the podium. Although it possessed neither the confident gait of a winner nor the ability to instantly capture the hearts of 539 spectators, the robot cut an impressive figure.

“This is what we’ve been waiting for,” Herc Broadsides said in a hushed voice.

“The word is ‘larmoyant.’ Please spell ‘larmoyant,’” said one of the judges. “Fuck you,” replied the robot in a pleasant voice that had been phase vocoded by its Auto-Tune software.

“What? What did you say?” asked the judge. “The word is ‘larmoyant.’ Please spell it.”

“Fuck you,” the robot reiterated before shutting itself down.

A pall descended over the silent crowd.

“Oh god yes,” the Evil Genius exulted. “Marge McCleanly, how about that? Wasn’t that something?”