To think means to deliberate, explore, and make valid arguments and conclusions. 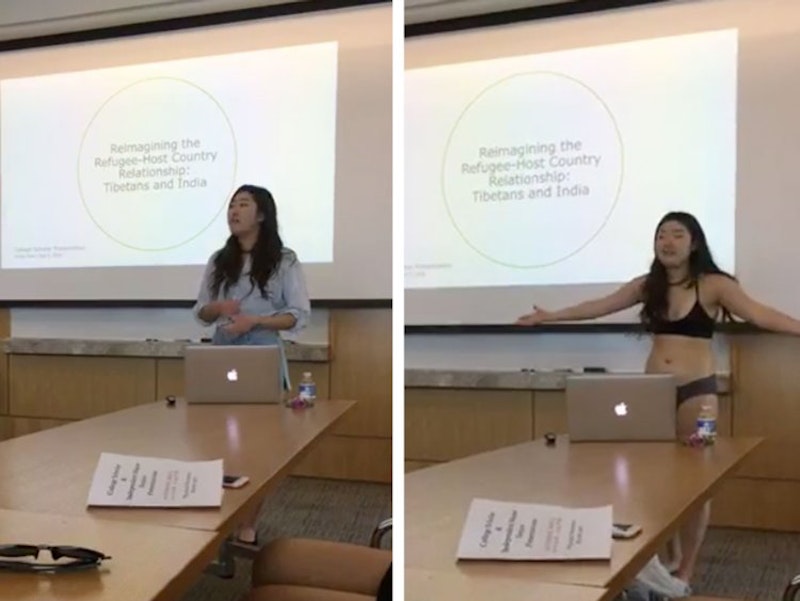 In the latest episode of “The Bold and the Unhinged,” a student at Cornell University took a creative path in presenting her senior thesis. Leticia Chai wore nothing but underwear. Usually, before presenting a project like that, normal people would have a fear of entering the room naked or forgetting to put on their pants. But Chai is clearly far more evolved than us and being almost naked in front of professors and other students is considered a brave blow to those awful patriarchal structures of society.

Judging from the article in The Cornell Daily Sun, Chai’s decision to strip was precipitated by a professor who questioned her original choice of attire intended to wear during her trial run of a presentation. Chai wore “blue button down and cutoff jean shorts.” Presumably, right before the event, the professor in question (a woman) allegedly said to Chai, “Is that really what you would wear?” The statement was purely aesthetic but Chai made that jump into the political and the oppressive. She gave the middle finger to the perceived authority.

On one hand, I don’t blame Chai for having such a reaction, which was authentically anti-authoritarian. The professor could’ve approached this differently and said something more implicit but she, too, had an honest reaction. On the other hand, just like many misplaced anti-authoritarian reactions, Chai’s protest lacked reason.

Looking at this spectacle from a phenomenological level, Chai’s stripping in front of faculty and students was at its core distracting, rather than a political or a feminist statement. How can anyone focus on the content of her presentation while staring at an almost naked body? This also revealed that Chai didn’t care enough about the topic of her thesis, which is on “rehabilitation of displaced people and refugees.” In a single act, Chai has implicitly proved that she cares more about proving an ideological point than bringing forth new knowledge and enlightening faculty and students with her research.

What makes this event even more foolish is that Chai urged others to strip. Amazingly, people followed her directive. For all the uniqueness and originality that’s claimed by students in academia, this alone is an act of collectivist thinking. But can we really call it “thinking”?

To think means to deliberate, explore, and make valid arguments and conclusions. This event of foolishness is calling into question the validity of higher education. If everything is performance art, including academic work, then why do schools even exist? Why the pretense that students are learning anything, except how to be “good” radical activists?

However, Chai’s chosen form of personal spectacle shouldn’t come as a surprise. Faculty in higher education have been “teaching” students not only that it’s necessary to be against tradition but they’ve been coaching them in ways on how to dismantle and attack order. The irony is that Chai was somewhat scolded for being anti-authoritarian despite the fact that the academic system of the university is based on subverting authority. But here’s an example of the limits and contradiction of ideology. Academia works on an ideological principle of freedom limitation. It uses euphemisms that create an illusion of students’ freedom because students are not only supposed to be sycophants but also excellent parrots of ideology.

But there’s no freedom in academia. Even those students who follow the “rules for academic radicals” aren’t allowed to stray from the imposing grid of coercion. Structurally similar to socialism, anti-traditionalism in higher education is determined by an academic hierarchy and students are mere pawns in the game of Marxist chess.