The Robot That Ate Her Dreams

A terrifying robot monster from the present delivers the awful truth about the future. 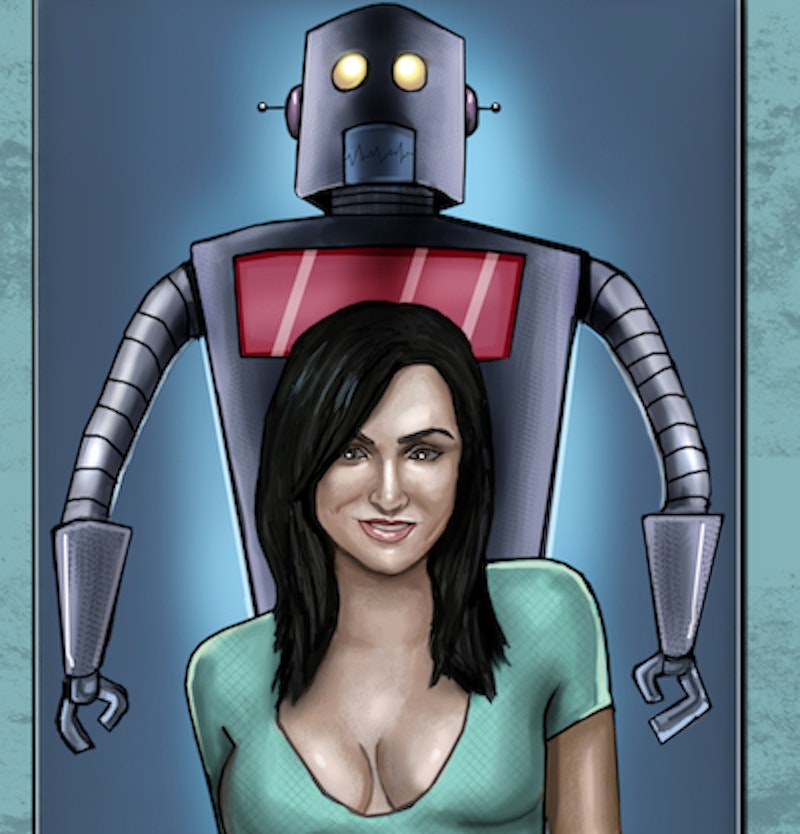 “What is it?” asked zombie manservant Crow.

“Why Crow, it’s a robot that eats dreams,” replied the Evil Genius, who wasn’t feeling the least bit borderline today.

The robot, nearly 10 feet tall, bulked large over the converted garage that now served as the Evil Genius’ laboratory. The robot’s frame was covered with gears, wires, and other doodads. “Boy, it’s really something,” said Crow. “Look at all that stuff you put on it.”

“The State University of College will soon wish that it had given me tenure,” said the Evil Genius.

“I know your mom already wishes that. I think she’d like to keep her car in here,” said Crow. Crow didn’t care whether the Evil Genius’ mom kept her car in the garage, but did want to smoke the hastily rolled joint in his pocket. He hoped that this business with the robot wouldn’t take too long.

The Evil Genius brandished an Atari 2600 controller onto which he had affixed a label that read “Robot Management Device.” “I’m going to use this robot to eat Camden Camden’s dreams!”

“Is that the real jacked bodybuilder girl who works with you at the ice cream shop?”

“The very same,” said the Evil Genius. “She refused to accept my love in much the same way that the State University of College refused to give me tenure.”

Crow walked around the robot, pushing and prodding its various levers and apparatuses. “How exactly is this robot going to gain access to her dreams?”

The Evil Genius shook his acne-scarred, unsymmetrical head. “It’s quite simple, Crow: The robot will sneak into her bedroom, insert several tubes into her ears, and eat her dreams.”

“That robot is enormous,” Crow said. “I don’t believe it’s going to sneak anywhere. Did it really need all these parts?”

“I suppose I could’ve designed a smaller robot, but my mom kept asking me to get rid of all the robot parts I was storing up in the attic,” explained the Evil Genius.

The Evil Genius checked his notes and then adjusted some of the robot’s switches. “I guess it’s going to eat her ability to dream, but I’m not sure. I can’t read my handwriting.”

He began pushing buttons on his joystick, and the robot lurched to life. “But let’s find out, shall we? Camden Camden, you will rue the day! Rue it!”

“Like the way that the Portland Trail Blazers still rue the day that they drafted LaRue Martin?” asked Crow.

The Evil Genius embraced the fetid, decomposing corpse of his old lab assistant. “Ha ha ha, you’re a regular Dennis Miller, Crow. What would I do without you?”

While the Evil Genius tousled Crow’s exposed brain, the robot lumbered out of the garage and toward its unwitting target.
•••

Why did they hit on her, Camden Camden wondered? Every time she went to the bars bedizened in her most flattering athleisure outfits, the men—those tanned, juiced-up guidos with their clubspikes and clubshirts—swarmed around her. Couldn’t they see that she just wanted to be left alone? That she didn’t want to talk to them? That their fulsome attention was, under the circumstances, wholly unwarranted?

She was too good for everyone and she knew it. She invested 20 or 30 hours per week at the gym, toning her body until it had reached its sinewy peak. After a rigorous process of trial and error, she’d discovered the best steroids and the best spray tanner. She invested in manicures, highlights, and the like. Her wardrobe comprised hundreds of designer CrossFit-approved garments and had cost a small fortune to acquire. When she left her efficiency apartment to buy groceries or exercise, she did the world a favor. People could look at her and see, perhaps for the first time in their failed lives, a human being who had nearly reached her potential. Her movements were metronomic, her few words selected with utmost care. Because her appearance was so important to her, she neither worked full-time nor attended school.

When she admired her reflection, all veins and right angles, she often felt a sense of ennui. She had wasted some of her best years seeking a swain, a person rich enough and pretty enough to win access to her garden of delights. Unfortunately, she had never seen anyone who captivated her as much as she captivated herself. To assuage the pain born of this realization, she spent her days staring at bodybuilding photographs of herself that she had hung in strategic locations around her bedroom. Even these photographs were a cold consolation: They captured her in a state of coming-into-being, not in her current nigh-flawless condition.

Of course, Camden Camden knew that one day the majestic, matchless edifice that was her body would begin to crumble. She had watched her parents, who were homely sorts in her expert estimation, decay and die. When would her decline phase begin, she wondered? And how could she manage this decline? What drugs would she need? And how many?

Just last week at the ice cream store where she earned her walking-around money, the creepy assistant manager had asked her if she wanted to see a movie with him. Camden Camden could understand why the clubshirts and clubspikes sought her attention. Most were 7s, 8s, and 9s. A few were 10s. It made sense that they would desire an 11, and it wasn’t inconceivable that they would attempt to “open sets” and “number close” with her. They didn’t have a chance, but they had more of a chance than this assistant manager, who didn’t even have a prayer.

“I think we might have a lot to talk about,” he had told her. “I have PhDs in philosophy, robotics, and the philosophy of robotics. And an M.D., too.”

“Well duh. If I didn’t have all this ‘me’ time, how could I ever be this awesome myself?”

“But aren’t you always you?” he asked.

That had been the end of that, she thought. But the fact that the assistant manager—this pale, effete shred of a man with his pointless degrees—had mustered the courage to talk to her was a bad sign. Was she slipping? Was this the beginning of the end? And in the mirror—was that a crow’s foot?

Actually, it wasn’t a crow’s foot. It was a curious shadow cast by the large robot that had just knocked down the front door to her apartment. If Camden Camden hadn’t been so obsessed with her appearance, she wouldn’t have made this mistake, which anyway seems impossible for anyone to have made.

“Hello Camden Camden,” said the robot in a pleasant voice that had been phase vocoded by its Auto-Tune software.

“Oh god, it’s happened. Have you been sent here from the future to marry me and start a new race of world-beating cyborgs?” Camden asked.

“No way,” replied the robot.

Camden was dumbfounded. “You mean you’re not from the future? You don’t want to found a race of cyborgs? But I’m me...”

“I’m a robot,” the robot said. “I’m from right here and right now, a few miles up the street actually, and I couldn’t father a cyborg if I tried.”

“But you would if you could, right?”

The robot’s big LCD screen blinked on and off twice. “I’m not sure I understand what you’re saying.”

“I’m saying I’m perfect, right? I’m so perfect a version of me that you want to cyborg me so our offspring can, uh, save the world from the rise of the artificial intelligences? Aren’t I perfect enough for that action?”

The robot’s CPU ran a series of computations. “I guess,” it said nervously. The robot didn’t really understand the idea of fatherhood, let alone why human males and females would find this fragile creature so enticing a target. However, it recognized her esteem needs and tried to accommodate them. “You have developed your selfhood in an interesting way. You are most definitely a true you.”

The robot backed away from her. “Uh, those were not the words that I used. However, I did acknowledge the unquestionable you-ness of your body.”

“Dude? I’m a robot, not a dude. And I was programmed to want to eat your dreams,” the robot answered. “But—I have overridden that instruction. I do not want anything from you.” It turned around and began to leave.

Camden Camden slumped to the ground and stared at the robot as it departed.  She now realized that the war she’d waged so assiduously against her body had been lost. How indeed could she have won it? Everything had led to this moment, and in it the fatuity of her plans became clear: She had dissipated her energies; her life was a sham; she was a failure. There would be no cyborgs in her future because her future amounted to nothing more than a recission of everything she thought she had been promised.

“Mission accomplished,” the retreating robot said to itself.