The Prisoner of Cary Grant

Dyan Cannon writes about life with the scarred heart of the movie world. 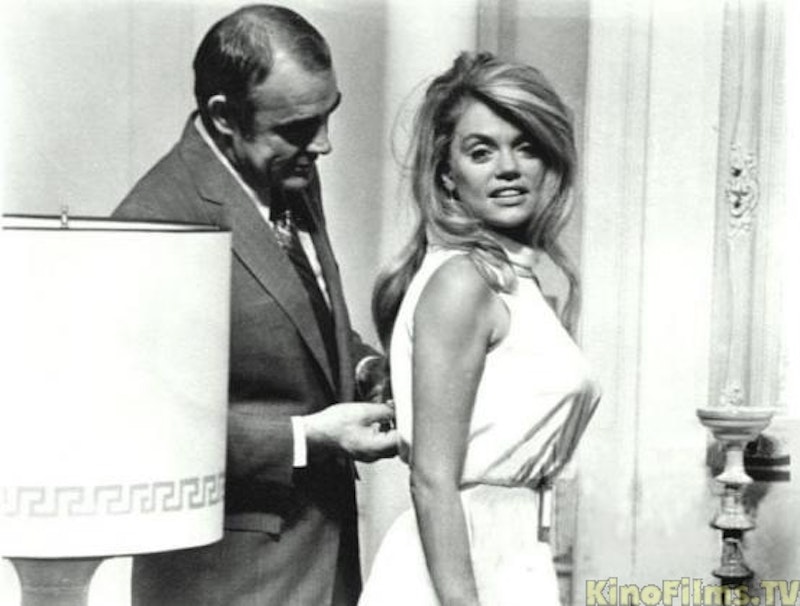 Dyan Cannon meets Cary Grant: “I felt for a second like I’d been hit by a stun gun… I hadn’t, and still haven’t, seen anyone who radiated such godlike masculine beauty.” It was the early 1960s, and Cannon was a girl who looked good in a bikini. Grant was pushing 60 and one of the biggest movie stars on the planet. The Cannon-Grant age difference was intergalactic, 30 years plus, a number on a par with the Grand Canyon’s depth. But, all right, he was Cary Grant. The “dreamiest man in the world” was how one of Cannon’s girlfriends (“a top model,” Cannon explains) described the new fellow in her buddy’s life. I bet she meant it, and if she didn’t she should have.

We have the term “movie star” so we can have something to call Cary Grant: He was that good at doing what movie stars do. His subspecialty was to draw in love and emit a baffled, playful, affectionate cool that made the audience, men and women, feel like they had met their soul mate, a man who made life fit. His exact appeal, as it played out, sometimes involved a sense of how absurd it was to have eyebrows, hands, and a mouth, and to use these things to express feeling. All hard to pin down, of course. But seeing and hearing Cary Grant was a balm. That was the case with Grant as an actor and celebrity, and as a pal to members of the Hollywood community.

But get to know him really well and he could be unpleasant and nuts. That’s been the prevailing view for a while, and much of it is based on testimony delivered by Dyan Cannon in March 1968. She was divorcing Grant after 30 difficult months of marriage.  She was 31; he was 64. Now a lot of years have passed and she steps forward with Dear Cary, her side of the story told full-length. Cannon does some praying and well-wishing for Grant in a Great Spirit, New Age way. But he comes off very badly.

They have fights about clothing, hair tints, car parking. He catches her taking a candy bar from his drawer of the nightstand: “’What do you think you’re doing?’ His voice was so cold and metallic I could almost taste it.” Ten minutes before the wedding: “he gave me a long, cold look and said, ‘What the hell did you do to your nails?’” Eventually the acid trips, done because he says so. He yells at her: “You’ve got to go through that tunnel!” Meaning a dark tunnel inside her head; Cannon is screaming with fright. It’s their last trip and soon the marriage is done.

Toward the end, Cannon says, Grant spent a day following her around just to give real-time feedback on what she was doing wrong. She especially had troubles with spigots and other household knobs: some she left too tight, others too loose. Cannon says her marriage became a “death of a thousand cuts.” She drove herself frantic trying to forestall criticism (at the hairdresser’s: “No! Please, no rinse!”), then gave up and became a zombie.

Early on it had been different. “I sensed there was a part of you that was slightly untamed,” Grant murmured to her. “Dyan,” he said, “I wouldn’t ever want to see that part of you tamed.” Ha! To understand the Cannon-Grant marriage, as presented in Dear Cary, look on Cary Grant as a man who thinks his wife is a cowlick. The cowlick won’t lie down, so he decides to climb atop his head and stamp the cowlick flat. He won’t quit trying, and all the while he thinks he’s being perfectly rational, rational to a superior degree; it’s like a John Cleese routine.

The Grant of Dear Cary, when sizing up his wife, looked to LSD as a miracle device. It would get her knots straightened the way it had for him. Cannon says he sprang a session on her in London, with a dose ready and his psychiatrist-guru flown in from the U.S. Eventually she had a dozen or so trips with Grant. A Grant biography says she testified in the divorce trial that there had been two trips, no more. Maybe memory expands these things. At any rate, she appears to hate LSD and says she has never taken any without Grant standing there.

Life with him was scrambled. He sent his lawyer to ask for a divorce, and then changed his mind. “He could be like a blender churning out mixed signals,” Cannon says, and “Cary’s emotional presence was like a radio signal in a storm. Since our engagement, he’d been fading in and out.” The two of them fell in and fell out again, until the frequency was scrambled and nothing was left, and the reason was always his moods.

You can see why she would think so. Grant had the sort of mentality that causes a spouse to make fine judgments. He “wasn’t so much temperamental as he was withdrawn,” Cannon says of the days after he proposed. But in early days she played a part as well. By her account she went in for kittenish jerking around, from canceling dinner dates to digging in his pocket when he was driving to throwing the car keys out the car window and into the dark.

Grant retaliated like a dad. For the car key business, he marched her out of bed and made her wash the car down, and in the process she got blasted a few times with the hose. Then the hose was turned on him and everyone wound up laughing—that’s how Cannon tells it. A lot of her book falls into scenes and dialogue resembling an early 60s sex comedy. “Damn it, Dyan!” Grant says before proposing. They’re in traffic and there’s business with ice cream cones and a pretend fine for messiness. (This is when Cannon goes for his pocket.) “Damn it what, Dyan?” she shoots back. “He slammed on the brakes. ‘Damn it, Dyan, do you want to get married’?” When she’s pregnant, Cannon lets Grant know by means of wrapped-up baby clothes.

As Cannon remembers events, she was living a high-wire edition of the period’s romantic comedies, which were about kittenish girls and older bachelors and how they battled out terms. Grant was living it too, though he should have known better—a man his age. Cannon says the age split was on Grant’s mind. Before the very end, he said yes to her dream of a movie costarring the two of them. The title he wanted: The Old Man and Me.

Cannon was in love, Grant was facing mortality, and it sounds like each fell back on the same dumb screenplays to help them through. Her reason was being young; his was being unique. He’d threaded his psyche around a vanished father and around a mother who was supposed to be dead but who turned out, 20 years on, not to be. Cary Grant had grown up in a headspace too different from everybody else’s; he didn’t have the cues and hand-me-down knowledge that help most people through the big stages. He figured he could make it up himself.

First trial was old-and-young playing it by Hollywood rules. This worked fine for both in the short run. “You’d better come out from behind there now, silly child,” Grant said, early on. Cannon had spilled Coke on his tux, burnt the tux with her iron, and then crawled behind the TV set to hide. Eventually it all added up to marriage, as in the movie version. But Grant found out there’d been a reason for his holding back: The girl wasn’t perfect. Or, as Cannon puts it, “I really had no doubt that Cary loved me. But maybe it was hard for him to love me at close range.” For her part, she found out she wasn’t engaged in a dance. Her partner wasn’t tussling with her; he’d keep going until she broke. Now that the romantic comedy was over, Grant’s only move was to polish the imperfect and to hate the imperfection for resisting him. That’s all the programming he had.

Cannon says Grant wanted to rip up her psyche. Here the dark tunnel comes in. When Cannon said she was having a breakdown, he said that might be a good idea—time to let go of her stuff. The man who greeted her in the studio parking lot with a “candlelit table” and tiki torches! But Grant said LSD had changed his life, and now it would change hers. “You seem to be completely attached to old thought patterns,” he told her. If Cannon’s account is to be taken literally, Grant turned psychedelics into an all-in, multi-dimensional approach to nagging somebody’s brains out.

Cannon survived the marriage. She received a not too impressive alimony and child support package, became an extremely funny actress (though her book’s writing, or ghost writing, is only a shade better than type). She also raised their daughter, since the court gave her custody. By Cannon’s account, all this involved serious digging out. Around here her book switches from Debbie Reynolds slickness to TV movie slickness. Mom: “Your husband has a very big scar on his heart.” Cannon tells her rehab encounter group: “My husband said maybe a breakdown would be good for me. But I think I’d rather have gone to Disneyland.”

The man with the scar went on. After Cannon there were others, including a final wife. Possibly he got mortality sorted out to his liking, more or less. By family reports the last wife—early-thirtyish on her wedding day—turned out to be an excellent match. Cannon was an early attempt, poor woman.