Nonentity in the Holy Land 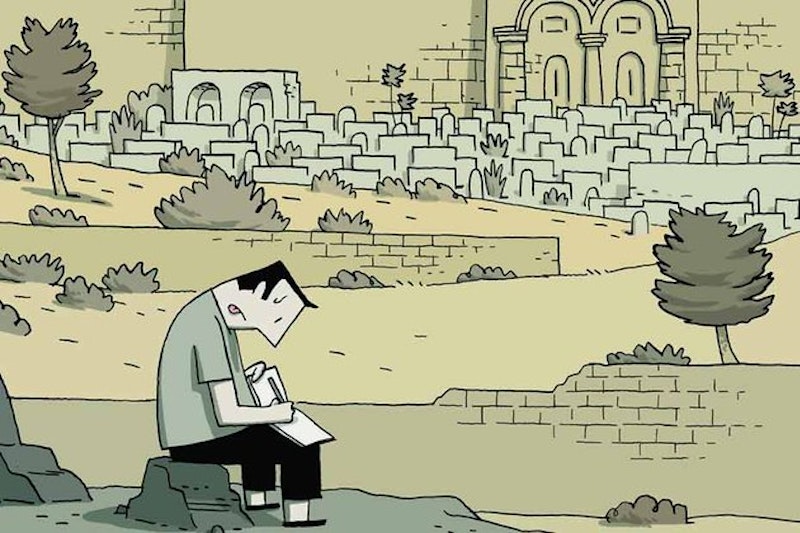 In one sequence from Guy Delisle's autobiographical Jerusalem, the artist attends an exhibition of his own work at Nablus University in the Palestinian West Bank near Jerusalem. In the opening panel of the sequence, we see a long shot of the gallery. Mostly (literally) faceless people stand around chatting while in the distance the artwork hangs on the wall. The pictures are so far away you can't make out any of the drawings; just tiny blank squares.

It's an image breathtaking in the aggressive blandness of its narcissism. There's no effort to pretend that we're looking at anything interesting; no suggestion that there's a worthwhile story. We're here solely because Delisle was here, and he was here because it's an exhibit of his own work. And just to emphasize the banality, Delisle has us explicitly looking at images of his own images which he hasn't even bothered to draw. It's as if the effort of creating a picture worth viewing would distract from a celebration of his own gloriously quotidian essence. He's made himself tiny so that he can block out everything else.

That one panel may not exactly be typical, but it is emblematic.  Jerusalem is in the well-established autobio comic tradition of low-key slice of life nothingness. It chronicles the year French-speaking Canadian Delisle spent in Jerusalem with his family while his girlfriend worked with Doctors Without Borders. Maybe if his girlfriend had written it, it would have had something to say, but, as it is, Delisle is a tourist, and he's got little to tell us that we didn't know coming in. The Israelis treat the Palestinians badly—check. Jerusalem is a giant mess—yep. Caring for small children in a foreign city where you don't know the lay of the land is exasperating—not something I'd necessarily thought through before, but not exactly earth shattering either.

Early on in the book, there's an entire page explaining that Israel considers Jerusalem its capital but the international community places its embassies in Tel Aviv, and that there are similar disagreements over borders and territorial claims. It's not rocket science—I'm no expert on the Middle East and I've basically heard it all before. But Delisle has himself sitting there acting like he's being presented with some sort of complex multi-layered revelation. "So we're in Israel, right?" "But Jerusalem is the capital of Israel, right?" And then he finishes up by declaring: "I don't really get it, but I tell myself I've got a whole year to figure it out…" Either he's stupid or he thinks his readers are.

If this were a book or a documentary titled Jerusalem, the creator's lack of even rudimentary knowledge or insight would generally be a bug. But it's an autobio comic, so the less intelligence and insight on display the better. How else to explain the studious ugliness of the color scheme? Though there are dashes of other colors here and there, for the most part Delisle has chosen drab browns and washed-out grays; combined with his blobby, undistinguished character drawing, you end up feeling like you're staring into a mud puddle.

The blah art and thinking are of a piece. Both are in the service of an aw-shucks (I hope) faux naiveté. Delisle is a humble seeker, drawing without flash, seeing without knowledge, letting us know the truth without the distracting accretion of talent or insight. It's just one man's impressions of Jerusalem. We learn that it's awfully hard to find a good playground in East Jerusalem; that traffic is awful; that ultra-Orthodox Jews are intolerant and unpleasant; that the Palestinians in Delisle's comics class hadn't read Tintin or much else. Doesn't that tell us something, after all, about Jerusalem, about Israel, about the Middle East—about, humanity?