The Old Order Gets a Pat on the Head 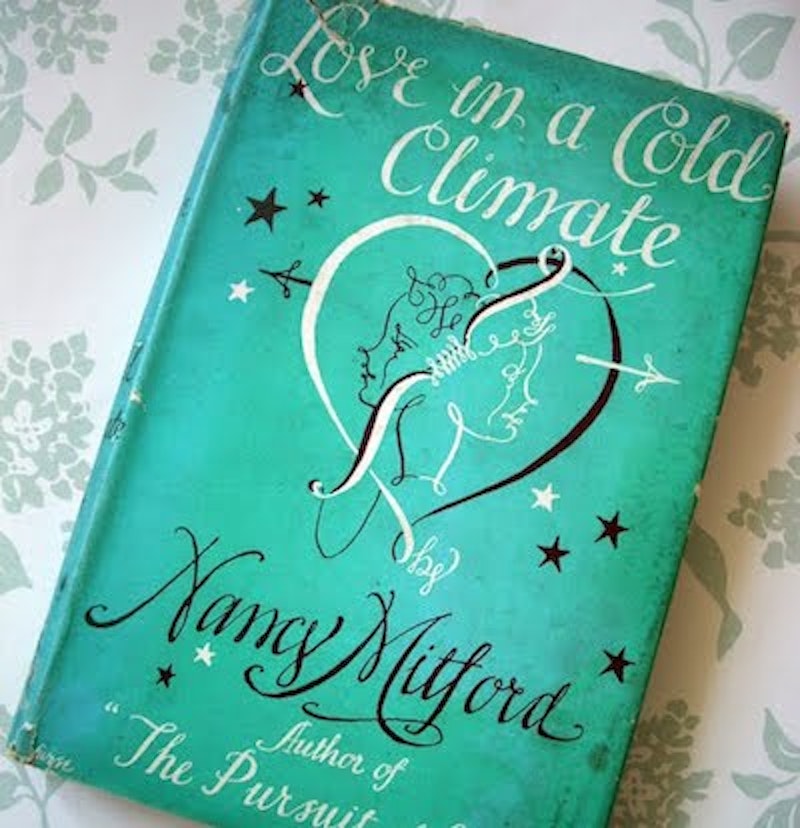 Nancy Mitford’s Love in a Cold Climate was considered grand fun when it came out. World War II had just ended, Labour was in, and the English aristocracy looked about done. Mitford said goodbye to them in a series of novels, most notably Cold Climate and the book it followed, The Pursuit of Love. It was a fond goodbye, a cheeky goodbye, a wise and knowing goodbye. Readers ate the books up. The middle class could get close to their fallen betters and make faces about them, and in between making faces they’d have a chance to marvel. See what the nobility got up to, the casual sex, the bathroom talk, the bellowing out of Italian arias.

Pursuit, the first book, presented local gentry as a human petting zoo stocked with endearing, rambunctious eccentrics. Cold Climate moved up the scale. It guyed country-house England, the crew of dowagers and men in dinner jackets who bossed prime ministers and owned mountains of wealth. Or who did so as recently as the 1920s and 30s, when the books were set. Mitford provides readers with a tour of the upper crust’s top limit, and she models the tone that steadies the tourists’ nerves: awkward but unimpressed, and sharp-tongued but not mean, just down to earth.

But Climate merely gets by. Sequels often seem lame, and this one suffers from a certain inability to find its stride. Star characters from the first book are trotted on for another turn, and not to good effect. Climate’s lead actor, the fellow who makes things happen and drives the plot forward, doesn’t show up until the book’s close to three-quarters done. Page by page, the novel mainly follows the bumping about of the narrator, Fanny, who falls into minor social scrapes that are described in detail. Meanwhile, she witnesses or hears about the events making up the story proper. This story often takes place off in the distance or around a corner, and it’s with some surprise that the mind eventually registers it as the chief thread the book has to offer.

The story runs this way. A beautiful girl-chum of Fanny marries a decrepit lecher and is cut off by her parents, the very grand Lord and Lady Montdore. Their new heir, summoned to replace the girl, belongs to the family’s scapegrace Canadian line. Upon arrival the provincial proves to be a flaming aesthete—as was then the phrase—who adores anybody (such as the Montdores) endowed with money and fine old things. This brightly burning character is Cedric, the book’s late-arriving star and the force that kicks the Montdore situation into a new shape. Under his influence, Lady Montdore loses interest in bossing prime ministers or even punishing her daughter. Her new drive in life is simply to show herself off. The great dowager beast is slimmed and plucked (to borrow the book’s language) into a vibrant, hair-dyed girl of 60. She and Cedric then lead the revels of London’s well-off young, prancing before them at a fancy-dress ball featuring indoor gondolas. The lecher who ran off with the daughter winds up becoming friends with Cedric and resumes a long-standing liaison with Lady Montdore. The daughter, who’d been getting bored anyway, wanders off with a duke. Nobody gets divorced. They just step out of their old arrangements and nudge them aside with their toes. Meanwhile, Lord Montdore shuffles off to early dinners and a quiet wait for death.

Given that the book’s storytelling never coheres, elements of the story may be freer to bounce around in the mind. For me they fall out this way: Mitford has drawn a cartoon of Britain’s old order giving up. The fine things loved by Cedric—furniture, jewelry, paintings—are the physical relics of the august, centuries-old civilization supposedly anchored by people like the Montdores. The civilization now adds up to nothing but the pretty things it’s left behind. These things are for show, and they’re adored by somebody who then turns Lady Montdore into a human bauble.

Further, she was ready for the change. Show was already the point of Lady Montdore’s life. When she angled for her daughter to marry somebody suitable, Lady Montdore wanted a chance to shine as acknowledged leader of society. The aim wasn’t family (get the kids married properly) or even dynasty (build the family’s influence and holdings). Lady Montdore proves interested in anchoring, in continuing, nothing. “So the poor little baby died,” she says, visiting her daughter’s bedside after a miscarriage. “I expect it was just as well, children are such an awful expense, nowadays.” At this point Lady Montdore has gone skinny and abandoned being a dowager. But the remark is nothing new. The daughter has no reaction to the comment, Fanny writes, because it “was too typical of Lady Montdore’s whole outlook on life for somebody who had been brought up by her to find it odd or upsetting.”

Lady Montdore’s whole outlook is that nothing matters except her comfort, and her comfort requires a steady supply of admiration for her. Once this admiration took the form of dignified tribute; now she gallivants about and flaps her arms. Either way she’s as dependent on attention as Rupert Pupkin. She’s a modern sort. That’s the surprise offered by Love in a Cold Climate, an anciently modish book that shows the new world has been around longer than we thought.