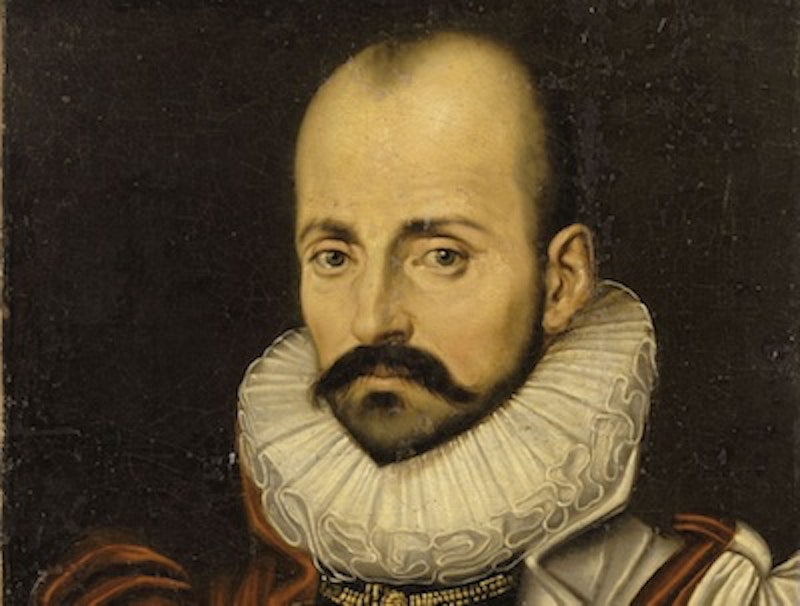 The French essayist Michel de Montaigne once wrote, “Liars either invent everything out of whole cloth, or else disguise and alter something fundamentally true. When they disguise and change a story, if you put them back onto it often enough they find it hard not to get tangled up.”

Perhaps he’s dissatisfied with these feminine metaphors of weaving and knitting; he casts about for a different, more valorous analogy, including calling lies “false or corrupted parts that have been added” to the truth, like poorly soldered pieces of metal or machinery that is out of joint. He tries, in short, to make lies out to be a foolish enterprise, always on the verge of total failure.

If only Montaigne was telling us the truth. What a world that would be!

You can try, if you wish, to imagine it. You can rent The Invention of Lying, and let Ricky Gervais imagine it for you. Or you can get down to the dirty business of living in our world, where lies are as ubiquitous as truths, and worth nearly as much on the open market. Montaigne is more forthright about the appeal of lies than about their rates of survival. For instance, he warns that children can easily make a habit of lying, and rarely give it up once they do. As it turns out, plenty of lies are durable and effective. For instance, I usually tell people that I played baseball in high school. I didn’t. I was eligible for Little League during my freshman year, and I played that. Nobody, however, has ever questioned me about my imaginary time on the varsity baseball team, and I’ve lied about it for more than two decades.

That doesn’t necessarily mean everyone believes me. I’m sure a few people don’t. It turns out that that doesn’t really matter—what matters, when it comes to lying, is who wants you to be right, and how much. Your audience should be on the side of your lie. Any good liar understands this. The whole “post-truth” era of Donald Trump’s relentlessly dishonest administration was foreshadowed by the debacle that started the Iraq War. Remember when Colin Powell testified that Iraq was building weapons of mass destruction? That was a lie, and when it was exposed as such, the reaction among Americans was really something to behold. The country didn’t care. No, it’s worse than that: a huge majority backed the lie. They were so determined to engage in a justified war, under orders from a reliable President, that they just continued to speak, talk, and behave as if Powell was right.

The same principle applies to meat in the supermarket. Most act as though the animals they cook and eat were never alive. I know this because I once helped a catfish farmer sell live fish at a Farmer’s Market. This guy—one of the most vexingly amoral people I’ve ever personally known—didn’t like spending time and effort killing the fish after he scooped them out of his tanks. For whatever reason, he’d instead pick up a huge, dull machete, slam the catfish down on a cutting board, and then ask his customers if they wanted their fish “alive or dead.” Nobody decided to cancel their purchase, since this was a farmer’s market, full of affluent people who hate giving offense. One sad buyer said “dead,” and watched my boss bludgeon the fish to death. The other four walked away with live catfishes wrapped in butcher paper. The fish all suffocated, of course, between one and three hours later.

This proves an important corollary to the thought experiment involving Schrödinger’s cat, which is about a cat imprisoned in a soundproof, opaque box equipped with poison. At any given time, there’s a small chance that a randomized, atomic trigger will fire. Then the box will activate and the cat will be killed. On the other hand, since this is only a probable event, which can only be judged retrospectively by checking on the cat and ending the experiment, there are interesting limits on what we can know until then. Until we open the box, the cat is theoretically both alive and dead. Moreover, when we do check, and find a dead cat, we don’t feel responsible for its death. The proof is the experiment itself, which is needlessly grotesque, even to imagine. Why a cat? Why a box equipped to poison cats? Why not put a priceless oil painting in a safe that will flood with water under those same conditions?

You could do that, but very often, lives are at stake. Consider the catfish. From our standpoint, the chain of causation is broken if the fish suffocates out of sight. The catfish becomes two fish: a live catfish we cherish, and a dead one that we eat. Schrödinger merely translated a fundamental moral calculus into mathematics. What’s amazing isn’t that a cat can be alive and dead at the same time, but rather that its time of death is the moment the experiment begins. It’s therefore both logical, and correct, to claim that Houston’s city planners did $125 billion in property damage to their city. That damage was already done the moment it became possible; Hurricane Harvey was just the bill coming due. And we compartmentalize such events, when we think about them, in a way that keeps us from exercising foresight and forestalling disasters.

In his epic poem Four Quartets, the poet T. S. Eliot framed the question of truth like this:

Go, said the bird, for the leaves were full of children,

Time past and time future

Point to one end, which is always present.

When you work with children, and they lie to you—which they do, all the time—it’s confusing to see how they react when you call them on it. They laugh. After putting up with this for years, I finally asked my wife how I could deliver my reprimands more sternly. “Don’t do that,” she said. “They’re just embarrassed. Surprised they got caught. And relieved to see the truth’s out there.” There’s something exciting about hiding the truth and letting it shift for itself, to see whether it will eventually “out.” The children in the garden, in Eliot’s poem, are full of giddy mischief... and so they should be. (Montaigne was wrong to eye their pranks so anxiously.) Even better than games of truth, though, is a respite from lies, distortions, omissions, and the tedious enterprise of limited honesty that we rely on most of the time. Whatever we imagine a certain person, or a crowd, or even a whole nation is able to bear... that quantity, as if by magic, always fall short of the truth.

If you leave the box sealed up, then in theory, the cat inside is still alive. It can feel like a murder to look closer than that, unsealing the experiment, startled by the animal inside. Blurred, unnamed, alive, it streaks past you all at once, towards its freedom.

—This essay is based on Montaigne’s ninth essay, “Of Liars.” It is the fourth weekly column by Joseph Kugelmass, who played high school baseball from 1994 until his retirement in 2019.