The Wall of Notebooks

I didn't want to guess how many pages there were. I'd written them all. 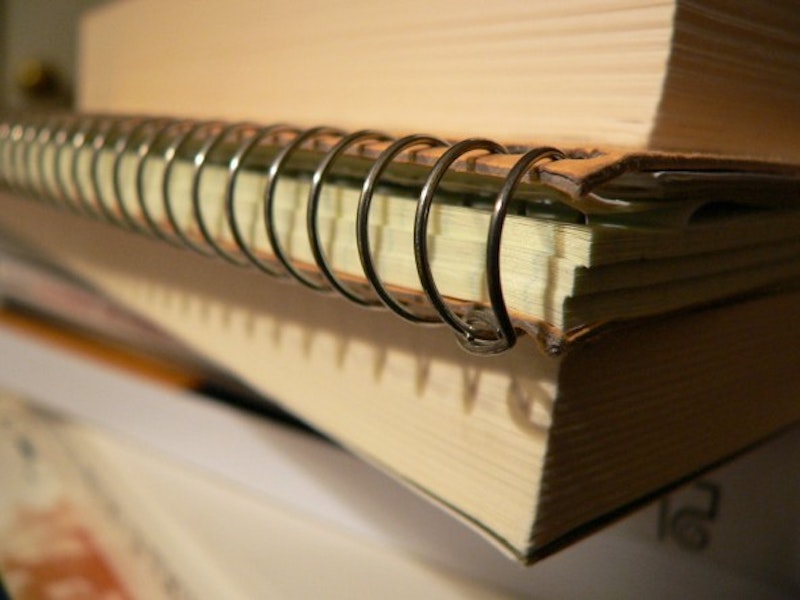 By 33 I didn’t even notice them. The notebooks had been piling up for 10 years, with a maniac spurt in production from 1988 to 1991, another in 1993. Since then it’s tailed off. Work preoccupied me, I was dealing more with people since the newspaper’s old boss was out and events there were a bit mixed up. One of my co-workers was a girl I had an affair with. She visited my apartment, and stacked against the wall near my futon there were the notebooks. “What are those?” she asked. “My writing,” I said, and she winced. At that moment I felt like we knew each other: she was looking at a fact of my life.

I started the notebooks my senior year of college, after I had done badly in the advanced writing class. My idea was that I would write a novel just for fun, with no idea of literature and teacher approval. Right from the start, I had no idea how to measure progress except by time spent and lines filled up. I was writing a novel for fun, but I didn’t like writing. For me it was too much like holding your breath—that’s what I made it into. I had no idea how to proceed, and I didn’t. Year by year, notebook by notebook, Bic pen by Bic pen, I got nowhere.

The idea of a big fun novel died the fall after I graduated. It came back many times over the next decade, taking one form or another, but always dying all over again. Then I grafted a new motive in place. At this point I was 25 or 26. I decided that here was a cumulative effect, like with exercise. If I stayed at the page and bent my mind to it, the benefits would mount up and I would become a writer. What I wanted to see, I would see, and I would set it down. To get to that point took work, and that’s what I was doing now. Notebook writing was never a waste, I thought. If you were on the subway and from station to station you were writing pages, then you were that much ahead.

The notebooks I favored were big. I liked 8.5 x 11, with at least 180 pages, and I longed for but couldn’t find big fat open lines. I wanted fat lines and the big frame because that way I could launch on my ideal writing experience. My impulses and creations would spill onto the page; being there, they would automatically become a complete prose work. In the end I learned to get by with medium lines and narrow lines. Spilling really wasn’t a problem. But the spilling never transformed into a work, and I didn’t transform into a writer. It wasn’t automatic after all. Looking back, I was overoptimistic about the role of apparatus.

I did find one notebook with the right size and the right lines. I started on it in 1988. It was a hulking thing, 300 pages or so, and had an orange cover that turned white and creased as I churned on for the next few years. The orange and the white wrinkles and spider creases became an institution for me; that cover was something I could count on seeing several days a week.

My work in it was supposed to become a fantasy novel, something that involved ancient vine-covered walls, naked skin, jewels, daggers, big reptiles, changing dynasties. Over the years it took in all that and more. But it never became a novel. The pages filled up and the notebook gravitated to my closet or a stretch of floor distant from my mattress, and then I changed apartments. By the time the girl paid her visit, the notebook was buried someplace near the bottom of the pile against the wall. It might as well have been a landslide victim, except that I didn’t think about it all that much. It was big and kept the drift in place.

The girl and I broke up quickly. If fact we’d never been together, since she was engaged. But we had our affair, and at least she came to the apartment and saw the wall of notebooks. I’m not the only one.